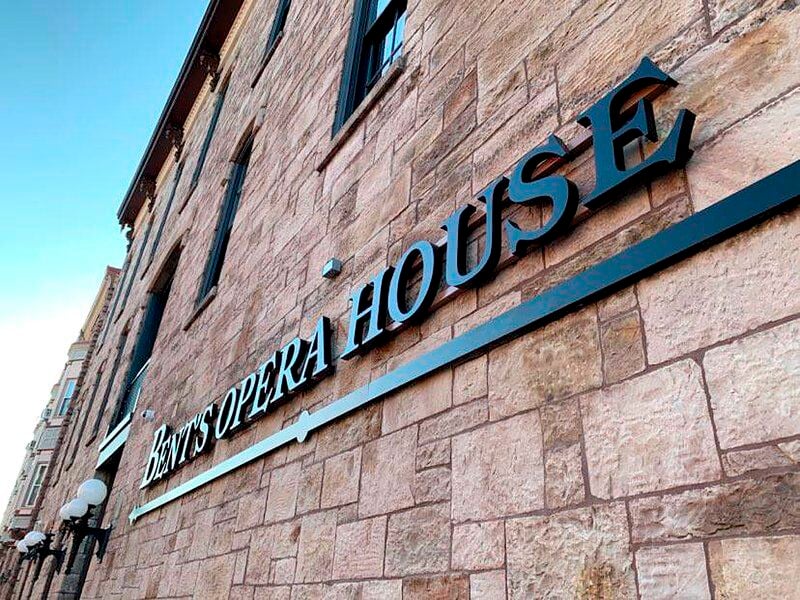 In Medina, this is the exterior of 156-year-old Bent’s Opera House in 2021, with new lights flanking the East Center Street entrance and a new sign. 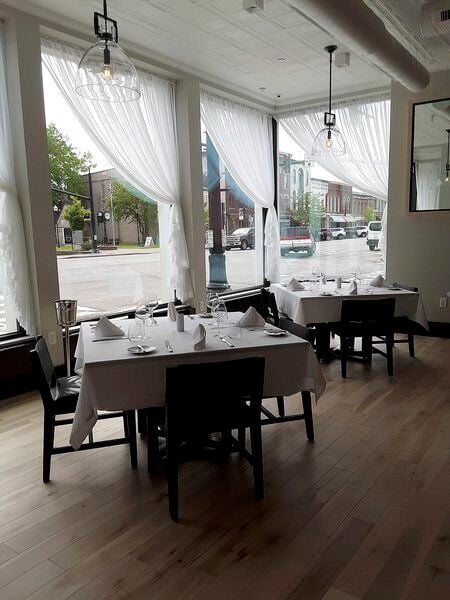 VIRGINIA KROPF / CONTRIBUTORA view of Main Street, Medina, from Harvest restaurant on the first floor of Bent's Opera House. The restaurant is scheduled to open June 24. Reservations must be made online. 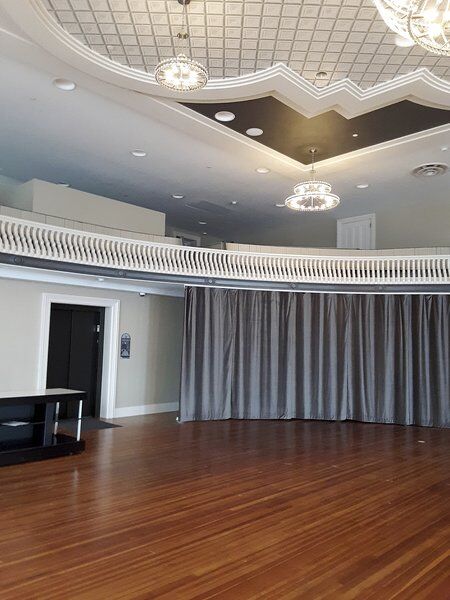 VIRGINIA KROPF / CONTRIBUTORAt Bent's Opera House, the ceiling on the third-floor opera house was painted to resemble its original three-dimensional tile ceiling, which couldn’t be saved. The chandeliers were also specially designed.

In Medina, this is the exterior of 156-year-old Bent’s Opera House in 2021, with new lights flanking the East Center Street entrance and a new sign.

VIRGINIA KROPF / CONTRIBUTORA view of Main Street, Medina, from Harvest restaurant on the first floor of Bent's Opera House. The restaurant is scheduled to open June 24. Reservations must be made online.

VIRGINIA KROPF / CONTRIBUTORAt Bent's Opera House, the ceiling on the third-floor opera house was painted to resemble its original three-dimensional tile ceiling, which couldn’t be saved. The chandeliers were also specially designed.

MEDINA — On the evening of June 24, the community will witness a historic event: the reopening of the building at Main and West Center streets known as Bent’s Opera House. The completion of nearly four years of restoration work will be marked with the opening of Harvest, a farm-to-table restaurant. Reservations will be required to enter the building.

The building, which through the years once housed Bent’s Opera House, Medina Eagles Lodge and Bank of America, was in danger of collapse when it was purchased in 2016 by Medina native and entrepreneur Roger Hungerford.

In hindsight, Hungerford might have thought twice about purchasing Bent’s Hall.

“I had no idea what I was getting into,” Hungerford said. “What I expected to be a several million dollar project turned out to be much more. Still, it is on a key corner of my hometown and I knew I could develop multiple businesses within it that would result in it being economically rebirthed.”

Bent’s Opera House was built in 1864-65 by well-known sandstone architect and builder Patrick O’Grady, a Medina native. Built at the height of the Civil War and the Lincoln presidency, it is one of the oldest surviving opera houses in the United States. It was named for a local farmer who owned the property and had the structure erected. For many years it was a prominent venue for concerts, plays, shows, commencements, elections and public functions. P.T. Barnum and “Buffalo Bill” Cody were among the hundreds of touring performers who entertained on Bent’s stage.

Gradually, the opera house as a performance venue fell into disuse, especially with the advent of movies. Over the years, the Medina Eagles Lodge had quarters on the second floor, and in 1970, the first floor became home to the first of several banks, the last of which was Bank of America.

By the early 2000s, Orleans Renaissance Group had taken an interest in the building, particularly the third-floor opera house, and began correspondence with Bank of America to take it over. In 2010, BOA announced it was leaving Medina and agreed to donate the building to ORG.

“We immediately set out to determine the condition of the structure, what might be needed to restore it, and do an extensive study of its history,” said Chris Busch, ORG president.

The organization had some basic engineering assessments done and discovered the building was in severe distress. It was in need of substantial and extensive structural remediation, Busch said. The most pressing need was the rapid deterioration of the main beam carrying the entire Main Street façade, most notably the southeast corner of the building. That beam had deteriorated to a point where the corner was visibly shifting and in danger of collapsing. With help from the Preservation League of New York and a “Seven to Save” designation, ORG was able to secure funding to address that issue, stabilize the façade and prevent collapse temporarily.

“However, we were fully aware that there was an enormous amount of additional structural work that would be needed in the future,” Busch said. “This project had only scratched the surface.”

ORG had also begun developing concepts for adaptive reuse of the building in the hope a developer could be found. ORG is a 501(c)3 arts and cultural organization and did not have the resources to undertake a project of the magnitude required.

ORG arrived at the conclusion that what might be the best use for the venue would be an event center, with a restaurant, hotel space or office space. In seeking a potential developer, the obvious local choice was Hungerford.

“His love of the community and its history are well known, and such a person would have more than just a business interest in the Bent’s project,” Busch said. “It would be a labor of love for his hometown.”

A conversation was initiated with Hungerford and the sale of Bent’s Opera House came to fruition in 2016.

After buying the building, Hungerford discovered it was an engineering nightmare. A structural engineer said one section was within a decade of falling onto Main Street.

“However, our repurposing goals are making it into are a delight,” Hungerford said. “It would have been a shame to see it knocked down.”

Hungerford praised the talents of the builder, Patrick O’Grady. O’Grady resided in a sandstone home at Catherine and West Center streets, and within two blocks of that house, one of Hungerford’s new firms — Talis Historic Restoration — is restoring an 1865-built Medina sandstone mansion, as well as the old Medina High School, built in 1922. The sandstone mansion is to be a bed-and-breakfast guest house and the old school will contain higher-end loft apartments.

“O’Grady was an incredible builder,” Hungerford said. “I can’t account for how he got those huge beams at the Bent Opera House up three floors using horses and pulleys.”

Hungerford’s team selected Le Chase Construction to be the general contractor. Charlie Spencer of Clarendon was the project superintendent.

“This is the most challenging job of my career,” Spencer said in an interview at the beginning of restoration. “I’m honored to be involved in this project, but I wake up in the night thinking about it. This is a great community, and Roger and Heather Hungerford are great clients to work for.”

Restoration included reinforcing or replacing all the floor joists in the building. The entire roof structure, including all new steel beams, was replaced over a six-month period. Twenty to 30 men worked for months on the task, only stopping for a time in 2020 when Covid restrictions demanded it.

On the first floor of Bent’s, there is the new restaurant called Harvest. Chef Lionel Heydel was hired two years ago and has been planning the menus for the anticipated opening. A grand stairway leads to a boutique hotel with 10 themed rooms on the second floor. The third-floor opera house will be an event center for weddings, business meetings, musical events and lectures.

An elevator has been built and a dumbwaiter will accommodate catering needs to transport food and drink to the event space.

Harvest will utilize food, wine and produce from local farms and wineries, as much as possible. Staff have been in training for several weeks and members of the community have been invited to enjoy sample meals, in preparation for the grand opening next week.