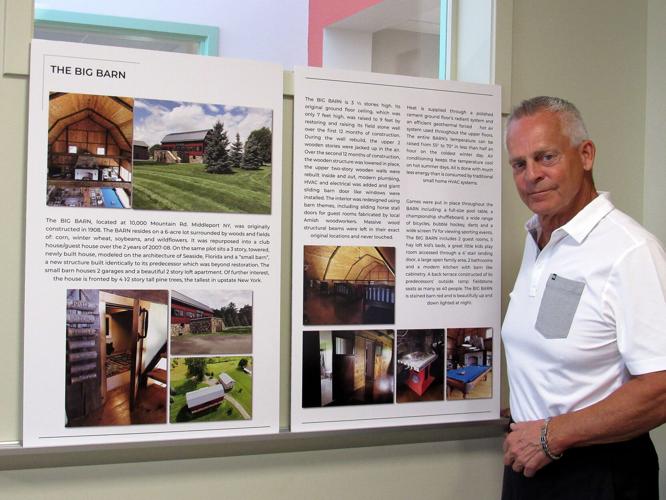 Bent’s Opera House in Medina now hosts a restaurant, upscale hotel and event venue. (Photo by Virginia Kropf) At right: Roger Hungerford with a display in the old Medina High School that details one of his historic restoration projects. One of his companies, Talis Historic Restoration, is converting the high school on Catherine Street to high-end loft apartments. 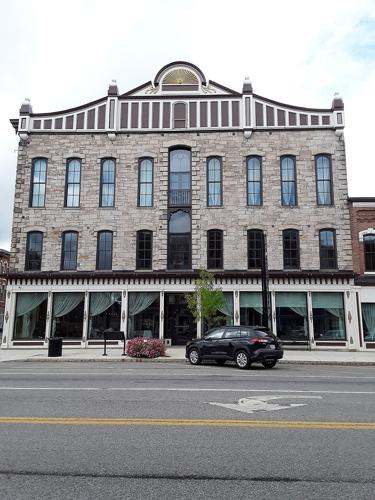 Bent’s Opera House in Medina now hosts a restaurant, upscale hotel and event venue. (Photo by Virginia Kropf) At right: Roger Hungerford with a display in the old Medina High School that details one of his historic restoration projects. One of his companies, Talis Historic Restoration, is converting the high school on Catherine Street to high-end loft apartments.

MEDINA — It has been little more than year since Roger and Heather Hungerford opened the doors at the restored Bent’s Opera House, a project more than three years in the making.

The building boasts an upscale restaurant staffed by world-class chef Lionel Heydel on the first floor, themed and professionally designed boutique hotel rooms on the second floor and the majestic opera house on the third floor.

The Hungerfords are beginning to promote the opera house as an event/entertainment venue. They’re encouraging the community to think of it when looking for a place for private or public events. Swing dance lessons and swing dancing are underway on the third Thursday every month. People can register for lessons online or just show up at the door; a 45-minute lesson starts at 6:30 p.m. and is followed by open dancing at 7:15.

Heather Hungerford, who is managing Bent’s, is aiming to have one or two major events in the opera house each month. The Easy Street Big Band played a concert there on Sept. 9. Planning is underway for a New Year’s Eve ball with a Great Gatsby theme. Packages including a hotel room and / or dinner will be offered.

At Harvest Restaurant, Wine Paired Dinner is featured on the last Sunday of the month. Each of seven courses is paired with a wine chosen by that evening’s featured sommelier. The next dinner on Sept. 25 will feature the head sommelier from Disney Cruise Lines.

Roger Hungerford purchased Bent’s from Orleans Renaissance Group, which had been given the building when Bank of America left Medina. Shortly after the purchase, an engineer’s inspection showed the ancient building is in danger of collapse due to deterioration of a main beam holding it up. Hungerford said previously that had he known what he was getting into, he might not have signed on for it, but since he did, he wouldn’t let a historic building in the center of his hometown fall to ruin. Restoration design began in 2016. The work cost millions and took 3-1/2 years, counting Covid-related shutdowns.

While Bent’s was being restored, Hungerford formed Talis Historic Restoration to to deal with two other properties he had acquired in the village: Medina High School on Catherine Street and the Luther mansion on West Center Street.

The old high school, renamed Mustang City, has a new roof and all restored and winterized windows. Design of high end loft apartments is in progress, according to Talis Historic Restoration’s Travis Farnsworth. The Luther mansion, now called Stonehurst, will be restored as a historically consistent single-family home, Hungerford said.

Hungerford, who is well-known in the medical industry, considers his primary focus to be the design of high-acuity electronic medical devices and software. In the Olde Pickle Factory, his industrial park, AMGIS (led by Jason Maine) is working on a revolutionary approach to intravenous fluid and drug delivery. This past December, Hungerford sold a company in that space, Talis Clinical of Cleveland, which is now owned by Getinge.

Hungerford’s involvement in the medical industry goes back to his father Van Hungerford, who worked at and later owned Sigmamotor. His father is credited with inventing the world’s first heart pump, and Roger’s contributions to the industry include inventing an intravenous delivery pump and a cardiopulmonary bypass pump and developing an advanced clinical guidance software tool that electronically connects and integrates all manner of patient data. This is used especially for patients who are on multiple units, such as seizure pumps, infusion pumps and cardiopulmonary pumps.

So, where to from here?

Says Hungerford: “I enjoy the learning, people and experiences associated with good work. Hopefully, my teams and I can produce one or two more things of value before we are done.”