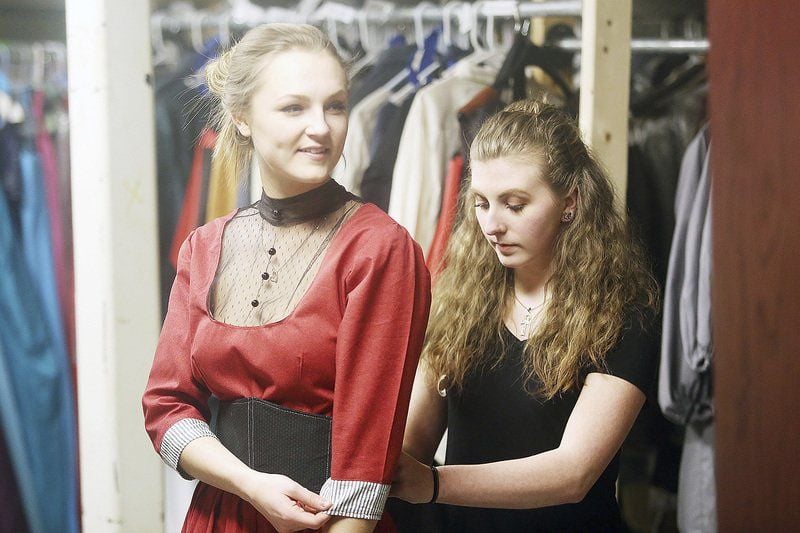 Jordan Stover, right, works on the costume that will be worn by Abbie Cole in the Lockport High School student presentation of "Oliver!" this weekend. Stover designed and made the costume for Cole, who portrays Nancy. 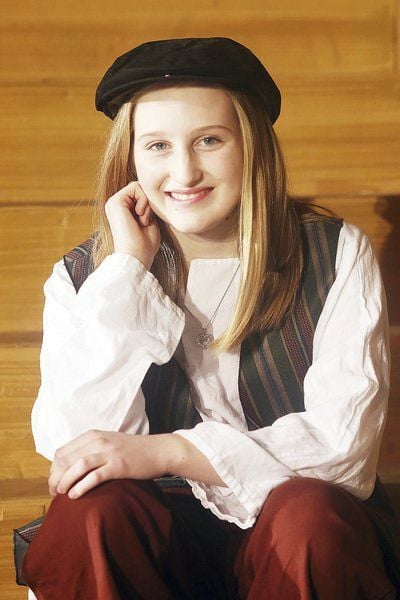 Junior MaryClaire Haseley has the title role in the Lockport High School production of Oliver! this weekend.

Jordan Stover, right, works on the costume that will be worn by Abbie Cole in the Lockport High School student presentation of "Oliver!" this weekend. Stover designed and made the costume for Cole, who portrays Nancy.

Junior MaryClaire Haseley has the title role in the Lockport High School production of Oliver! this weekend.

The musical will be presented at 7 p.m. Friday and Saturday at the school, 250 Lincoln Ave. A matinee performance is set for 2 p.m. Sunday.

“It’s a classic story,” D’Angelo said. “Every year we try to do something different. We want to give kids an opportunity to be in a lot of different shows and experience many different types of theater.”

"Oliver!" is an English musical, written by Lionel Bart and based on the classic novel “Oliver Twist” by Charles Dickens. It is also the first musical adaptation of a Dickens work to become a stage hit.

D'Angelo says that "Oliver!" is a timeless story.

“It’s about the horrible working conditions that existed in London in the 1800s. The workhouse owners use orphans and treat them very poorly. Dickens wrote during a very bleak and depressing time in London,” he said.

The musical features a number of memorable tunes, the most famous being “Consider Yourself.”

“All of the songs are unbelievably catchy. People will find themselves humming these songs for days after the show,” D’Angelo said.

Among 28 different school musicals being performed in Western New York this weekend, D’Angelo says he is surprised that so few high school theater groups perform "Oliver!"

“It’s not done in high school theater very often. It’s such an endearing story that you would think more high schools would perform it more often. We are the only one performing Oliver!,” he said.

Oliver! will give a large number of students a chance to shine on stage.

“It is a very large and diverse cast of characters. There are lots of fun and interesting parts in the show. A lot of students will have their moment to stand out,” D’Angelo said.

The Sowerberrys, the undertaker and his wife, are two of the more memorable roles.

“Mr. and Mrs. Sowerberry are wonderfully sinister, but with a lot of comedic appeal,” D'Angelo said.

Students Spencer Dick and Allyson Sawyer have those roles.

Students Haynden Diviak and Lucy Desjardins will portray Mr. Bumble and the Widow Corney, the owners of the Workhouse for Orphaned Children.

“They are cruel and nasty but in an endearing and humorous way,” D’Angelo said.

“Some people thought we would have to use an elementary school-aged boy to play Oliver Twist, but we have had women in boy roles before. We had one just last year," D'Angelo said. "I have no hesitation to ‘gender bend’ when we need to.”

D’Angelo chose Haseley after she auditioned for the role in January. LHS theater-goers may remember her as Cindy Lou Who in "Seussical" last year.

“She has a sweet, innocent countenance. She has a pure and light sound to her voice. There is an innocence about her that is appropriate for the role," D'Angelo said. "It does help that she is small.”

Haseley has been involved in musical productions since she was a fourth-grader at DeSales Catholic School. She was involved in productions of "Scrooge" at the Historic Palace Theatre for five years and was a featured soloist in two of them.

Of her latest role, Haseley said the most difficult part of learning it was speaking with an accent.

“It’s a Cockney accent. You have to learn to speak in a totally different way," she said. "It was very hard at first but it got easier the more we practiced.”

D’Angelo says one of the reasons he is so fond of high school theater is that it gives students a chance to excel in different areas, including roles that are not on stage.

“It’s educational theater. We need to help the kids learn something while they are working on each show,” he said.

Senior Jordan Stover will be working directly in an area that she plans to study in college: fashion design. For "Oliver!," she designed and created the costume that will be worn by the character Nancy (portrayed by Abbie Cole).

“I started working on Abbie’s costume at the end of January. I finished it March 1,” she said.

Stover has participated in all aspects of the spring musicals and the fall plays throughout her years in high school, and was the props manager for two years.

“I’ve worked in the sound booth. I’ve also worked the spotlight and been on stage," she said. "I was pretty excited to design and make a costume this year.”

Tickets for Oliver! are $10. Order them online at lhs.booktix.com or call 478-4600 and leave a message for the box office.