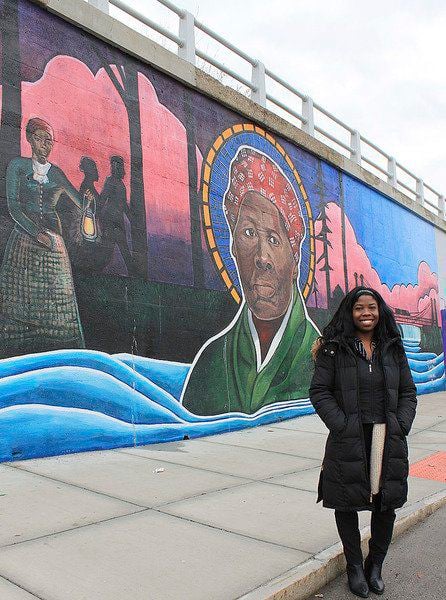 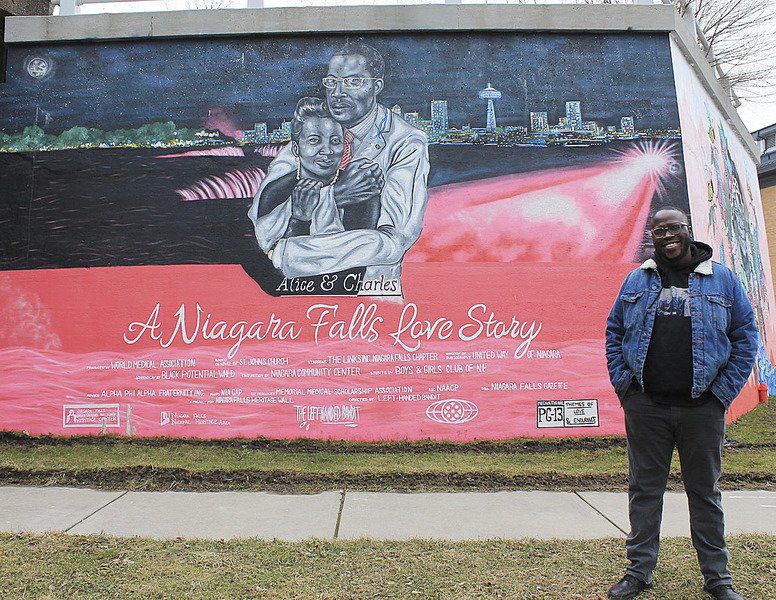 Christina Parker/contributorTyshaun Tyson is the artist behind the movie-style poster mural of Dr. Charles and Alice Hayes.

Christina Parker/contributorTyshaun Tyson is the artist behind the movie-style poster mural of Dr. Charles and Alice Hayes.

NIAGARA FALLS — “Life’s most persistent and urgent question is, “What are you doing for others?” Those words spoken by Dr Martin Luther King Jr. in 1957 are still being answered by many here today in Niagara Falls.

The purpose of this art initiative is to transform once dull public spaces into beautiful works of art that will foster a sense of pride in the Highland Avenue community. There is a lot of rich history in that area dating back to the pre-civil war era which the museum housed in the city’s train station delves into.

All of the artists who applied to paint a mural were asked to write a short piece about what freedom meant to them and then were assigned a space on the wall in which to create their paintings. The largest space on the wall belongs to Madonna Pannell who is the artist behind the Harriet Tubman mural and also a Niagara Falls native. Pannell says, “It was a great experience,” and she was glad to get to be a part of it.

“I am from the area and I want the residents to know that just because you come from a ‘bad area’ does not mean you are a bad person.”

Pannell said that the task of painting a mural was very physically demanding. This was her first large-scale piece of public art and it required her to stand for hours upon hours painting after having her sketch enlarged and projected onto the wall. She estimated about 50 total working hours of hand painting went into making the mural. Pannell reflected fondly of people passing by who stopped to get out of their cars just to speak to her as she was painting.

Tyshaun Tyson is the artist behind the movie-style poster mural of Dr. Charles and Alice Hayes. Tyson is a Buffalo resident and said he’s honored to have his work here.

Tyson who also worked to assist the Food Co-op on Highland Ave with their outside mural, now tells the story of Charles Hayes and his wife Alice. Hayes was Niagara Falls’ first African American physician and with the help of his wife helped to start or be founding members of many of the institutions that benefit this community and the city of Niagara Falls to this day. All of which he lists as credits in the bottom of his mural.

Tyson added that he was grateful to the community for all of the help and support they showed him. Tyson was running into some problems with materials and was assisted by a stranger who used to be a painter in the area and saw him working outside with the wrong type of paint. That stranger spoke to Tyson and “20 minutes later he showed up with several cans of the right kind of paint to use,” Tyson said.

The Niagara Falls National Heritage Area plans to have artists work on the other side of the wall adjacent to the current murals this upcoming summer as well as walking trail art further down past the bridge.

While most places will be closed in observance of Martin Luther King Jr. Day, the Niagara Falls Underground Railroad Heritage Center will be open for visitors to come and learn about all of the influential people who made a lasting impression in Niagara Falls in the name of freedom.