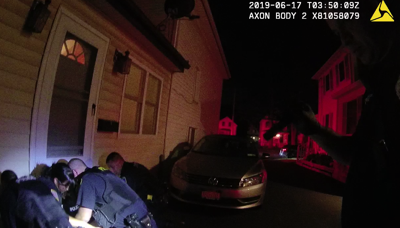 As multiple Lockport police officers attempted to restrain him while pinning him to the ground outside his mother's Park Avenue home, Lockport resident Troy Hodge repeatedly said "no" and also moaned, "Don't kill me."

The last words of Hodge — who died on June 17, 2019 following an interaction with city police officers who were called to his mother's house after she reported him acting erratically — can be heard on footage captured by the body camera worn by a Niagara County Sheriff's deputy who responded to the scene.

The body camera footage was released to the newspaper on Friday by attorneys representing Hodge's mother, Fatima Hodge, who has an ongoing lawsuit against the city and four of its officers. The newspaper has reviewed raw video which contains personal medical information and shows individuals who are not related to the case. The newspaper is anticipating the public release of a redacted video by the attorney general later this afternoon.

While portions of the video are obstructed, multiple officers can be seen kneeling around Hodge and holding him down with their hands in an attempt to restrain him. On one section of the video, a female officer can be seen with her knee on Hodge's head. Other officers are shown kneeling on Hodge's upper and lower body. Later in the video, the footage shows the leg of an officer who appears to be pressing down on Hodge's neck with his foot.

Joe Morath, an attorney with Connors LLP, the Buffalo firm representing Hodge's mother and family in their lawsuit against the city, said the timing on the video shows the officer had his foot on Hodge's neck for about 70 seconds.

Later in the video, while Hodge is face down with his hands cuffed behind his back, he appears to struggle, prompting one of the officers to tell him to relax his hands, saying: "We're trying to help you here. You are on some stuff that we've got to get you clean of."

Later in the video, Hodge appears to be unconscious, prompting one officer to say "Troy," while another asks: "Is he breathing?"

After determining that he is "out," multiple officers are heard saying "Troy" before turning him over and lifting him on to a stretcher.

At that point, a female emergency medical technician who arrived on the scene says: "Is he actually breathing" to which an officer responds, "Yeah, he was just breathing."

As she begins examining Hodge while he is on the stretcher, an EMT can be heard saying she can't feel a pulse. At that point, the EMTs ask the officers to take the cuffs off Hodge.

"He has no pulse, no nothing guys," the female EMT can be heard saying.

On multiple occasions on the deputy's body camera footage from the night of the police encounter, officers can be heard discussing the possibility that Hodge had taken drugs or was on drugs.

Fatima Hodge called Lockport police at 11:40 p.m. June 16, 2019, and reported that her son, Troy, was acting erratically. Officers arrived at her home at 217 Park Ave. where they said Hodge told an officer he was going to go into the house to get a gun. During the encounter with police, Troy Hodge suffered facial injuries and was Tased. After the encounter, he collapsed in medical distress. He was declared dead shortly after arriving at Eastern Niagara Hospital on June 17, 2019.

Thomas Burton, the attorney representing three of the four involved officers, has said that he does not believe any of the officers will be charged following an ongoing attorney general’s investigation of the incident. Burton has also previously indicated that there are no statutory, penal law or departmental policy violations to be found in the officers’ response that night.

Thomas Burton, an attorney representing three of the four officers singled out in the lawsuit, said the release of the video will not be effective in hurting his clients' case.

'Not when its put in context of what happened," Burton said. "It is a tiny snippet that does not show the acute cocaine intoxication and, additionally, no (medical examiner) has found police conduct did anything to asphyxiate Mr. Hodge. Everything shows this was an excited delirium outcome with someone with an overdose of cocaine."

Excited delirium, also known as agitated delirium, is described as a combination of psychomotor agitation, delirium and sweating, which may include attempts at violence and unexpected strength. Its causes include drugs and mental illness.

A year of 'hell' for a survivor

Morath says the video reinforces the family's contention that the responding officers were negligent and demonstrated "inappropriate" conduct in their handling of the encounter. He argues that Hodge was "clearly not a threat" while he was laying on the ground and suggested that the officers actions contributed to Hodge's death.

“Even if I stood up and said, 'You know what, Lockport Police Department, I will agree with all of that. You did everything right, until he was on the ground with handcuffs.' How would they answer? … Why did you do this? Why is there an officer with his foot on the guy’s neck for 70 seconds? What’s the answer to that?" Morath said.

He also contends that the four Lockport officers who are named in the lawsuit violated departmental policy by not turning on their body cameras. As a result, he said, there is no video of what transpired when officers first arrived on the scene.

“We would love to know with certainty what happened from the moment the police arrived to what was clearly a medical call,” Morath said.

In the wake of Troy Hodge's death early June 17, many residents have asked how a call report…

Morath said he anticipates defense attorneys in the lawsuit will attempt to call Hodge's conduct prior to his death into question, while asserting that the officers did what they needed to do to subdue a person who was possibly on drugs and acting erratically. Morath described that defense as "a red herring," considering the outcome of the police encounter.

"That’s what they want us to talk about. They want it to be about what Troy did up until the point he was on the ground," Morath said. "Number one, we’ll never have a clear answer on that, and number two, in the grand scheme of things, it doesn’t matter. The clear negligence here, the clear inappropriate police conduct when Troy was on the ground – not a threat to anyone. …There’s no justification, whatsoever, under any scenario for that.”

Morath said the family's lawsuit is not about money but rather an effort to promote change for the better within the City of Lockport Police Department.

“She does not want this to happen again," Morath said, referring to Hodge's mother. "She wants changes to training, how officers respond to calls of mental health or welfare checks as opposed to criminal complaints, more involvement of mental health professionals responding to these calls. Officers who know how to handle somebody if they are high on drugs and if they are having a mental episode, but they’re not threatening anyone or harming anybody. You don’t treat that the same way as someone threatening to hurt someone.”

The office of New York State Attorney General Letitia James has an open investigation into the police department's handling of the Hodge incident.

Lockport Mayor Michelle Roman said on Friday that she has seen the video, which she described as "very disturbing." She said she is reserving additional comment on the matter until the attorney general's investigation has been completed.

“I wish the investigation was over to get some closure for the family and the whole community," Roman said.

One evening every week, friends and family of Troy Hodge rally outside city hall to demand a…

To many residents, the death of Troy Hodge, an African American resident, in an encounter wi…

As concerned residents try to make sense of how a man died in a scuffle with city police, th…

The New York Attorney General has announced it will investigate the death of Troy Hodge, a L…

Residents are demanding answers about police practices and transparency, after Troy Hodge di…

The mother of Troy A. Hodge has claimed police overuse of a Taser killed her son, while poli…

A Lockport man, Troy Hodge, died in police custody early this morning after a fight with police.