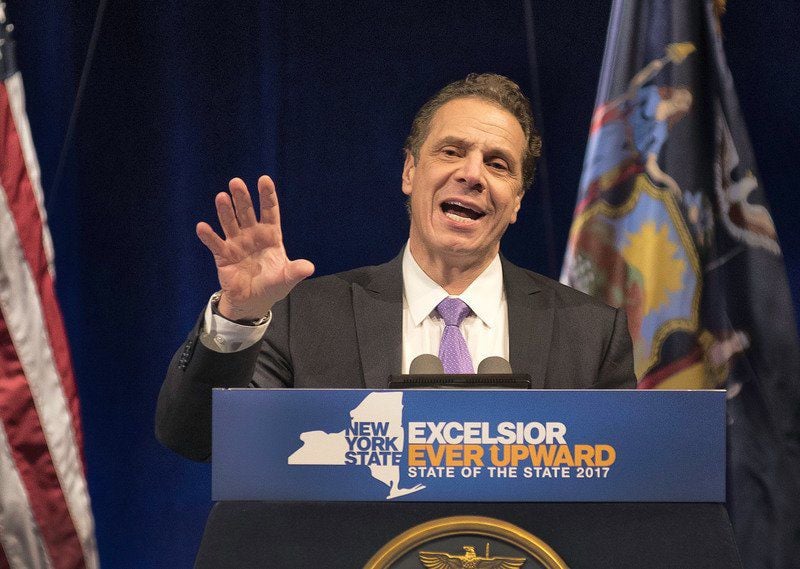 Gov. Andrew Cuomo delivers one of his State of the State addresses at the UB Center for the Arts on Monday. 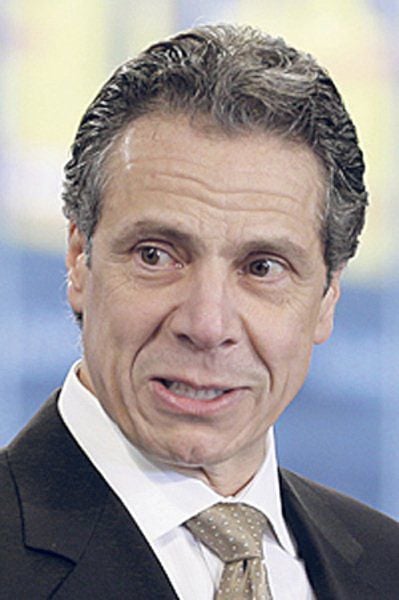 Gov. Andrew Cuomo delivers one of his State of the State addresses at the UB Center for the Arts on Monday.

ALBANY – Making it clear that he accepts no blame for high property taxes, Gov. Andrew Cuomo is putting the onus on local leaders to cut the burden on landowners by sharing services and pruning bureaucracy.

It was a major theme of his string of State of the State speeches, which included his own prediction of backlash, as well as his assertion that New York's high taxes are not his creation.

"The opposition to this is going to be fierce because it's going to be the entire political class that is going to oppose it," the Democrat governor told an audience at the State University at Purchase, in Westchester County, not far from the home he shares with his partner, television star Sandra Lee, with annual property taxes of more than $30,000.

Cuomo wants local and county leaders to meet, hold hearings and devise cost-cutting plans to be vetted by county legislative bodies before going to voters via ballot referendum.

That idea is being panned by leaders of some of the governments it would squeeze, as well as lawmakers who say Cuomo is simply making others into scapegoats for New York's high taxes.

"This is a bogus accusation by the governor," Assembly Republican Leader Brian Kolb, R-Canandaigua, said in interview. Cuomo is trying to "misinform" the public, he said, by maintaining the state has too much local government.

Kolb and the state Association of Counties say Cuomo passed up a chance to relieve counties of their burden by having the state pay the growing cost of legal aid for the poor. Cuomo vetoed a proposal for the state to assume the expense, despite unanimous support in the Legislature.

Because his veto came in late December, when lawmakers were not in Albany, there was no opportunity for an override. Many lawmakers now insist that Cuomo address the issue in his next budget.

The requirement that counties pay for legal aid is one of nine state mandates that account for about 99 percent of property taxes, according to New York State Association of Counties.

"We need to have the state pay for the services it mandates and stop trying to push it downhill onto the backs of property taxpayers," said William Cherry, president of the association and the Schoharie County treasurer.

The largest tab of all mandates on counties if for Medicaid. Nearly half of a $4.8 billion property tax levy for the counties outside New York City in 2015 went to Medicaid expenses, according to the county association. Expenses for legal services for the poor came to $165 million.

Opposition to Cuomo's plan is not just coming from local leaders. Ronald Deutsch, director of the union-backed Fiscal Policy Institute accused Cuomo of being "disingenuous" by suggesting that local governments hold the keys to solving the state's tax problems.

Deutsch said the state could come up with money to pay for services now borne by counties by keeping and expanding a surcharge on high earners' incomes -- the so-called millionaires' tax, set to expire at year's end. It could revise or end tax rebates mailed to property owners before the elections, or slice out $9 billion in economic development funding controlled by Cuomo.

But Cuomo's team says those looking to reduce the mandates on counties are perpetrating a "shell game." Spokesman Rich Azzopardi called it "shifting costs, which will have to be borne by the same taxpayers in the form of state income taxes."

He credited Cuomo with saving counties $1.9 billion since 2013 by eliminating growth in the local share of Medicaid costs. "No governor has done more to deliver mandate relief than Governor Cuomo," he said.

One of newest legislators, Assemblyman Billy Jones, D-Franklin County, said local governments in the North Country are already lean after aggressively looking to share services and wipe out duplication.

Jones, former chairman of the Franklin County Legislature, said the local governments are "about as efficient as they can be."

He said he is still awaiting more details on Cuomo's proposal.

Both he and another Albany freshman, Assemblyman Mike Norris, R-Lockport, said nudging the state to assume the costs of providing lawyers to poor people should be a major focus of lawmakers.

Norris said he has no doubt that state mandates are driving up property taxes. "The governor and I agree on one thing: Property taxes in New York state are too high and are burdensome on small business owners and local citizenry just trying to make ends meet," he said.

Even if Cuomo is picking a fight he cannot win, he seems to be succeeding in casting himself as a fighter against government inefficiency, said Doug Muzzio, political science professor at Baruch College in Brooklyn and a resident of upstate Delaware County.

"He is showing that he has ideas to fight the tax burden," said Muzzio, adding that Cuomo appears to be positioning himself to run for a third term in 2018 and perhaps could be "setting the table" for greater ambitions, such as a White House run in 2020.

Joe Mahoney covers the New York Statehouse for CNHI's newspapers and websites. Reach him at jmahoney@cnhi.com.

Donna M. Hammond passed away October 19, 2021 in Eastern Niagara Hospital. Born August 16, 1957 in North Tonawanda, she was the daughter of Kenneth and Florence (Baer) Amacher. Donna was a member of The Chapel Lockport Campus and volunteered with the Niagara County Mental Health Association.…

Ian S. Churchill, of Lockport, NY, entered into rest on October 21, 2021. He is survived by his beloved wife, Stephanie (Douglas). He is also survived by his parents, Patrick and Mary Churchill; in addition to his brothers, Brett (Mollie) and Blaine; plus five nieces and nephews. He will be …