Beth Cooke prepares to share breakfast with a visitor at her Cooke's Creekview Bed and Breakfast in Newfane. 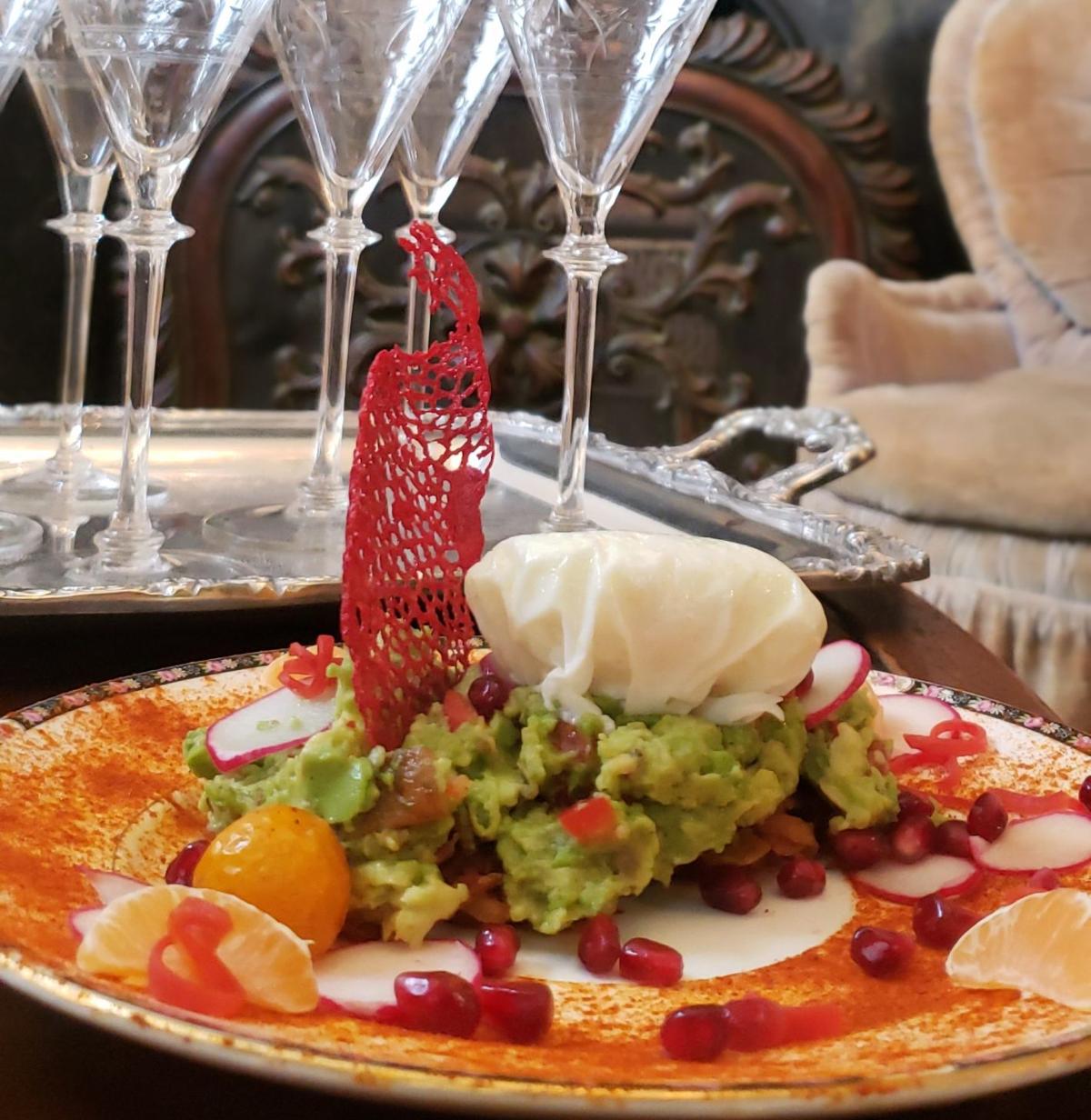 A breakfast at the Aaron House in Niagara Falls may include poached egg with smashed avocado, on potato rosti with coral tuile garnish and persimmon seeds.

Beth Cooke prepares to share breakfast with a visitor at her Cooke's Creekview Bed and Breakfast in Newfane.

A breakfast at the Aaron House in Niagara Falls may include poached egg with smashed avocado, on potato rosti with coral tuile garnish and persimmon seeds.

Breakfast lovers may find it hard to understand people who grab and go in the morning.

Despite the clock, those who adore a morning repast can more easily be lured to sit a spell when presented with a table set with good china, and freshly baked dishes and sweets.

Two area bed and breakfast owners who understand the delight some find in a morning feast, recently agreed to share some of their favorite breakfast recipes often enjoyed by their guests.

First up, Cooke’s Creekview Bed and Breakfast in Newfane where owners Beth and James Cooke welcome guests from around the world to their property at 2244 Lockport-Olcott Road, overlooking 18 Mile Creek.

Beth and her husband share cooking duties, but she is quick to say the Cinnamon Bread Bananas Foster is his specialty.

Recently, sharing breakfast with a guest, she talked about the evolution of one of her barns into a beautifully renovated three-bedroom home, adjacent to her gardens, the creek, and right on the Niagara Wine Trail.

The Cookes, grandparents to nine, who raised their three sons in North Tonawanda, both still work full-time. James, a former Air Force flight medic, works at the Niagara Falls Air Reserve Station as a civilian bio-technician. Beth works as a researcher at the Veterans Administration Medical Center in Buffalo, a job she’s held for 40 years.

Fifteen years ago, the couple was looking for a house with an in-law apartment for Beth’s mom, when the Newfane property popped up in their search.

It was in pretty sad shape, but they got a good deal for four acres, the house and two barns — one of which was built circa 1898, the other which they started renovating five years ago, turning it into the centerpiece of Cooke’s Creekview Bed and Breakfast two years ago.

Though it’s a lot of work to host guests from around the world, the couple have enjoyed sharing their beautiful property.

“It’s like being on vacation, with the woods, the trails and the docks,” Beth said, adding “the view is spectacular.”

At one point, she stopped mid-sentence and pointed to the window. “Look, a hummingbird,” she said pointing to a tiny winged creature enjoying her English-style garden.

The Cookes enjoy delighting their guests with a sumptuous breakfast.

“We basically have three or four things we do all the time,” Beth explained. “My husband does the French Toast Bananas Foster. It’s cinnamon bread, cut up and soaked in a mixture of eggs overnight, baked and served with bananas over it. It’s really, really good.”

The eggs come from the nearby hen house. The couple also serves fruit and Greek yogurt decorated with a sprig of lemon balm from the garden along with home-baked desserts.

Below are two of Cooke’s Creekview Bed and Breakfast’s most popular recipes.

Spray bottom of 13x9-inch baking dish with cooking spray. Add the bread cubes to the baking dish. In a large bowl, beat eggs, milk and 1/2 cup of the maple syrup with wire whisk.

Pour over bread in baking dish. Cover and refrigerate 8 hours or overnight. In the morning, heat oven to 350 degrees Fahrenheit.  Uncover the dish and bake 30-to-35 minutes or until golden brown along edges. Let stand seven to 10 minutes before serving. Meanwhile, in a medium microwavable bowl, microwave remaining two cups maple syrup uncovered on high for one to two minutes, stirring every 30 seconds until warm.  Stir in rum extract.

To serve, cut the baked bread into eight squares and place on individual serving plates. Sprinkle five to six banana slices and one tablespoon pecans evenly over each piece; drizzle with one cup of the warmed syrup mixture. Serve immediately; use additional syrup as needed.

will use less egg yolks than egg whites)

Preheat the oven to 400 degrees Fahrenheit. Butter the inside of five medium-sized ramekins. Melt the butter in a small frying pan over low heat. With a wooden spoon, stir in the flour, stirring constantly for two minutes. Take the pan off the heat, whisk in the scalded, hot milk, nutmeg, cayenne, a half-teaspoon salt and a quarter teaspoon black pepper. Cook over low heat, whisking constantly for one minute, until smooth and thick.

Take off the heat, but while still hot, stir in the cheddar and  Parmesan cheeses until the cheeses are melted; then add the spinach. Transfer to a large mixing bowl and add in the egg yolks.

Turn the oven temperature down to 375 degrees Fahrenheit. Bake for 15-20 minutes until puffed and brown. Serve immediately while the souffles are puffed.

Meanwhile, over at the Aaron House, at 411 Ferry Ave., just a short walk to the waterfalls, the guest books showcase the words of gratitude of visitors from all over the world.

The owners,  Katherine and Joe Cardosi, call the Aaron House a “living museum,” and though city records depict the house as being built in 1915, they have found experts who believe it is a Civil War era house, due to some of the rusted hooks and fixtures found in the two-story house which now decorate the house as 3-dimensional framed art, along with framed pieces of the original wallpapers.

They have also written a book for their guests called “The Fascinating and Unique History of Niagara Falls and a Civil War House,” detailing the history of their house and the city.

The Aaron House was abandoned when Katherine and her husband purchased it. They say it was built without a fireplace because it had “modern” central heat as early as 1869, which indicated prosperous owners.

Back then, “when you walked into a house like this, you knew they were up and coming,” Katherine said.

A tour through the house reveals quirky renovations, like a moveable bookcase that hides a secret passage to the kitchen.

The quirky house, carefully renovated to showcase the house’s history, includes a master suite and other bedrooms and a hallway papered with newspapers from the era.

“We photocopied them so everyone could sit and have a read,” Katherine said of the pages.

The couple also recently purchased the house next door and hope to continue their efforts to showcase living history in the city.

She said every time they have Millennials as guests, they marvel at the history of the house and the low-price real estate in the neighborhood.  “I say to them, stay. I will buy you a house,” she said with a laugh.

She shares the recipe for her breakfast poached egg breakfast dish, served with smashed avocado on potato rosti with coral tulip garnish and persimmon seeds, served to guests who request the special dish, for a cost of $15.

Katherine calls this dish an easy “Wow!” breakfast and says most of the dish can be made the day before.

Place cling wrap over the non-stick small bowl or cup and spray lightly with oil.

Crack an egg into the cling wrap, then gather the edges together. Be sure to force all air out and twist the cling wrap together ( I tie a loose knot). I put these little bags carefully back in egg container until I need them a little later.

Place eggs into the in center of pan of boiling water. Cook for about three minutes. When preferred doneness is reached, remove with tongs or ladle and carefully place on a spare plate. cut the top of the cling film off, and remove, slipping the poached egg out. Egg should look very soft but formed.

While poaching the egg, plate up the rosti and put a dollop of smashed avocado on top. Then put a dent in the centre for the egg to sit in. Garnish plate with a sprinkle of persimmon seeds, Madeline segments, radish slices and the curled capsicum. Carefully place the tuile using the avocado to hold it upright. Serve the poached egg on the avocado. Sprinkle with paprika.

Squeeze potatoes in a tea towel to remove as much moisture as possible.

Place in a bowl and season to taste. Melt one tablespoon butter in a bowl. Mix together.

Cook over low heat for about five minutes, turning regularly.

When cooked place on kitchen paper on a baking tray and place in oven on the lowest warming temperature if serving shortly. These can be cooked the day before and stored in air-tight container with paper towels between each rosti. Warm in oven for 10 minutes at 300 degrees Fahrenheit.

salt and pepper to taste

Melt butter on low heat in small fry pan. Add garlic slices and fry till crisp and then drain the garlic on paper towels.Cut avocado in half and place in a mixing bowl. Smash roughly with a fork. Add all ingredients (except radish rings) and mix gently. Cover with cling film gently. Expel all the air. Save until ready to use.

Either oven bake the little tomatoes in an oven 350 Fahrenheit for 20 minutes, or fry in two tablespoons of butter on low heat till warmed through and browning. Set aside in oven with potato rostis.

Whisk flour, oil and water together and add a few drops of a favorite food coloring (I chose red for this recipe).

Then pour desired amount into hot non-stick fry pan. Turn heat down as the oil separates out and the flour mix cooks. Carefully lift out with spatula onto kitchen paper towel.

Sir mixture before each new batch is put in pan. Clean fry pan after each tuile is cooked. Store in airtight container with paper towel between.

Cut one side of a red pepper. Place flat on a chopping board with the shiny outside skin up and the flesh on the board. With a long flexible knife, slice carefully horizontally, to remove the excess flesh. Then slice the pepper very finely. Put into a glass of chilled water with ice cubes in fridge for later. They will curl over night.

To assemble the dish, sprinkle the plate with paprika, place rosti next to a thick dollop of smashed avocado, leveled to hold the eggs. Gently arrange the tuile standing in the avocado mash and slide the eggs onto the mash.  Garnish with mandarin orange slices, red peppers and persimmon seeds.