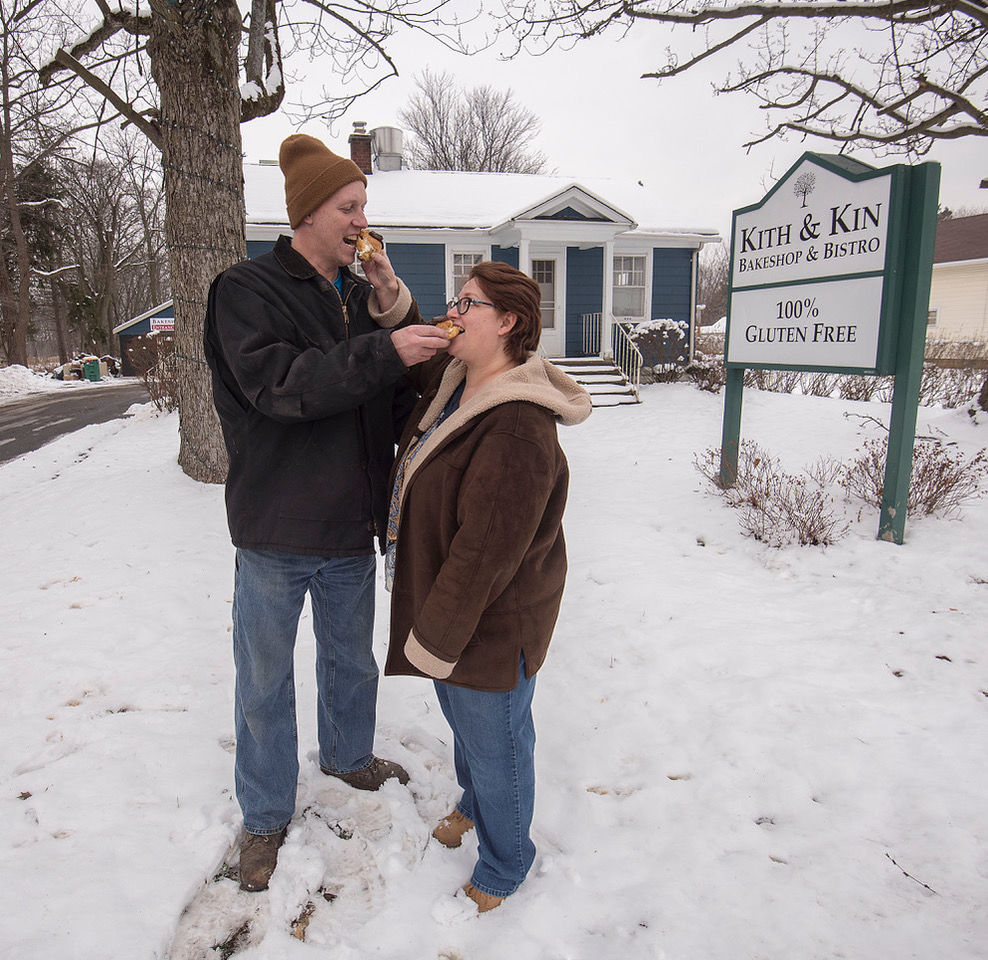 Lisa and Tim Jermyn, owners of Kith & Kin Bakeshop & Bistro, which recently opened at a new location on Transit Road in Lockport, share a bite from their gluten free menu. 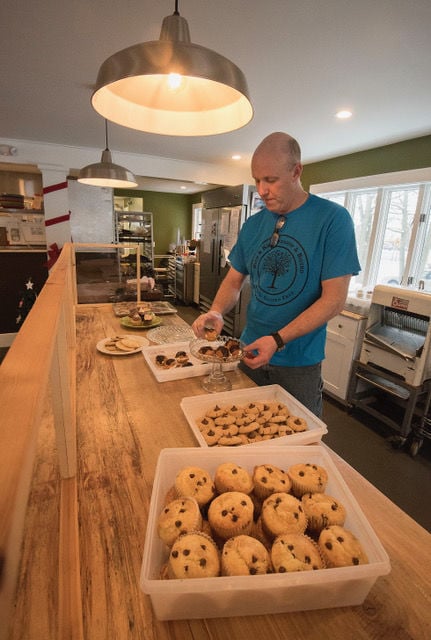 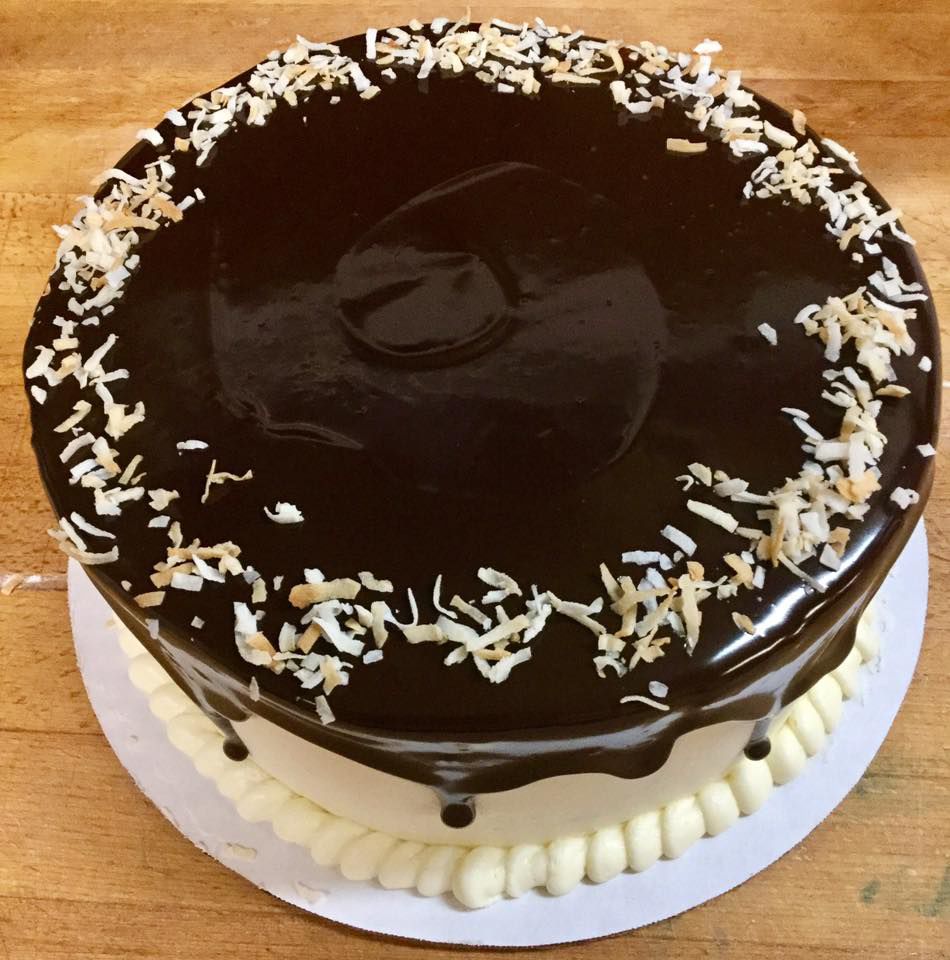 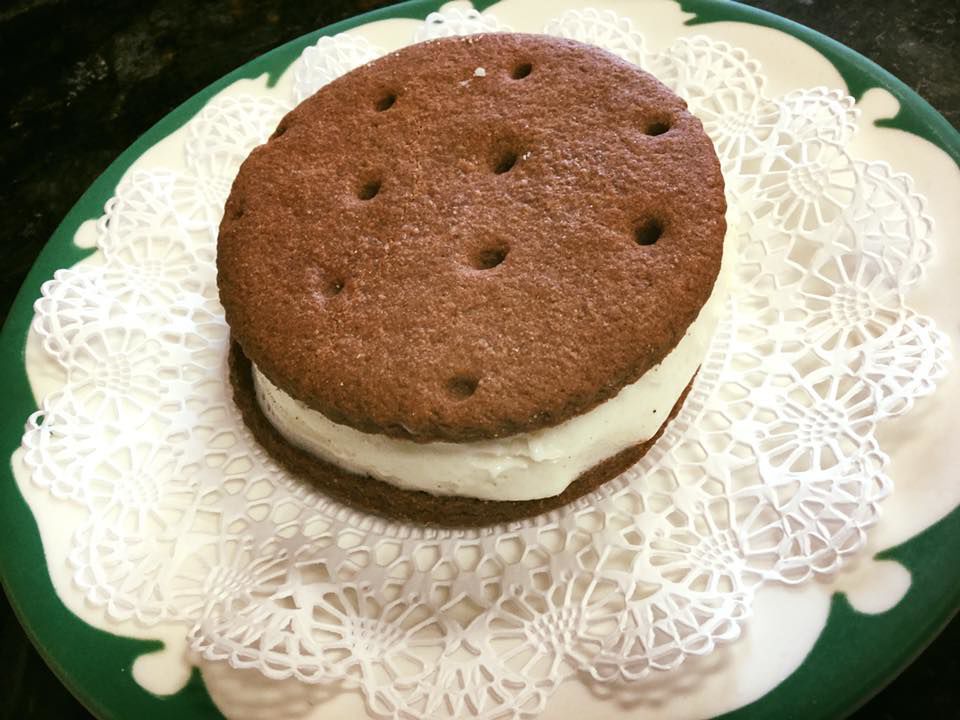 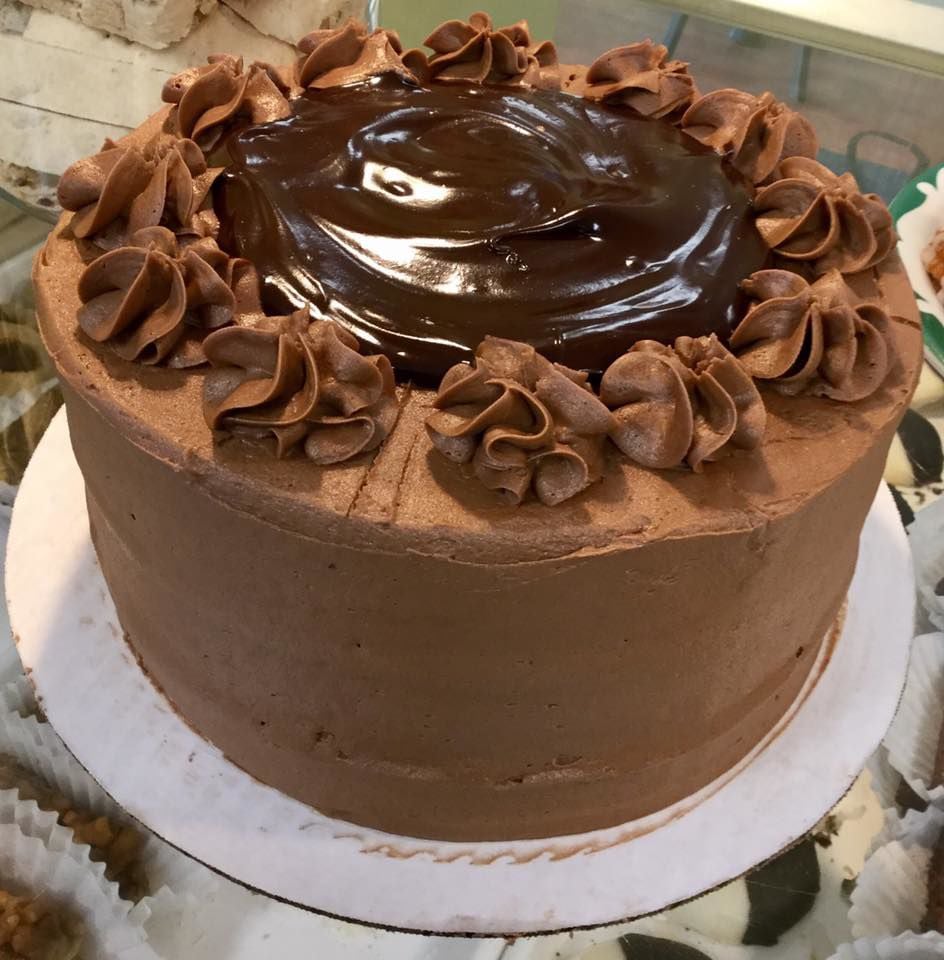 A triple-chocolate gluten-free cake from the bakery at Kith & Kin.

Lisa and Tim Jermyn, owners of Kith & Kin Bakeshop & Bistro, which recently opened at a new location on Transit Road in Lockport, share a bite from their gluten free menu.

A triple-chocolate gluten-free cake from the bakery at Kith & Kin.

Pies, cakes, mozzarella sticks and even a Friday night fish fry are just some of the foods most people enjoy on a regular basis without worry. But for many individuals who are gluten intolerant, these beloved foods are not an option, especially when wanting to enjoy a dinner out at a restaurant.

But in Lockport, one local couple has been working to change that since first opening in 2012. Kith and Kin Bakeshop and Bistro, now located at 5850 S. Transit Road, is operated by Tim and Lisa Jermyn. Tim is the chef for the bistro portion of the business and Lisa handles the bakeshop.

After learning that their three children have Celiac disease and would get very sick if they ate foods that contain gluten, a protein found in most grains, the couple found it necessary to cook and bake more at home.

“We’re big people, so we eat a lot,” Tim said. “It was really expensive to buy gluten-free food, as well as the baked goods. So my wife started baking things at home.”

That was when Lisa realized her love for baking gluten-free items, and wanted to share that joy with others.

The business began by selling whole sale items on West Avenue in Lockport. Shortly after, the bakery component was added, where Lisa would bake cakes and other items for special occasions. Then after relocating to its Dysinger Road location, a café portion was added. Recently, the Jermyns purchased a former doctor’s office, remodeling the property and converting it into a space where the bistro can continue grow and the bakery operation can also take place in the converted garage behind the building.

Opening the new location in late September, an expanded menu is now available. Kith and Kin now serves everything from appetizers, to breakfast items, to weekly specials and desserts.

Tim refers to their menu options as “brunch and brinner.”

“Before we had bakery hours,” he said. “We were a bakery that happened to have a café, too. Now we’re open restaurant type hours … because we have people that come from all over the area and it gives them time to stop here after work. We have appetizers and mozzarella sticks. We do fried pickles. Just being able to do that for people. That’s what I’ve trained for over the last 33 years as a chef.”

Some customers who stop into Kith and Kin also do their grocery shopping there. They will buy loaves of bread, items to bake later such as pre-made pizza, pie crusts and more. A variety of bakery items are also for sale, such as cookies, muffins and pastries. They also sell local Steamworks Coffee.

“We like to do almost everything here from scratch,” Tim said. “I make my own stock. We make our own pastry cream and chocolate ganache. That is just how I was taught, how I like to cook and how I like to eat. It also helps keep our food costs down and helps us know what goes in our food so we know it’s 100 percent gluten-free.”

When it comes to choosing what goes on a fully gluten-free menu, Tim said it is a bit of “trial and error.” He said on the restaurant side of things, it’s easier to create.

“Most of the time with cooking, it’s just thickening agents,” he said. “I can’t use wheat flour in a recipe, so I have to use corn starch or rice flour.”

For Lisa and the baking side of things, however, it can be more of a laboratory and less of a kitchen.

“It’s really magical to watch what they do when they try a new recipe out,” Tim said. “There is so much tweaking. They’ll make it and if it doesn’t come out, they have to decide what do they have to tweak to make it work. Sometimes recipes that are made for baking at home don’t translate when your’re baking 20 loaves.”

The couple have a joke where Lisa wants to buy the kitchen staff all chef coats, and for her and the bakery staff, lab coats.

Following two name changes early on in the business, the couple decided on Kith and Kin, meaning friends and family in old English.

Their three children, who have all worked at the bakery/bistro at some point, represent the family portion; and the customers are the friends.

As food allergies and food intolerances continue to grow throughout this country, there is a greater demand for products tailored to meet special dietary requirements. Kith and Kin is the only fully gluten-free restaurant in Niagara County, and is one of only a couple across all of Western New York. Because of this, the Jermyns have gotten the opportunity to interact with people from all across this area, the country and even the world.

Since opening they have heard countless stories from customers on how eating their cooking or having a baked good has impacted their life.

Tim said they get people who break down in tears because they are getting to try foods they have never tried before or foods they haven’t had in years.

“We had one lady who still comes in to see us. About 2014, after we first opened the café, she came in and had the fish fry,” Tim said. “She hadn’t had one since 1995. It’s just touching to be able to do that for folks.”

Then there are the twenty-somethings who come in. He said a guy who got diagnosed with Celiac disease when he was three had never had pie before. They got to change that. Another young woman drove down from Pittsburgh. She had never had a mozzarella stick because she was also diagnosed early in her life.

Those following a gluten-free diet are not the only customers who stop in to Kith and Kin on a regular basis, and this has increased with the move to Transit Road, which has made the restaurant more visible.

“A lot of times we get parties in that one person is gluten free and the rest come in not expecting too much. But then realize they like the food and they come back,” Tim said. “That’s a really nice compliment. There is nothing worse than someone saying it’s good for a gluten-free place. We just like to make food that is really good that just happens to be gluten-free.”

Patricia Quirk of Lockport has been enjoying the food at Kith and Kin for years.

“The food is awesome, and I’m not gluten-intolerant,” she said. “I especially like their quiche, muffins and soups. Their new location is cozy, warm and welcoming”

Kith and Kin is opened 10 a.m. to 8 p.m. Tuesday through Saturday. For more information visit www.kkbakeshop.com.