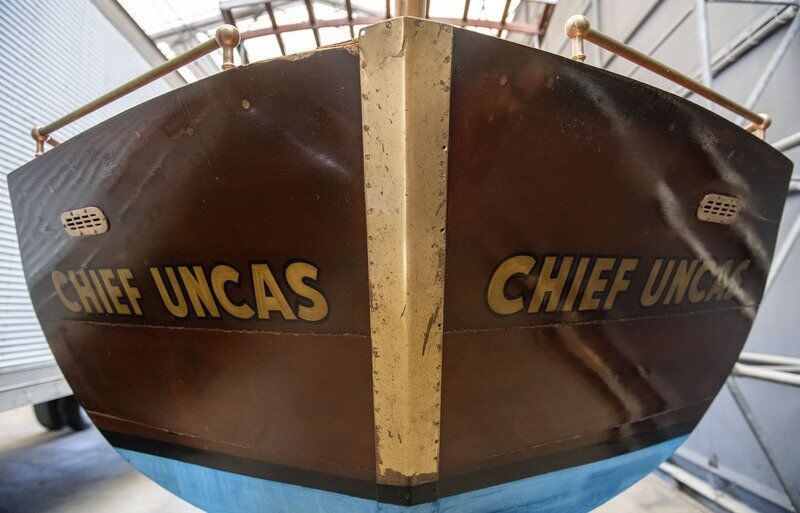 The transom of the Chief Uncas, a 109-year-old electric boat that was owned by Adolphous Busch, the co-founder of Anheuser-Busch, Friday, Oct. 22, 2021. The Chief Uncas was bought by the Susquehanna National Heritage Area with hopes of giving tours aboard the ship on the Susquehanna River next summer. (Ty Lohr/LNP/LancasterOnline via AP) 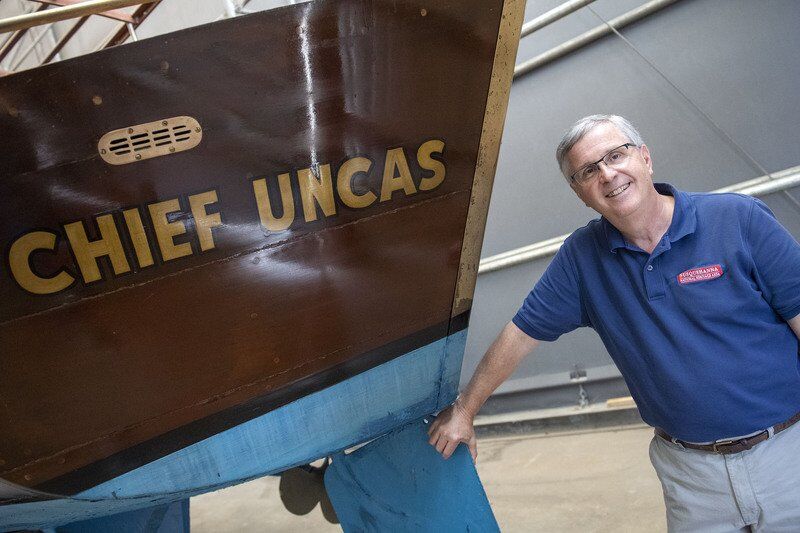 Susquehanna National Heritage Area President Mark Platts poses for a photo next to the transom of the Chief Uncas. (Ty Lohr/LNP/LancasterOnline via AP)

The transom of the Chief Uncas, a 109-year-old electric boat that was owned by Adolphous Busch, the co-founder of Anheuser-Busch, Friday, Oct. 22, 2021. The Chief Uncas was bought by the Susquehanna National Heritage Area with hopes of giving tours aboard the ship on the Susquehanna River next summer. (Ty Lohr/LNP/LancasterOnline via AP)

Susquehanna National Heritage Area President Mark Platts poses for a photo next to the transom of the Chief Uncas. (Ty Lohr/LNP/LancasterOnline via AP)

LANCASTER, Pa. — For more than a century, the Chief Uncas has been plying through the waters of the Susquehanna River, albeit 300-some miles north of Lancaster County.

The Chief Uncas, a 55-foot mahogany electric boat built in 1912, was the pleasure craft owned by Anheuser-Busch co-founder Adolphus Busch. It was used by his family at their summer estate on Otsego Lake near Cooperstown, New York.

In October, the Chief Uncas made its way to Lancaster County, its new home — at least when it’s in the water.

The boat was purchased by the Susquehanna National Heritage Area and will be open for tours on the Susquehanna beginning in 2022. The organization has been giving free pontoon boat tours as part of their River Discovery Tours, which take passengers around Lake Clarke on a variety of themed tours that usually last around an hour or so.

Despite the Susquehanna River’s 444 miles of running water, there’s only two other touring boats on the river – The Pride of the Susquehanna, in Harrisburg, and the Hiawatha Paddlewheel Riverboat, in Williamsport.

The boat was designed and built by the Electric Launch Company, later named Elco, in Bayonne, New Jersey. It was delivered to Busch on July 15, 1912.

The boat was converted to a gas engine in the 1950s before being restored back to electric in 2012. It runs on 16 batteries, weighing approximately 160 pounds each, that power two propellers under the back of the boat.

Platts said he fell in love with the boat when he was riding on it at Otsego Lake, shortly after the heritage organization learned about it.

The boat was owned by a fourth-generation descendant of Adolphus Busch, Lou Hager. And once Hager learned what the intentions were for the boat’s future, he was onboard to sell the boat.

Tours will be given on the boat, varying in topics all related to the river, such as a nature tour, historical tour or Lake Clarke, or an informational tour on bird species on the Susquehanna.

The start-up cost for the Chief Uncas project, which includes buying the boat, totaled about $190,000, Platts said. This includes money to restore the boat, fix problems and getting the project started.

The boat’s purchase cost was less than half of that price, Platts said.

Donations from Ann. B. Barshinger, of Lancaster, and Doug Hoke and George and Bambi Long, of York, helped fund the project, along with national grant funding by the National Parks Service and other state agencies.

All aboard that’s going ashore

Getting Chief Uncas from Cooperstown, New York, to Lancaster proved to be a challenge.

Platts said the process was a meticulously planned endeavor. The drive usually takes about four and a half hours -- hauling the oversized boat and cradle, which in total weighed nearly 17,000 pounds (or 8.5 tons), doubled the travel time.

Now that the boat’s back in Lancaster County, just miles from where it will launch in 2022, more business needs to be handled.

Since Chief Uncas will be carrying passengers, Platts said the boat has to be approved by the Coast Guard and it must be captained by a Coast Guard-approved captain. Some other safety measures have to be updated, too.

“We’re just so excited to be offering this to our local community… and have a really neat experience on our part of the Susquehanna,” Platts said.

Where does the boat’s name come from?

The mahogany-planked boat currently with the title of Chief Uncas is actually the second Chief Uncas. The first one was only 54-foot long and was gas powered, according to an achieved story from the Freeman’s Journal, a newspaper in Cooperstown.

The name for the boat derived from a character in James Fenimore Cooper’s novel, “The Last of the Mohicans.” Despite Uncas being a historically factual group of 17th-century Native Americans, mostly occupying what is now Connectcut, the boat was named for the fictional Uncas, according to the Susquehanna National Heritage Area. The organization says that this reflects the “common appropriation and romanticizing of Indian culture and leaders in early 20th century America.”