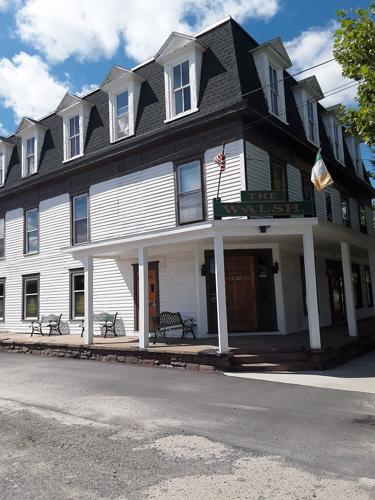 The Walsh Hotel at 525 West Ave., Medina, built in 1852, is open for business by new owner Tim Cooper, after a three-year renovation effort. 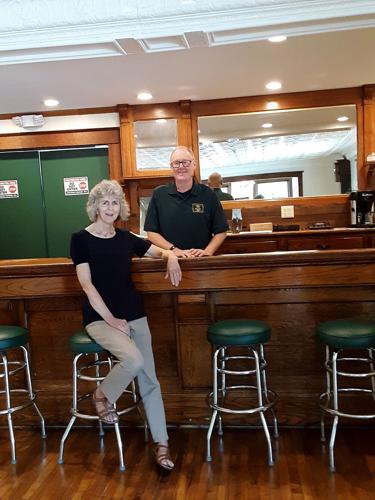 Tim and Catherine Cooper, new owners of the Walsh Hotel, sit at a bar in the tap room, which is named O’Brien and Cealliagh (Irish for Kelly). The room has its original tin ceiling. 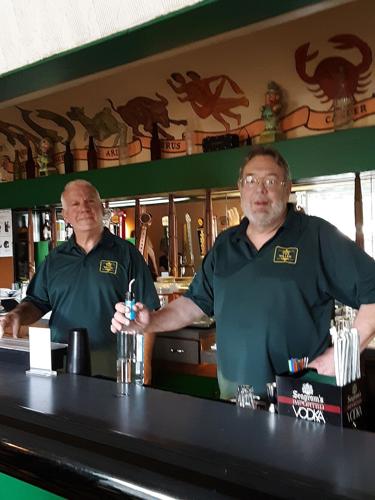 Dave Minervino, left, and Marc Law are the new bartenders at the Walsh Hotel. Both are Medina natives and lifelong friends.

The Walsh Hotel at 525 West Ave., Medina, built in 1852, is open for business by new owner Tim Cooper, after a three-year renovation effort.

Tim and Catherine Cooper, new owners of the Walsh Hotel, sit at a bar in the tap room, which is named O’Brien and Cealliagh (Irish for Kelly). The room has its original tin ceiling.

Dave Minervino, left, and Marc Law are the new bartenders at the Walsh Hotel. Both are Medina natives and lifelong friends.

MEDINA — A historic landmark in the village has reopened after being totally remodeled by its new owner.

“I had looked at it in December 2018 when Polar Express was running at the Medina Railroad Museum,” Cooper said. “There were a lot of people and I thought this presented an opportunity.”

The history of the Walsh Hotel goes back to 1852 when the Rochester, Lockport and Niagara Falls Company completed the railroad through Medina. Previously, hotels and taverns sprung up adjacent to the Erie Canal basin, but the development of the railroad had an immediate effect on the canal. Soon, New York Central Railroad Company was the primary transportation provider.

The first depot was a small stone building close to the railroad on West Avenue, and the adjacent lot on the west side of the street was the obvious site for a hotel, a waiting and meeting place for travelers, particularly since the depot provided sparse comfort.

Aaron Clark (who also built the Alabama Hotel) was granted a license for the Clark Hotel in 1861 and sold it to Frank Sloat in 1884. Later Thomas Lysett owned it. Eugene Walsh purchased it in 1903 and renovated and enlarged it with 38 rooms.

In 1904, Francis Burton Harrison, Democratic candidate for lieutenant governor, arrived by train to campaign at the hotel, and then went to dinner at Bent’s Opera House. Although he didn’t win, he went on to become governor general of the Philippines.

In 1916, New York City attorney Grace Humiston was there to champion the innocence of West Shelby resident George Stielow, who had been wrongly accused of murdering his employer. Humiston would later prove Stielow’s innocence with the use of forensics for the first time to solve a murder.

An article in the June 30, 1938, edition of the Medina Tribune reported that any man in Western New York who was asked if they knew where the Walsh Hotel is would beam with recognition brought on by memories of “succulent steaks, broiled chicken and braised short ribs of beef, all served with steaming bowls of gravy.”

Historical accounts say Walsh “virtually built over” the hotel into one of the most up-to-date hotels between Buffalo and Rochester, with 38 cheerful sleeping rooms, each furnished with electric lights and electric call bells, steam heat and “special attention to sanitary conditions.” The hotel was frequented by commercial travelers and local businessmen, and professionals lunched there on a regular basis. It was a popular venue for business meetings, bridge tournaments and dinner parties, all of which sustained it through Prohibition and the Great Depression.

Frank Cardone bought the Walsh in 1941, and remodeled it after a fire in the barroom area in 1959. He ran it until 1977, when he conveyed it to Guy Chiarolanza. No food or beverages were sold there in recent years, and it operated strictly as a boarding house.

After his purchase, Cooper spent three years totally remodeling the downstairs. The upstairs remains a work in progress. He has no plans to open a restaurant inside, but does offer sandwiches from Sourced Market and Eatery.

Cooper’s renovation included gutting the barroom, adding a window for more light, moving the staircase to the outside of the building, taking out a cooler, moving a wall, putting a second bar on the north side in a room called the O’Brien and Ceallaigh (Irish spelling of Kelly) Tap Room. This room is available to rent for private parties and social gatherings.

He also upgraded the heating and cooling, did lots of painting, maintaining the tin ceiling and tin wainscoting, and made roofing and siding improvements on the outside.

Cooper has hired two bartenders whose history is entwined with one other and with Cooper.

Marc Law and David Minervino both grew up in Medina and have been lifelong friends. Cooper’s older brother Jim and Marc went to school together. Marc’s grandmother was Mildred Cleary, who owned Cleary Funeral Home on Park Avenue and was instrumental in Cooper’s decision to become a funeral director.

Cooper was working on the hotel building one day when Law stopped in and offered to help if he ever got to that point.

“I did eventually get to that point,” Cooper said.

Law left Medina for 35 years, pursuing a career with hotels, restaurants and bar management. He began tending bar in 2010 and worked in West Virginia and Southern California, before returning to Medina 10 years ago.

He likes tending bar because, he said, “It’s such a positive atmosphere, and you’re constantly meeting people.”

Minervino worked at Kodak for 22 years and was a dealer in a casino for four years. He worked for Chiarolanza for three years in the late 1970s, and at Tillman’s Village Inn for 30 years until that closed in December 2021.

Like Law, he loves bartending because of the social activity and all the people he meets.

Cooper also has a family background in the tavern/bar business. Edward Kelly, who built O’Brien’s Pub on Main Street, was his great-grandfather. Cooper’s grandfather Francis O’Brien married Kelly’s daughter Margaret and they ran the pub as O’Brien’s and Kelly’s. Hence, Cooper’s name (O’Brien and Ceallaigh) on his tap room.

The Irish influence also includes Cooper’s wife Catherine, who is from County Kerry.

Cooper said it is an interesting fact that in old time Ireland, the pub owner in a rural area was usually the undertaker.

In restoring the Walsh, Cooper said it was his goal to create something that has been lacking in the area: the ability to go into a pub and talk.

“People who come in here actually feel refreshed,” Minervino said. “They talk to one another. There are no cell phones, no TV, just old-fashioned conversation.”

Cooper said the Walsh is ideally poised for a new chapter.

“The Walsh is a survivor,” he said. “It has character. It has survived the decline of the railroad, Prohibition, the Depression and massive social changes. It started out and thrived because of its proximity to the railroad and I think that has come full circle. It will benefit the Medina Railroad Museum and the museum will benefit it. There are a few more chapters in the Walsh’s history. It is still a landmark — and a feisty, enduring one.”