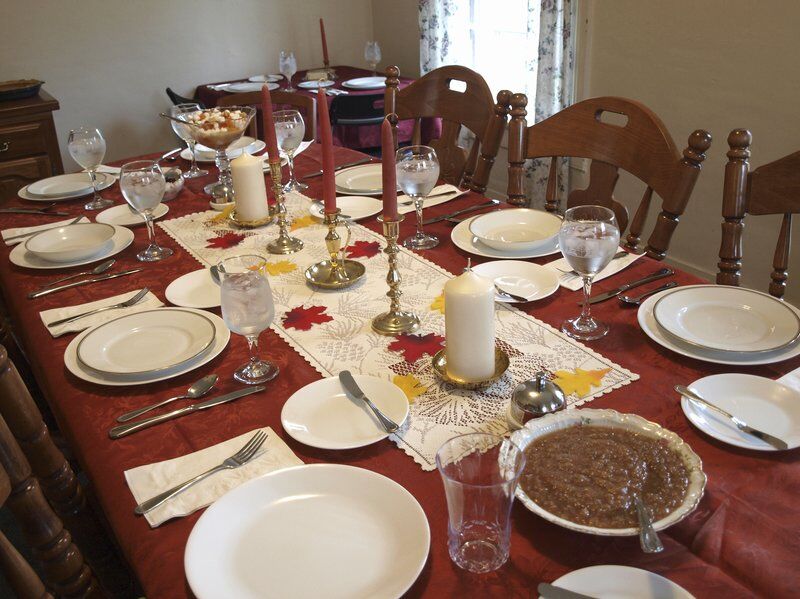 Todd R. McAdam/Cortland StandardIt's a bit of extra work, but washing the dishes avoids the need to buy disposable dinner ware. How much you save depends on how many you feed. 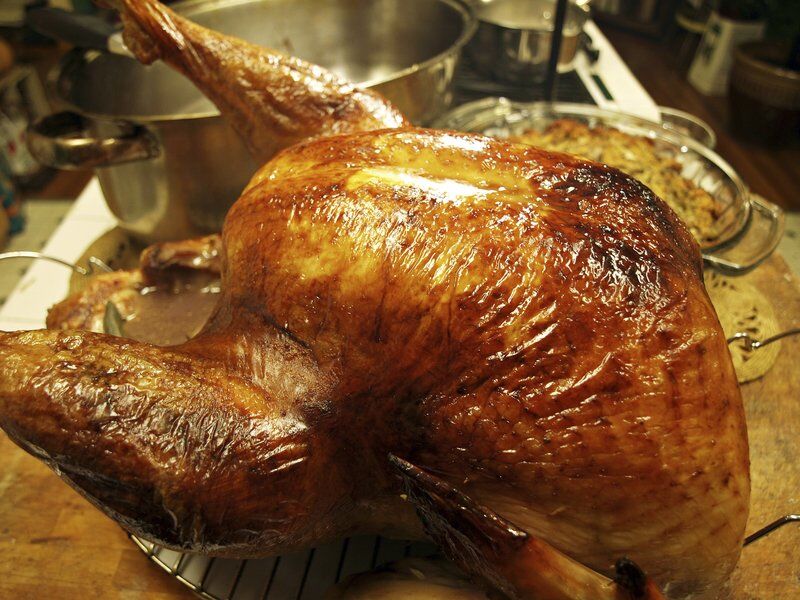 Todd R. McAdam/Cortland StandardTurkey may remain the centerpiece of your Thanksgiving dinner, but roast a smaller bird. It'll save you money, and you can fill your table with more vegetables and side dishes.

Todd R. McAdam/Cortland StandardIt's a bit of extra work, but washing the dishes avoids the need to buy disposable dinner ware. How much you save depends on how many you feed.

Todd R. McAdam/Cortland StandardTurkey may remain the centerpiece of your Thanksgiving dinner, but roast a smaller bird. It'll save you money, and you can fill your table with more vegetables and side dishes.

The headline was enough to make one choke on a giblet: “This Year’s Thanksgiving Feast Will Wallop the Wallet.”

The New York Times report Oct. 25 noted that one of the cheapest Thanksgiving dinners in a decade in 2020 would be followed by one of the most expensive.

The Consumer Price Index for food had climbed 4.6% — meats, poultry, fish and eggs were up more than 10%.

The reasons are myriad, and largely irrelevant, if you’re looking to lay out a feast for the family. Supply chain problems, increased feed costs, increased fuel costs, labor shortages, even extreme weather are all factors.

But that still leaves you trying to stretch a budget without the Thanksgiving day table feeling like an empty buffet line.

It can be done. I grew up in a grocery store; I’ve been cooking for 45 years, have friends and relatives who were chefs and restaurant owners, and a couple of theories that chef Mary Kiernan of Homer, an associate teaching professor of hospitality management at Syracuse University, largely confirmed.

A large factor in the cost of a Thanksgiving dinner isn’t the food, it’s the time.

All those conveniences you acquire just to make the tasks of planning and preparing a 10-dish meal (turkey, stuffing, potatoes, gravy, two vegetables, two pies, cranberry sauce and rolls or bread) a bit easier come at a cost.

If you can make the time, you can save the dough.

You know that if you try to prepare a Thanksgiving dinner from scratch in one day, you’ll end up frazzled and fried. It’s a huge undertaking.

But if you create a plan and cook ahead, you can buy cheaper ingredients that require a bit more preparation than ready-made alternatives.

But five minutes with a knife, a vegetable peeler and a spoon and you can get a whole butternut squash for about 79 cents a pound and prepare it the weekend before the feast. You’ve saved $5 for a typical squash.

Pies? Sure, you can get a tasty, hand-made apple pie for about $14.

You can buy the apples and make two, yourself, for about $5. That saves another $25.

Stuffing bread? Someone sells this stuff? It costs $3 for a 12-ounce container. Start now. Save the crusts from a couple loaves of bread — or make your own bread. (Add sage and time to the bread dough and it’ll taste better, too.)

As a chef, Kiernan has a well-honed understanding of how much work goes into a meal. Thanksgiving isn’t about that.

“No one should have to work the Wednesday before Thanksgiving,” Kiernan says. “Making the whole meal on the day-of is exhausting if it isn’t something one is accustomed to doing.”

So, farm out the meal. Have guests bring side dishes or pies. It’s a great way to share traditions. Does one of the in-laws come from an Italian family that put a lasagna on the Thanksgiving table? Great. Does that cousin from Utica like making Utica greens? Very portable.

Dueling pies? So long as it doesn’t end up in someone’s face, letting people compare recipes in a bake-off can be fun.

The challenge is to make sure you have enough oven and stove space to re-heat everything. That’s just planning. Planning is cheap.

Go with a smaller bird. Proteins are expensive, particularly this year. Instead, offer more side dishes.

“With the turkey being THE symbol of this particular holiday, it is hard not to have one,” Kiernan says. “That said, in our house I have found over the years that it really is symbolic and we always have many side dishes — so much so that protein may even be tertiary because there’s that dessert course to save room for. “

Don’t worry about the corn or peas, Kiernan says, they’re just starches. Think veggies. Green bean casserole is an idea, but can be loaded with salt and fat if you’re using convenience ingredients.

A big russet potato, roasted in the oven with the turkey, is luxurious — and simple. But potatoes like that cost nearly $1 a pound. Buy a bag of small russets, or Yukon golds, or something similar, and you pay 60 cents a pound.

Boil them, mash them (a touch of garlic and Parmesan is a good addition), add gravy and you’ve just saved 40 cents a pound. Probably more, because a big potato is more than some guests want.

Buy gravy? Seriously? A jar of some salt-laden, largely flavorless gravy-like substance costs about $2.84 a pound. You can make your own for the price of a couple of tablespoons of flour. It’ll taste better, too.

Here’s a tip I learned from my grandmother, who made great gravy. Take the neck, heart, and other organs (except the liver) from the turkey. Simmer them in about 3 cups of water the day before the big day. Add a couple of sage leaves, some garlic or other flavorings. You’ve created a tasty turkey stock. You can freeze it, if you make it that far in advance.

Pour off a couple of tablespoons of turkey drippings while the bird rests, add a similar amount of flour to create a roux, then make the gravy using the stock. Much more flavor than anything from a jar. It’s free, and you can do it while the turkey is resting before you carve.

Cranberries? You can buy a can of stuff that comes out shaped just like the can for about $1.50 or $1.70. For about the same price, you can buy a bag of fresh cranberries, Rinse, then simmer them in a bit of liquid with some sugar and you’ll have more sauce than you could have purchased.

But wait, there’s more. The liquid you simmer them in doesn’t have to be water. It could be apple cider, orange juice (maybe white wine, though I’ve never tried it.) You can add cinnamon, if you want, or maybe use brown sugar instead of white. More flavor, not more money.

You can do both. Add some of the strawberries or blueberries you picked last summer, or maybe a diced, peeled apple. The sweetness of the fruit will balance the tart of the cranberry, even as it increases the volume of the dish. More and tastier. What’s to lose?

All that takes time, so budget for it. And time is money. But this meal is about flavor, and that doesn’t always require time.

Whoever said you had to serve pie? Rolling a crust can be a bit tricky. So don’t do a crust, serve an apple cobbler or apple crisp. It’s the same basic apple flavors — cinnamon, nutmeg, brown sugar — with an easier preparation.

Don’t want to bother with pumpkin pie? Try a pumpkin mousse, or just make the pumpkin custard and serve it in ramekins. No crust at all.

Peel the potatoes? Peels are quite edible. They add vitamins C and B6, as well as minerals. So save the effort and increase the nutrition. Besides, the peels add a nice texture when mashed.

Wait a sec. What? Absolutely.

Paper plates, plastic forks, disposable cups and one-use aluminum roasting pans and whatnot are convenient. But they cost. Besides buying them, you pay to throw them away, too, either to your friendly neighborhood trash hauler or in higher taxes to your municipality.

So take the cheap, and environmental, route. Use the dishes you have.

Have someone else do the dishes, if you’d like, the household teenager or non-cooking spouse. If the meal is as good as you’ve just made it, they’ll be thankful.

And that’s what it’s all about.