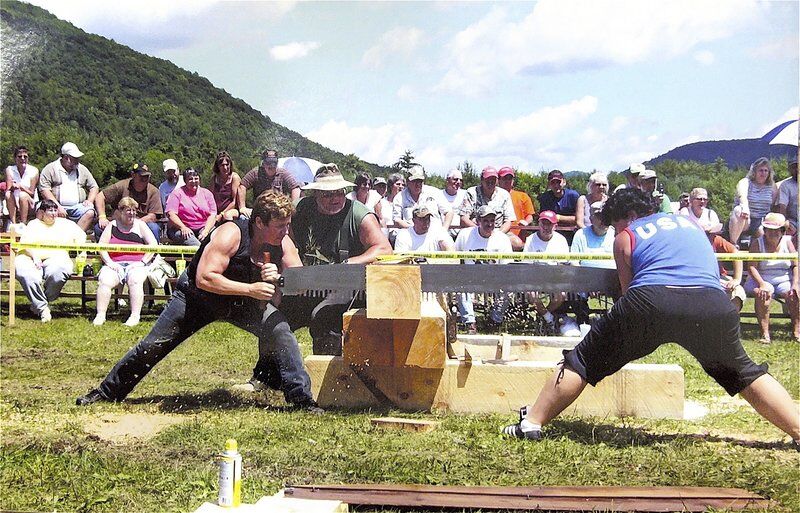 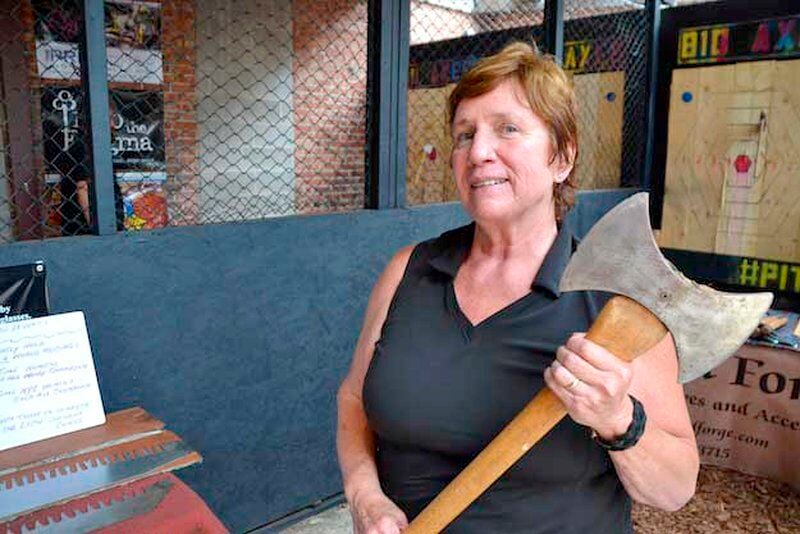 World champion wood cutter Mary Dooley of Waterport tried her hand at hatchet throwing at 810 Axes in Medina when it opened in 2019. She has just been inducted into the Paul Smith's College Hall of Fame. (Virginia Kropf / contributor)

World champion wood cutter Mary Dooley of Waterport tried her hand at hatchet throwing at 810 Axes in Medina when it opened in 2019. She has just been inducted into the Paul Smith's College Hall of Fame. (Virginia Kropf / contributor)

WATERPORT — Mary Dooley has been inducted into the Paul Smith's College Hall of Fame.

The world champion wood cutter was informed of the honor by letter from the college.

“The past and present success of PSC and its students were made, in part, by your personal and significant contributions,” the letter read. “You and many others, some living and some dead, will be inducted and honored at a special ceremony in the near future.”

Dooley and a classmate were the first women to compete with the college’s Forestry Club Men’s Woodmen’s Team in 1972. Dooley captured the coveted Tall Tale contest with her tale of coach Gould Hoyt’s fascinating introduction to women entering the arena. Paul Smith’s College fielded the first all-women’s team in North America, of which Dooley was a member. The team would go on to dominate the Eastern collegiate circuit early on and continues to post record accomplishments today.

Dooley said she probably inherited her competitive nature from growing up the second youngest in a family of seven, in Rochester. In 30-plus years of competing, she was named a world champion in crosscut log sawing numerous times, and she was a member of the winning women's team at the 2009 Olympics at Sydney, Australia.

Dooley thinks her love of the woods began as a child when her parents visited the Adirondacks every summer. At Paul Smith’s College, she received an associate’s degree in forestry. She also attended Cornell, where she learned to be a farrier. Then she took a job as a logger and horse teamster in the forests in Wyoming, Colorado, Washington and Oregon, working in environmentally endangered areas and living in logging camps with all men. The only other woman at camp was their cook, she said.

After several injuries, Dooley decided she had enough of logging and moved back to Western New York, where she took a job with Terry and Sue Williams of Royalton, owners of the Olympic champion Abdullah.

It was there she met her first husband, Wayne Bruning, who had a farm on Chestnut Ridge Road. They were married in 1980 and had four children. In 1991, when the oldest was 9, their twins were 6 and the baby was 3, Wayne was killed when a farm wagon overturned on him. Dooley was left with a farm to run, 60 cows to milk and four small children to care for.

She would get up at 4 a.m., milk the cows and then get the kids dressed for school. At the time, she had a baby sitter so she could go to work at Zwicker’s Aquatic Club in Lockport. She hired someone to milk for her at night, and on weekends, she played catch-up, she said.

Wayne had been friends with Carlton Plummer of Waterport, also a farmer, and after Wayne's death he came to check on Dooley, she said. In 1993, they were married and she moved to his home.

When Plummer asked what she wanted for a wedding present, she replied, “A competition saw.”

“I still have it,” Dooley said. “I earned a couple of world championships with it, some of which still stand.”

Paul Pfenninger of Chili was Dooley's sawing partner for 15 years, and their world record still stands. Dooley still has five world records standing in Jill-and-Jill and Jack-and-Jill sawing. She has been a world champion in sawing, chopping and axe throwing.

Carlton died in November 2019, and at age 67, Dooley has retired from the competition circuit but continues to teach swimming at Medina High School, a job she said she loves. While working at Zwicker’s, she coached the USA Swim Team, and in 1996, she started coaching in Medina. She has been teaching swimming in Medina since 1998.

“Being able to swim every day is like a fountain of youth,” she said. “It’s the next thing to being outside.”