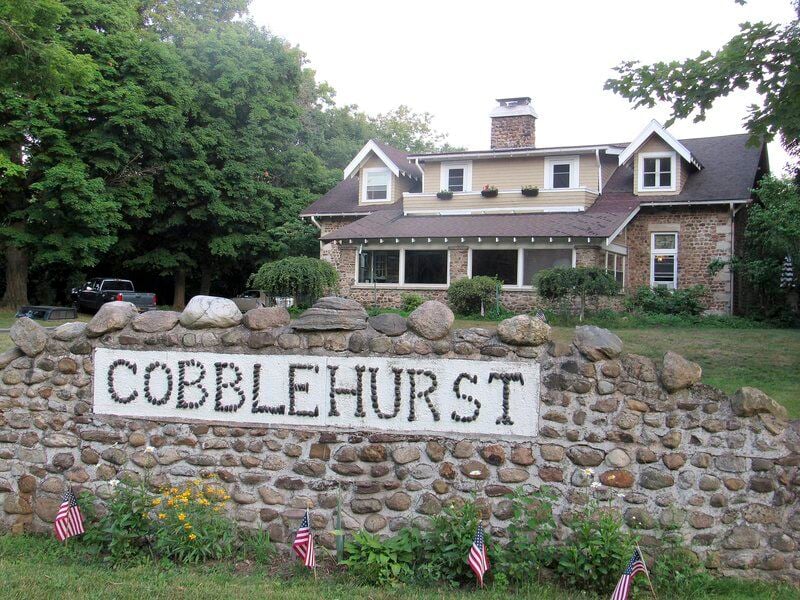 The cobblestone house at 8856 Ridge Road, Gasport, was restored by Victor Monter and his wife Julie Scanio, formerly of Lockport, who recently sold it. While living there, the couple found a painting and an etching of the home, which they donated to the Cobblestone Museum at Childs. The historic home was built in 1834-36 as a Quaker meeting house. This is a view of Cobblehurst from the driveway, showing the front sunporch, which houses a swimming pool. 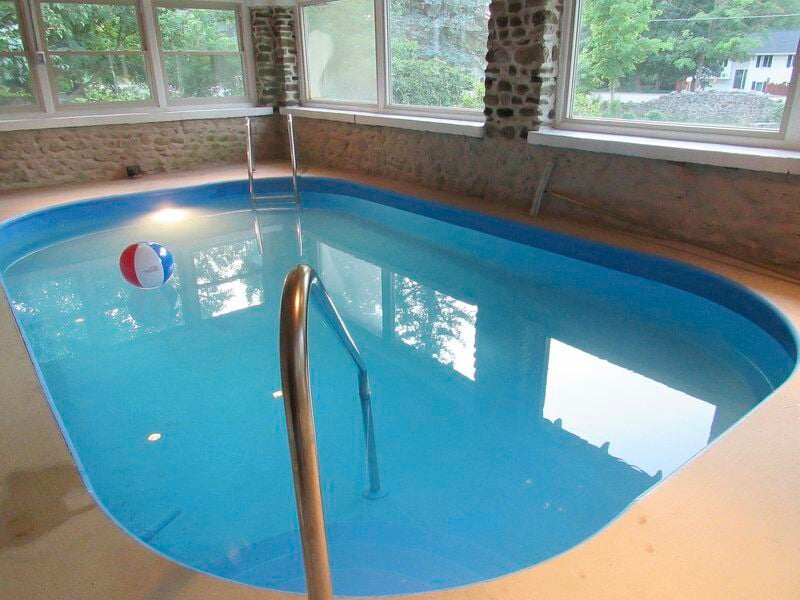 This is the pool in the sunroom at Cobblehurst, looking out onto Ridge Road. 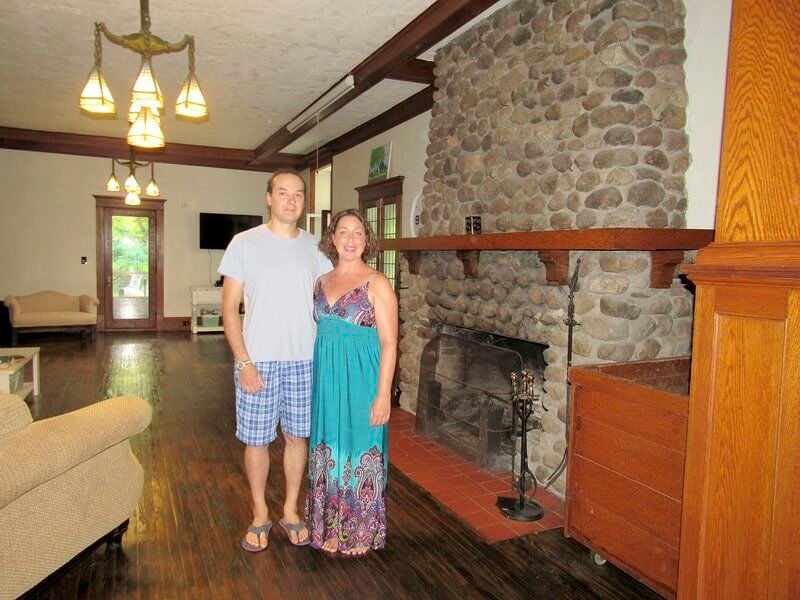 Victor Monter and his wife Julie Scanio by the massive stone fireplace in the great room of Cobblehurst.

The cobblestone house at 8856 Ridge Road, Gasport, was restored by Victor Monter and his wife Julie Scanio, formerly of Lockport, who recently sold it. While living there, the couple found a painting and an etching of the home, which they donated to the Cobblestone Museum at Childs. The historic home was built in 1834-36 as a Quaker meeting house. This is a view of Cobblehurst from the driveway, showing the front sunporch, which houses a swimming pool.

This is the pool in the sunroom at Cobblehurst, looking out onto Ridge Road.

Victor Monter and his wife Julie Scanio by the massive stone fireplace in the great room of Cobblehurst.

GASPORT — A painting and an etching of Cobblehurst, the captivating cobblestone house at 8856 Ridge Road, have made their way into the exhibits at the Cobblestone Society Museum at Childs. The art works were donated by the couple who undertook extensive preservation work on the nearly 180-year-old structure.

Victor Monter and his wife Julie Scanio recently closed on the sale of Cobblehurst to a couple from the United Kingdom who moved in late last month.

Monter and Scanio, property renovation enthusiasts, discovered Cobblehurst in 2015, while searching for spacious living quarters with a pool. They moved in and dove into a massive rehab job, preserving the "bones" of a structure that had been empty for years while making it fit for 21st century living.

Then, last year, after all the hard work was done, they decided to downsize and turn attention to other old properties in the area that need rescuing.

As they vacated Cobblehurst, Monter and Scanio decided to turn over to the Cobblestone Society a painting and an etching of Cobblehurst that they had uncovered while cleaning it out.

The donation is much appreciated, Cobblestone Society Museum director Doug Farley said. Cobblehurst, which has always garnered a lot of interest from passersby, was the most-visited site on the museum's 2019 tour of nine cobblestone homes in Orleans and Niagara counties, and the preservation work that Monter and Scanio did on it is a gift to the community.

“We are so happy to celebrate their achievement by displaying the painting and etching,” he said.

According to information provided by Monter and Scanio, Cobblehurst was built in 1834-3185 as a Quaker meeting house.

A history of the house, compiled by former owner Darrell Mantei in July 2000, says the Quakers moved to new quarters in Gasport in 1905. The building sat vacant until 1917 – and information on who purchased it next is confusing.

One source says Cobblehurst was purchased by a Mrs. Pratt from Albion in 1917. Mantei wrote that Pratt remodeled the house with exquisite taste and much money, touring Europe for ideas and bringing back the iron fireplace utensils. She had a cellar hand dug under the old church, with five-foot thick walls to support the foundation; added a second story with the construction of six dormers; built a cobblestone wall on the north and west sides of the property; and added a pantry room, porches, a patio, a garage with apartments for servants, and a toolshed, all of which remain in good shape today.

Inside, the house was done in Mission style, with the liberal use of oak in the stairway, baseboards, cupboards and built-in drawers, and leaded glass wall cases. Mantei wrote that Pratt appointed the house with several stained glass windows (which the current owners said are Tiffany), iron fireplace utensils from Scotland and three hanging five-bulb bronze light fixtures from the Roycroft Guild in East Aurora. All of these also are in good shape and working order today.

Mantei and his wife, Barbara, purchased Cobblehurst from the William Webster family in 1967.

Conflicting information about Cobblehurst's prior owners comes from C.W. Lattin, former Orleans County historian and longtime director of the Cobblestone Society Museum, and from documents that Victor Monter found on the property.

Lattin previously penned an essay about one-time owner Emma Reed Nelson Webster, an Albion native who he credited with remodeling the Quaker meeting house into a residence and dubbing it "Cobblehurst." Lattin said it was Emma who laid out the elaborate gardens, stone walls and garden pond and built the sun porch on the north side. Further, he said recently in response to questions about the property's history, he had no recollection or information about a "Mrs. Pratt."

Monter, meanwhile, shared a notebook containing a hand-written letter by a man who was hired to help work on the house in which he refers to Mrs. Nelson having a nephew in Kenmore named Pratt. He also shared a letter in which it's stated that the father of Gladys Pratt Gill of Connecticut bought Cobblehurst from his cousin, Emma Reed Nelson Webster, in 1929, and retired there to raise gladiolas. The letter further stated that Emma had purchased Cobblehurst in 1915, developed ideas for its renovation after traveling in Europe and spent more than $50,000 turning the old meeting hall into a home.

It is reasonable to assume that William Webster, from whom the Manteis purchased Cobblehurst, was a descendent of Emma, Lattin observed.

Mantei's written history of Cobblehurst states the house was used as a bed-and-breakfast in the 1920s and was, briefly, a restaurant and the site of a breakfast-time radio show at some point before the end of the 1950s. An unnamed owner installed a swimming pool in the sunroom in the 1950s-60s, according to Lattin.

Cobblehurst renovators Victor Monter and Julie Scanio met on a blind date about seven years ago, just after Monter, an engineer, purchased his first fixer-upper, an 1885 house at 185 South St., Lockport. Soon after they met, Monter bought another property, the old Stranges grocery on Grand Street in Lockport, where Scanio opened an antique store on the first floor and apartments were let above. By now, Monter had the remodeling "bug" and he purchased several other properties to renovate and rent.

After Monter and Scanio were married and had their son, Bradley, now 4, Monter decided to change careers. He gave up being the director of business development for a plastics company in Niagara Falls to become a full-time landlord.

“I was gone all day and getting home late at night. I never saw my son, so I decided to leave my career,” he said.

Monter said he and Scanio buy the worst houses on the market and transform them to structures that amaze people.

“I’m a one-man band,” he said. “I have several who help when I need it, but I do 98 percent of the work myself. Being an engineer, I can also do the blueprints.”

The couple are currently doing two major renovation projects in Gasport, both on State Street. One's an 1868 build that's been vacant for years; the other, built in 1885, has a collapsing foundation and a caved-in roof.

Monter and Scanio found Cobblehurst while expecting their child and in search of a bigger place to live.

“I wanted an older house, and Julie was adamant about having a pool,” he said.

Cobblehurst fit both their wishes, flaws and all.

“We looked at it and it was in such bad shape,” Monter recalled. “The roof leaked. The hardwood floors in the great room were all warped, in some places raised six to eight inches. Plaster was cracked on the walls and hanging from the ceilings.”

Once they embraced it, Monter took up every piece of flooring, sanded and trimmed it to fit, replastered all the walls and ceilings, installed new electrical service and converted one of the five upstairs bedrooms into a walk-in closet. Outside, five dump truck loads of leaves were hauled away.

“We got a ton of history with this house,” Monter said.

The 5,200-square-foot Cobblehurst is built on a sand bar in a dried-up lake bed and none of the materials used in its conversion from a church is native to the area, according to Monter. The first post-Quaker owner, whether it was Mrs. Pratt or Mrs. Webster, had everything except the cobblestones imported from Europe. There's a giant fireplace in the great room and another one in the master bedroom upstairs. Cobblehurst was one of the first homes on Ridge Road to have electricity and running water, Monter said.

Monter and Scanio put Cobblehurst up for sale more than a year ago, after deciding they wanted to establish permanent residence in Florida and buy a modular home retirement community. Their plan was to live in the Gasport area five months of the year and tend to their fixer-uppers, and that changed when there were no prospective takers on Cobblehurst.

Plan B, staying put and establishing a winery, was well in progress when a buyer finally surfaced.

“We had only five days left in our realtor’s contract and we weren’t going to relist it,” Monter said. “The same day I got my winery permit in the mail, we got an offer on the house.”

Monter and his family are now living in an apartment in one of their Gasport fixer-uppers. Currently they own more than a dozen rental properties in the Lockport area and Monter has his eye on another fixer-upper on Route 31. The pandemic derailed their plans to live part of the year in Florida but Monter said that is their eventual goal.

The open-air Cobblestone Society Museum, 14389 Ridge Road West, Albion, is open for tours by appointment only this summer, at 11 a.m., 1 p.m. and 3 p.m. Wednesday through Saturday. Each tour is limited to four people from the same household or group. For reservations, go to www.cobblestonemuseum.org or call (585) 589-9013.