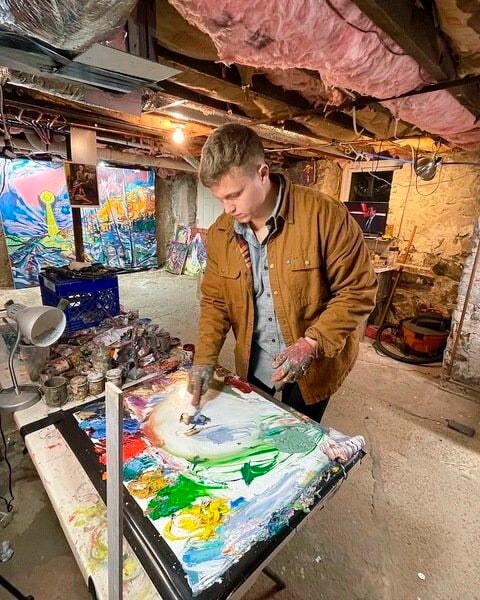 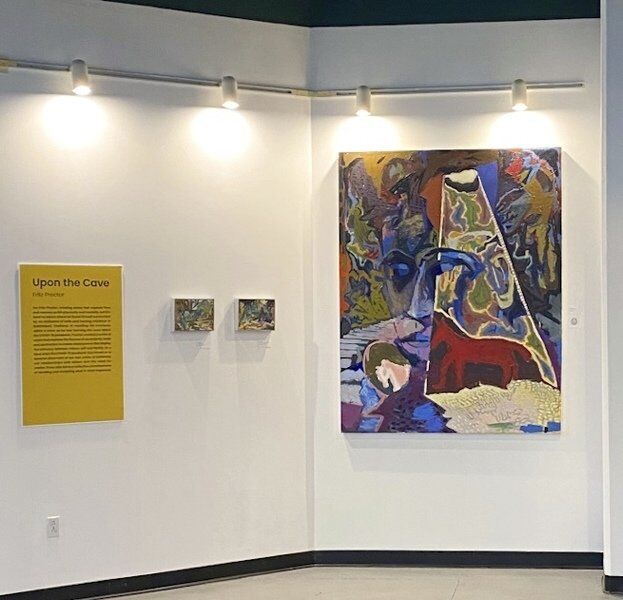 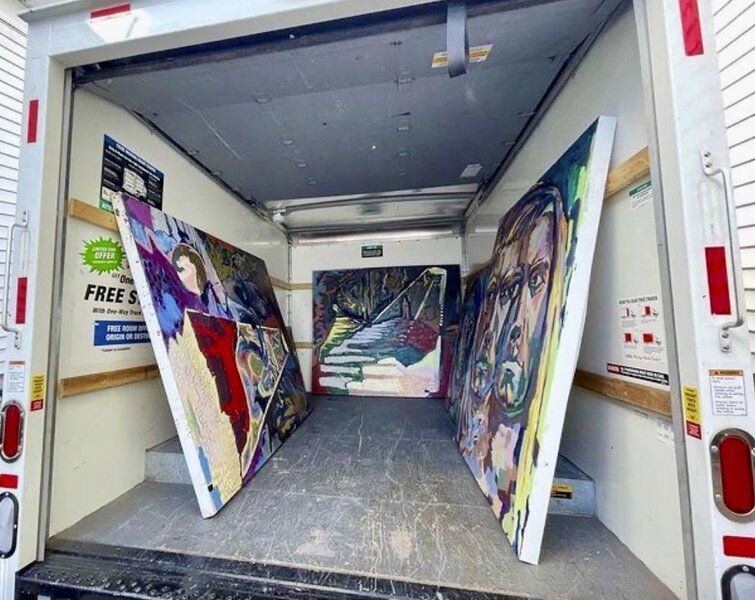 Courtesy of Fritz ProctorArtist Fritz Proctor drove three of his large paintings to Buffalo for the grand opening of the Buffalo Art Movement gallery.

Courtesy of Fritz ProctorArtist Fritz Proctor drove three of his large paintings to Buffalo for the grand opening of the Buffalo Art Movement gallery.

When he was a child, Fritz Proctor IV didn’t have to go very far to understand the power of the art of painting.

His father, Fritz Proctor III, was a truck driver who also painted. When he wasn’t driving a tanker truck delivering gasoline, the older Proctor favored painting realistic scenes and landscapes. Now retired, he paints full-time. He was an early influence on his son.

Young Fritz, now 23, is light years removed from being considered an overly brooding artist. He’s cheerful and energetic, and his work is bright and bold.

His paintings, and how he constructs them, are drawing attention throughout the world. During the day, he works for the State of Massachusetts Parks Department making signage in Boston. His passion for painting has brought him unexpected attention.

This talented graduate of Niagara Falls High School is a superstar on social media. On his TikTok account, he delivers lively information in the short videos for which the app is known, highlighting how he creates his colorful paintings.

These videos, some of them gilded with a sense of humor, have drawn a staggering audience. More than 1.6-million TikTok users follow his account. Take that in.

One million, six hundred thousand people (and growing) eagerly await the next video. Look at it another way. Give or take a few thousand, his numbers are the equivalent of the population of Philadelphia, Pennsylvania, the sixth largest city in the United States.

If TikTok isn’t your cup of social media tea, you can follow Proctor on Instagram. He places his videos on Fritz Does Art (fritzdoesart_). There are 90,000+ followers, with more every day. If you look, find the popular graham cracker video. A second Fritz Does Art account, without the underscore, is for the personal side of his life and has more than 5,000 followers.

How did a young man from the LaSalle neighborhood of Niagara Falls swing into the hierarchy of painting and social media so successfully?

His exhibit, “Upon The Cave,” is a major element of a grouping of art for the grand opening of the new Buffalo Art Movement (BAM!) Gallery at 255 Great Arrow Avenue in the former Pierce-Arrow Motor Car Company factory in Buffalo. The exhibition, which includes works by other artists, continues into February.

The founder of BAM! is Dr. Francisco J. Hernandez-Ilizaliturri (best known as Paco). He is the chief of the Lymphoma Section and professor of Oncology at the Roswell Park Comprehensive Cancer Center in Buffalo. According to Jeff Heras, a BAM! spokesperson, “during his years of collecting art, Paco has been able to curate a large collection of works that highlight and celebrate the talents of Western New York artists. He sees his gallery as an exhibition space and art incubator, which will strive to foster collaboration among artists, patrons, students, galleries and art institutions within the community.”

Fritz IV’s paintings are outstanding reflections of his relationship with nature and his own experiences. He draws inspiration from his family, his travels, and his hope that what’s important to people prevails in a positive way. He values the diversity of nature. One of his pleasures is hiking. His large paintings are oils. His smaller works are created with gouache, which is an opaque watercolor.

Additionally, he’s received great encouragement to attain his goals, not only regarding the guidance from his father, but also from his mother, Vicky, who works for a Grand Island pharmaceutical company. He said that she was “extraordinarily supportive of his creative interests – motivating him, but never pushing him.” Both parent were always ready “to provide the tools of the artistic trade.”

Rounding out this family that values hard work, friendship, and creativity are Fritz’s younger siblings, twins Billy and Rae-Lynne.

There’s also his uncle, Tom Proctor, a sign artist, for whom he worked extensively, including while getting his arts degree from the University of Buffalo. “He taught and inspired me immensely with my art work,” said Fritz. Another uncle, Paul, is also an artist, working in the field of metal sculpture.

Residents of Niagara Falls know Art Alley, the urban gallery of murals in the city. It shouldn’t surprise anyone that the two Fritzes and Tom worked on some of the street side artwork, along with another influence for Fritz IV, the celebrated Niagara Falls booster, Rob Lynch.

Lynch is the award-winning, multi-talented drummer (and other instruments), painter, composer, teacher, member of the Buffalo Music Hall of Fame, and veritable one-man chamber of commerce for boosting the Falls as a destination with endless surprises for visitors.

Lynch was Fritz IV’s art teacher in high school. He calls Lynch a major reason for his succeeding at what he does. “He showed me that art could be a lifestyle, not a hobby.”

Five years ago, Fritz fell in love with a woman he met in the most wonderful way. He was an 18-year-old working at collecting trash around the American Falls. A Thai woman from Bangkok named Blair was in Niagara Falls on a work-travel visa taking photographs for Kodak. They struck up a conversation.

The rest, as is often said, is history. Fritz and Blair have been married for three years. He’s been to Thailand numerous times. She’s a fine-art photographer.

They were recently in Buffalo for his art opening. The couple drove his paintings to the exhibition from Boston in a rented truck and stayed in Niagara Falls at his family’s home.

Will there be a Fritz Proctor V?

Fritz is hopeful. “After all,” the young artist said, “you have to keep the name going.”

Michael Calleri reviews films for the Niagara Gazette and the CNHI news network and writes about other arts and entertainment subjects.. Contact him at moviecolumn@gmail.com.