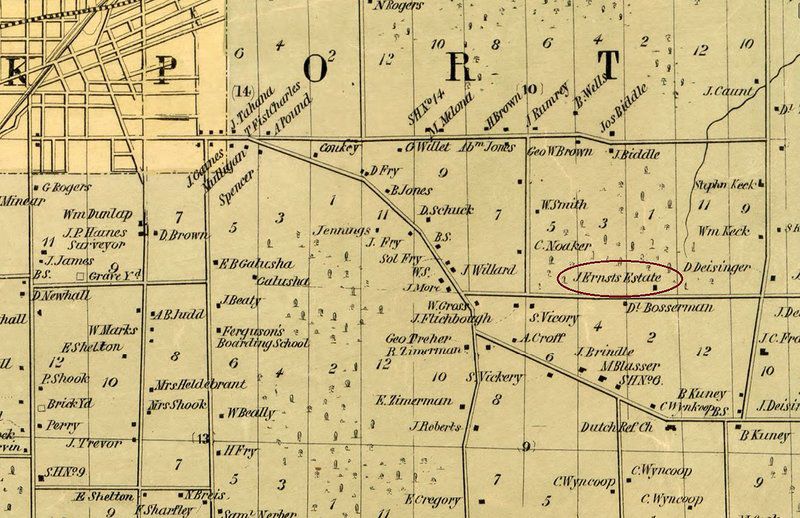 COURTESY LIBRARY OF CONGRESSJohn Ernest (or J. Ernst on this map) settled on what would become Lincoln Avenue Extension around 1831. This map was published in 1852, a few years after Ernest died. Note the original Lincoln Avenue terminated at Beattie Avenue. 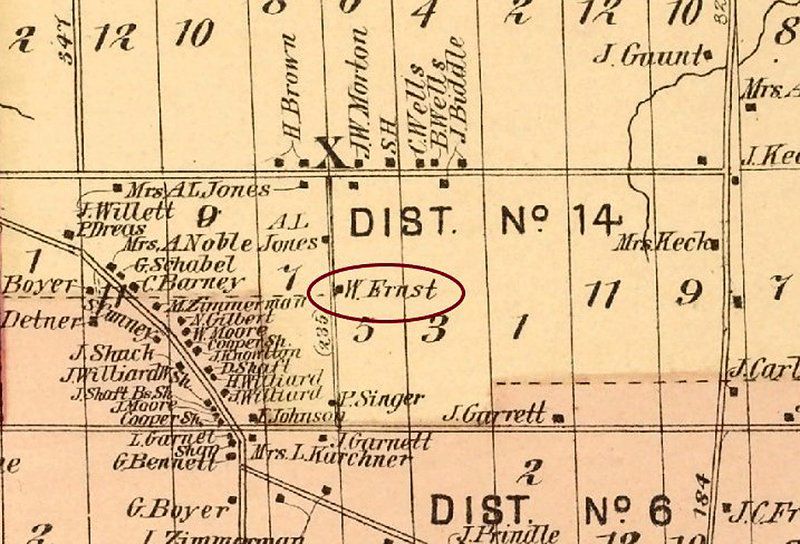 COURTESY LIBRARY OF CONGRESSJohn Ernest (or J. Ernst on this map) settled on what would become Lincoln Avenue Extension around 1831. This map was published in 1852, a few years after Ernest died. Note the original Lincoln Avenue terminated at Beattie Avenue.

Have you ever wondered how a road got its name? If you live on or drive down Lincoln Avenue Extension or Ernest Road, you’re in luck. This article features an area of town once referred to as Johnny Cake Ridge, which includes a street named after President Abraham Lincoln and a road named after an early settler.

Lincoln Avenue Extension and the surrounding area was once known as Johnny Cake Ridge due to early settlers’ propensity for making cornmeal flatbreads, colloquially known as johnnycakes. A traditional johnnycake was made of coarse cornmeal, water, salt and lard. The mixture would be spread onto a wooden board then baked on the hearth.

One of the earliest settlers on Johnny Cake Road, an east-west thoroughfare that began in Royalton and terminated at Akron Road, was John Ernest, a farmer from Perry County, Pennsylvania. He arrived in Lockport about 1831 and shortly thereafter bought 80 acres on what we now know as Lincoln Avenue Extension. He built a log house and immediately began cultivating his farm.

One anecdote about the Johnny Cake moniker is when John Ernest’s wife, Christina, saw the land she remarked that it looked like a giant johnnycake. Another account credits Annah Burtch Atchinson (1805-1884) with inspiring the name. According to Atchinson’s obituary, Annah followed her father Jonathan Burtch while he cleared his land and she planted corn in his wake. When it was time to transform the corn into cornmeal, she used a hollowed out oak tree as a mortar to grind it into a coarse powder.

This area of Lockport was known for its hearty soil, a mix of clay and sand, which supported a variety of crops including corn.

Lincoln Avenue is the southeast boundary of the city of Lockport. It was originally named Newhall Street after Daniel Newhall who owned the south corner of the street at Transit. The road initially ran east from Transit then dead-ended at Beattie Avenue. There was a cemetery affiliated with Grace Episcopal Church located on the northern side of the street; those graves were moved to Glenwood Cemetery in the early 20th century.

As with most, if not all, streets named Lincoln, the appellation was chosen to honor U.S. President Abraham Lincoln, who was assassinated on April 15, 1865. William H. Creagh suggested the name in 1866 and the Common Council of the City of Lockport adopted the name shortly thereafter. That same year the Common Council approved an ordinance to extend Lincoln Avenue beyond the city boundary connecting to Johnny Cake Road, creating the modern day route of Lincoln Avenue Extension.

Patriarch John Ernest died around 1846 in a tree-felling accident. His son William became head of the farm while still a teenager.

Ernest Road runs north to south from East High Street to Lincoln Avenue Extension. Until the mid-20th century, it dead-ended at East High Street. (Day Road was not extended beyond Chestnut Ridge until the 1950s.)  A couple of the earliest settlers on this road were Wait Smith, a farmer from Connecticut, and Pennsylvania agriculturalist Christopher Noaker.

William Ernest bought Wait Smith’s farm on April 1, 1870. This homestead was located on the east side of the road, roughly equidistant from East High Street and Johnny Cake Road. A few years later, about 1876, Ernest built a Victorian home a bit further south, closer to what we now know as Lincoln Avenue Extension.

The road became known as “the William Ernest road” due to the prominence of Ernest and the enormity of his farm, which spanned more than 150 acres. The Ernest farm was described as “one of the best farms in Niagara County” in an 1890 Lockport Daily Journal article. Ernest boasted of a cow that would produce enough cream to make more than 17 pounds of butter every week.

After William’s death, his son Dana Scott Ernest took over the farm. D. Scott Ernest was involved in the Lockport Grange and worked as an elections inspector in addition to his farming duties. After his early death in 1928, his wife Carrie Cook Ernest took the helm. Carrie also worked as a tax collector for the town.

In 1955, John L. Hum and his wife Isabel Aikin Hum purchased the Ernest farm, which they dubbed Suburban Acres. Hum, a liquor store proprietor, had served as a pilot in the Air Force during World War II. He was a noted dog trainer and president of the Niagara Frontier Bird Dog Association. The association’s annual field trials were held at the Hum property. Hum also died rather young, leaving his wife Isabel to manage the farm. In 1966, she sold some land to Ridgemill Realty, who in turn developed the Heritage Acres subdivision by creating Old English Road, which runs east off Ernest Road.

Both the William Ernest homes on Ernest Road are extant. The Ernest family is buried in Chestnut Ridge Cemetery and the Hum family is laid to rest in Cold Springs Cemetery.

Jean Linn is Lockport's town historian, as well as archivist and librarian at Niagara County Community College. You can reach her at jlinn@elockport.com or 716-438-2159.