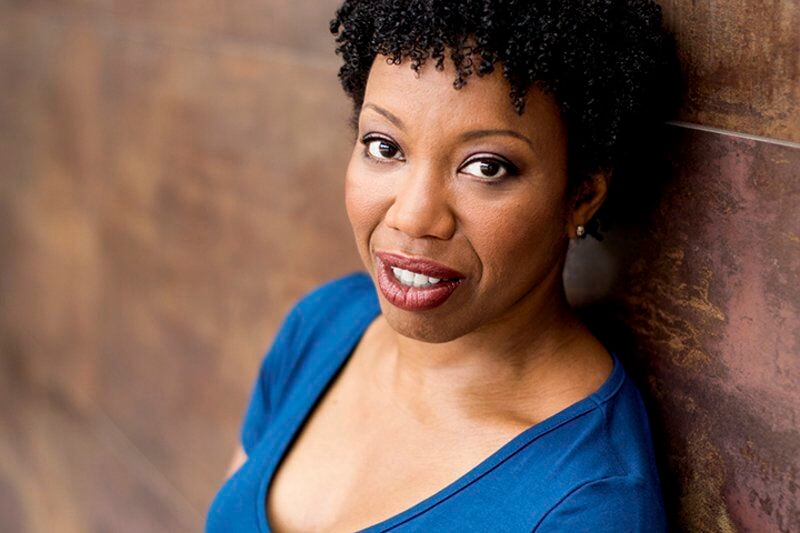 Contributed PhotoNiagara Falls native Litha Portiaeyne Johnson, whose stage name is Portia, is playing Calpurnia alongside Jeff Daniels in “To Kill a Mockingbird” on Broadway. 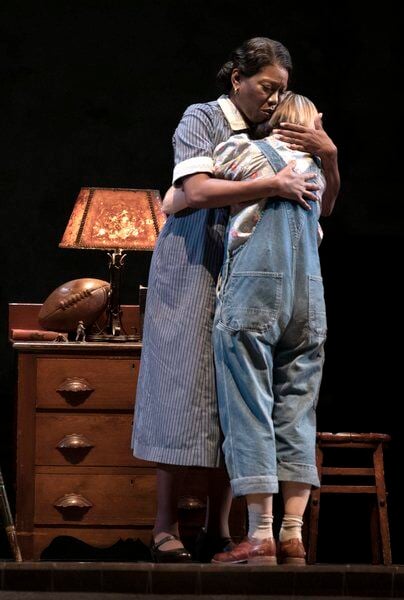 Portia as Calpurnia, embraces Scout, played by Tony-winner Celia Keenan-Bolger, in “To Kill a Mockingbird,” on Broadway. Portia is the stage name of Litha Portiaeyne Johnson, who was born and raised in Niagara Falls.

Contributed PhotoNiagara Falls native Litha Portiaeyne Johnson, whose stage name is Portia, is playing Calpurnia alongside Jeff Daniels in “To Kill a Mockingbird” on Broadway.

Portia as Calpurnia, embraces Scout, played by Tony-winner Celia Keenan-Bolger, in “To Kill a Mockingbird,” on Broadway. Portia is the stage name of Litha Portiaeyne Johnson, who was born and raised in Niagara Falls.

Years back, when Litha Portiaeyne Johnson was in elementary school, her mother did not want her reading the book “To Kill a Mockingbird.”

Though it was a school assignment, both her mother, Mattie Lee Cox Johnson, and her grandmother, Litha Lee Cox, for whom the little girl was named, believed the acclaimed novel about a Black man wrongly convicted in the rape of a white woman was too real for their little girl.

“I thought she was too young to understand and I really wanted to not so much teach her as to let her live it. This way when she read it, she would understand it.”

So, Portia, as she’s been called since birth, didn’t read the book until she was in her twenties, and then she understood her mother and grandmother’s reluctance to have her read the story so young. “I have to say it was a bit traumatizing,” Portia said during a recent Zoom interview with the Niagara Gazette.

“It really hit home once I found out my grandfather’s back story,” she explained. ‘His brother just disappeared. He was accused of an act like this and just disappeared and never heard from again.”

It was one of the reasons that, even though she was working as a successful actress in Manhattan and directing and teaching acting students, she didn’t go to see the production of “To Kill a Mockingbird,” which opened on Broadway in 2018, adapted by acclaimed screenwriter Aaron Sorkin, writer of the hit TV series “The West Wing.”

Then, in 2020, due to the pandemic, Broadway went dark for many months. All plays ceased production until August, when there was talk of Broadway’s reopening, and Portia was excited to return to work.

Known professionally by just her first name, Portia had been working full-time as an actor since 2003. She performed on Broadway with Patrick Stewart in “The Ride Down Mt. Morgan,” and on stage and in the touring company of “Fences.” Prior to the COVID shutdown, she had a successful run with Marisa Tomei in the Tennessee Williams play “The Rose Tatoo.”

As Portia considered which productions she would seek to join when the stage lights came back on, she was asked to audition for the role of Calpurnia in “To Kill a Mockingbird.”

“Of all the plays that are going to be on Broadway, why this one?” she wondered.

“When I read the script that had been adapted by Aaron Sorkin, it hit me differently. Not that it wasn’t a hard story, but that he had developed the characters of Calpurnia and Tom (the accused) in a way I could lean into them. I could breathe into them.”

Portia said that while only a few cast members were rejoining the production, the whole cast, including Jeff Daniels as Atticus Finch and Tony-winner Celia Keenan-Bolger as Scout, went into rehearsals once more, which really helped her create her version of Calpurnia. “One of the things we kept doing was asking ourselves was ‘what story are we telling?’ “

Her unfolding of the role as housekeeper to Tom’s attorney, Atticus Finch, and co-parent to the Finch children, Scout and Jem, creates an emotional response to the story’s horrific racism and when Tom has been killed while trying to escape, Portia is able to show more of the relationship between Atticus and Calpernia than is revealed in the book or other productions.

She allows the audience to feel the injustice and the pain, and the audience responds with its own emotions and, on occasion, tears. As Calpurnia, Portia shines a stark light on the racism which continues to influence the country’s unease and the nation’s headlines to this day.

Her mother, Mattie, has not yet seen her daughter in the play, but plans to soon and is so very proud of her daughter’s success. Though “Mockingbird” is not Mattie’s favorite book, her favorite person is bringing an historic understanding to the character.

“The character she’s playing, it was sort of like what I grew up with with my grandmother,” explained Mattie, whose family came to Niagara Falls when she was four, after her father was drafted to work in the atomic bomb program at Carborundum.

“My grandmother was that type of servant in a home in Alabama when she was growing up,” Mattie said. “Now Portia is playing that, but she knows who that character is.”

It’s still not an easy role or an easy topic, but Portia said she has made the role her own.

“I’m building my legacy and when I look back on my body of work I want it to reflect the human that I am,” she said.

Born and raised in the city, she grew up on10th and Niagara streets, and after graduating from NFHS, attended Niagara University before graduating from Temple University and heading to Broadway to follow her dreams to become an actor. She is looking forward to coming home to see family and friends and participate in the reunion celebration, adding that “It’s lovely to reconnect with my old classmates.”

As she and members of the reunion committee are discussing how to create a scholarship and bring more arts to the city, Portia recalls with gratitude her mentors at Niagara Falls High School including Music Teacher Marva Frails, who also directed Portia in the chorus at her family’s church, New Hope Baptist Church.

Looking back, Portia knows how important the arts can be to a young person’s life.

“It’s what I was raised on. It gave me purpose and hope. And I want to do the same,” she said.

Her advice to young actors? “That it’s all possible. It begins and ends with you. It does, it really does.”