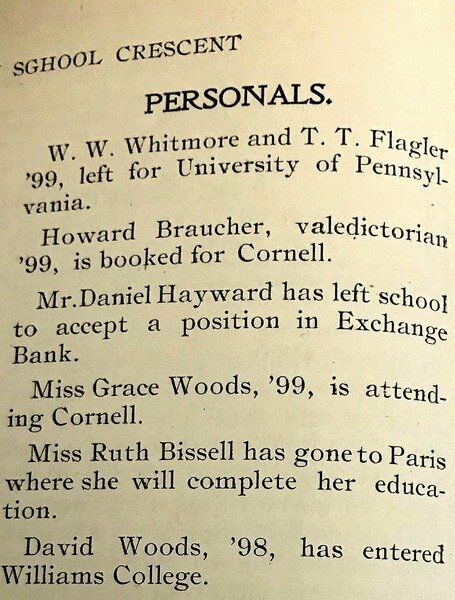 From the October 1899 issue of the Lockport High School Crescent, a magazine-style publication. 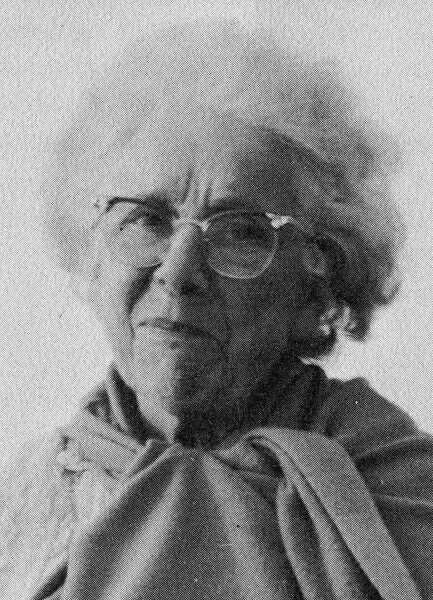 From the October 1899 issue of the Lockport High School Crescent, a magazine-style publication.

(AUTHOR'S NOTE: A package recently arrived at the History Center from Carol Harding of Manchester, Michigan, containing information on a Niagara County woman, Grace Woods, who was one of the first local female graduates of Cornell University. Carol was given the material by Grace’s daughter, Mary Casey, and wanted it donated to the History Center. The following article is based on the information she sent. I would like to thank Carol for sharing it and entrusting Grace’s story to the History Center.)

Grace Woods was born in North Hartland on August 6, 1880, the second child and eldest daughter of Robert Gow Woods and Estella Whitcomb Woods. The 1875 Niagara County Atlas shows a W. Wood on Bishop Road in North Hartland. This may have been the property of Robert’s father, William. There were Gows and Whitcombs nearby.

Grace had an older brother, Elwyn, and a younger sister, Edna, who died in 1888 at the age of 6. Another sister, Neva, was born in 1889. Shortly after Grace’s birth, the Woods family moved to 16 Griffin St. (later renamed Franklin Street) in Lockport. Over the next 20 years, the family moved between Lockport, North Hartland and West Somerset, probably staying with relatives. Grace and her siblings attended Lockport schools, most likely the Walnut Street School, and later Lockport High School.

The 1890s were a difficult time for the Woods family. Grace's father Robert, a Niagara County school commissioner, was involved in a hotly contested election for that position in 1893, and in 1898, her brother Elwyn enlisted in the U. S. Army to fight in Cuba during the Spanish-American War. He was wounded during the Battle of San Juan Hill and for weeks there were conflicting reports as to his fate. Robert Woods went to the 13th Regiments’ camp on Long Island to learn the fate of his son, but nothing could be confirmed. In April of 1899, a body was shipped to Lockport for burial but it turned out to be that of a soldier from Rochester whose last name was also Woods. There is a stone for him in the family plot in West Somerset Cemetery and for many years he was honored among the fallen soldiers who are buried elsewhere.

Amid the trauma of losing her brother, Grace graduated from the Lockport High School on East Avenue in 1899 near the top of her class and was awarded a state scholarship to attend Cornell University in the fall. She was the only girl from Lockport to attend college that year. Upon admission, it was required that Grace give a middle name and she chose “Maude.” At that time, some women were not given middle names at birth because it was assumed that upon marriage, they would use their maiden name as their middle name. While at Cornell, Grace studied languages as well as the sciences, which included a Biology-Geology Camp during the summer of 1901

Also in 1901 Grace met her future husband, Louis C. Karpinski, (B.A., Cornell, class of 1901). In January 1903, the city of Ithaca experienced a typhoid epidemic that lasted through May. During those months, 1,350 city residents, including 291 Cornell students, contracted the illness. Before it was over, 82 people died including 29 Cornell students, five of them women. There is no indication that Grace Woods was affected by the outbreak but it was reported that many students returned home during the height of the illness. Despite the crisis, Grace graduated with a B.A. in Arts that year. In the fall, she taught languages and sciences for one year at the high school in Bound Brook, New Jersey.

Louis C. Karpinski was the son of Polish and German immigrants who had a cleaning and dye business in Oswego. After graduating from Cornell, Karpinski earned his doctorate at the University of Strassburg, studying mathematics, physics and chemistry. Upon his return, he taught for one year at the Oswego Normal School before accepting a position as instructor of mathematics at the University of Michigan at Ann Arbor in 1904.

On April 20, 1905, Grace and Louis were married in her parents’ home on Griffin (Franklin) Street. After visiting several western states, the couple returned to Ann Arbor to take up residence in that city. Between 1906 and 1921, the Karpinskis had six children, three boys and three girls. In 1919, Louis was appointed to a full professorship at U of M. Grace and Louis were progressive parents who believed in immersive education and raised their children to be multi-cultural and multi-lingual. Summers were often spent in Europe, particularly in France, where the children lived with French families while their father studied and taught at various universities. All of the children attended college, two earned doctorates and all, at one time or another, taught classes at the high school or college level.

Grace embraced activities in her community and at the university. In Ann Arbor, she served on the board of the Congregational Church, the YWCA and the Dunbar Center, a community-based organization that assisted Black residents and U of M students with housing and other social service issues. She was also an active member of the American Association of University Women and the Cornell University Alumni Association.

Upon Louis’ retirement in 1948, the Karpinskis wintered in Florida. Louis died there in 1956. Grace passed away in Ann Arbor in 1962. Later that year, the Karpinski children established a scholarship fund in their parents’ names. It does not appear that the scholarship is still active.