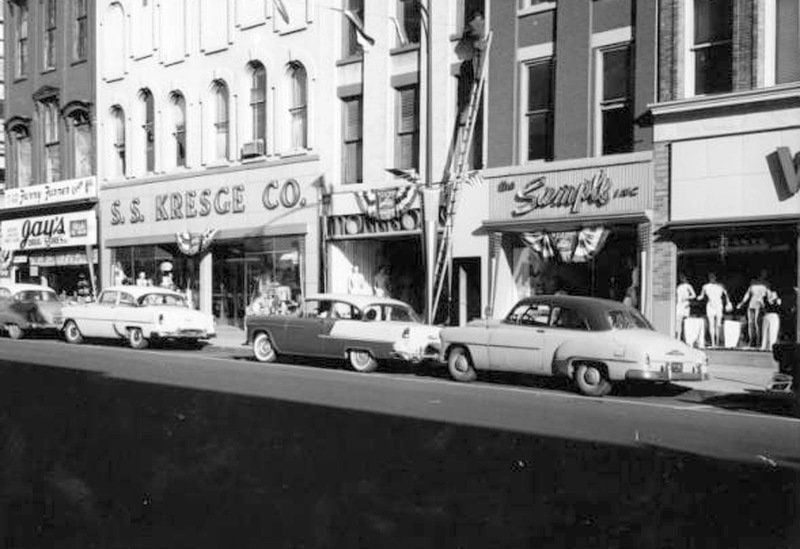 COURTESY NIAGARA HISTORY CENTERThis photograph was published in the August 1934 issue of The Grant Game, A Magazine for Grant Men and Women. Tucked into an article titled "The All Buffalo Picnic," the caption read: "Heard from Niagara Falls: 'Look at our happy smiles — just finished eating a tasty luncheon prepared by Miss Davies. In another two minutes we'll be off to Crystal Beach with all the Grant stores of Buffalo and its vicinity."

COURTESY NIAGARA HISTORY CENTERThis photograph was published in the August 1934 issue of The Grant Game, A Magazine for Grant Men and Women. Tucked into an article titled "The All Buffalo Picnic," the caption read: "Heard from Niagara Falls: 'Look at our happy smiles — just finished eating a tasty luncheon prepared by Miss Davies. In another two minutes we'll be off to Crystal Beach with all the Grant stores of Buffalo and its vicinity."

Last week Niagara Discoveries focused on two five-and-dime stores, Woolworth’s and Newberry’s, which existed in both Lockport and Niagara Falls until economic and demographic changes caused their closing in the 1960s and 1970s. Today, let's look in on other stores, Kresge’s and Grant’s.

Sebastian Spering Kresge, born in Allentown, Pa., in 1867, opened his first store with a partner in 1899 and in 1912 he incorporated the S.S. Kresge Co. Like Woolworth’s, Kresge’s started out as a Five-and-Ten Cent store but gradually raised prices.

The Lockport Kresge’s at 102-104 Main St. opened in 1912. A Kresge’s opened in Niagara Falls in 1925 at 1914-1916 Main St. (the building still exists and the word “Kresge” can still be seen). Kresge stores, along with Woolworth’s, Grant’s and Newberry’s, were a mainstay in most cities in the early to mid-20th century, with some places (like Lockport and Niagara Falls) having all four stores operating at the same time.

In the 1960s, S.S. Kresge Co. had begun to change its focus from small stores in urban centers to larger stores in the suburbs to follow the shoppers who were moving out to these areas. The first of these new Kmart stores opened in 1962. In 1966, Kresge stores in some locations, including Lockport and Niagara Falls, became Jupiter Stores, which were considered even more discount than their predecessors.

This was also the same year that founder S.S. Kresge died at the age of 99. The Jupiter store in Lockport continued at 102 Main St. until the building was taken for urban renewal in 1975. The Niagara Falls Jupiter store at 1914 Main St. hung on until 1987 when all remaining Kresge and Jupiter stores were bought out by McCrory’s and closed.

Grant’s offered a bigger variety of merchandise and despite higher prices was still considered a discount store. In the 1920s, ads in the Niagara Falls Gazette sought a “Young Man” with “experience in RADIO” and an “Experienced Milliner.” The company published “The Grant Game, A Magazine for Grant Men and Women” that contained news about the franchise, events and employees. The History Center has in its collection an issue from August 1934. One of the articles, “The All Buffalo Picnic,” described the annual gathering of employees from stores in the Buffalo region.

The picnic took place at Crystal Beach with various competitions taking place. Among the winners and runners-up of the various contests were: Stewart Hart of Niagara Falls, who with a partner from a Buffalo store, won the Three-Legged Race; Mrs. Updegrove of Lockport took second place in the Rolling Pin Throwing contest; and Grace Zinter of Niagara Falls came in second in the girls’ Horse Race. Following a chicken dinner at Laube’s Midway Restaurant, the Grant’s party entered the park for an evening of dancing, roller skating and riding the Cyclone Roller Coaster.

In February 1936, a fire destroyed the Grant’s store in Niagara Falls. This was the fire that killed two upstairs tenants. The store reopened at the same location and remained there until 1970, when it moved out to 2390 Military Road (now Big Lots Plaza) until the company went out of business in 1976 and all the stores closed.

Although Grant’s had 1,200 stores and was doing $2 billion in sales in the early 1970s, three factors caused its demise: failure to adapt to changing shopping habits; tight control by the corporate directors without shareholder input; and aggressively pushing store credit cards and approving everyone who applied regardless of their financial situation. The downward spiral had begun after W. T. Grant’s death in 1972 at the age of 96.

CORRECTION: Last week’s Niagara Discoveries stated the fire at J. J. Newberry’s in Lockport was in 1936; it was in 1935. Also, there was no loss of life in that fire as indicated in the article. The author apologizes for the incorrect information.