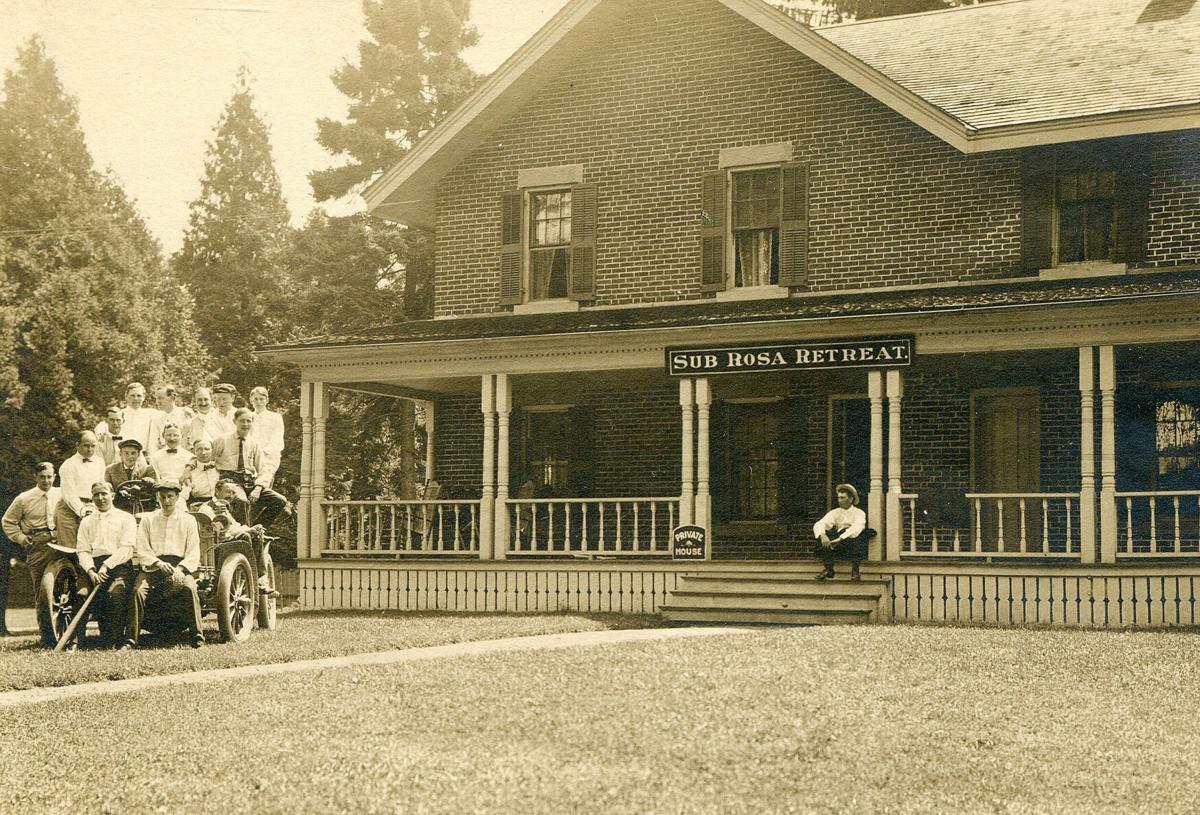 Sub Rosa Retreat was the name given to the Lockport Wheelmen Club's secondary clubhouse in Olcott circa 1905. 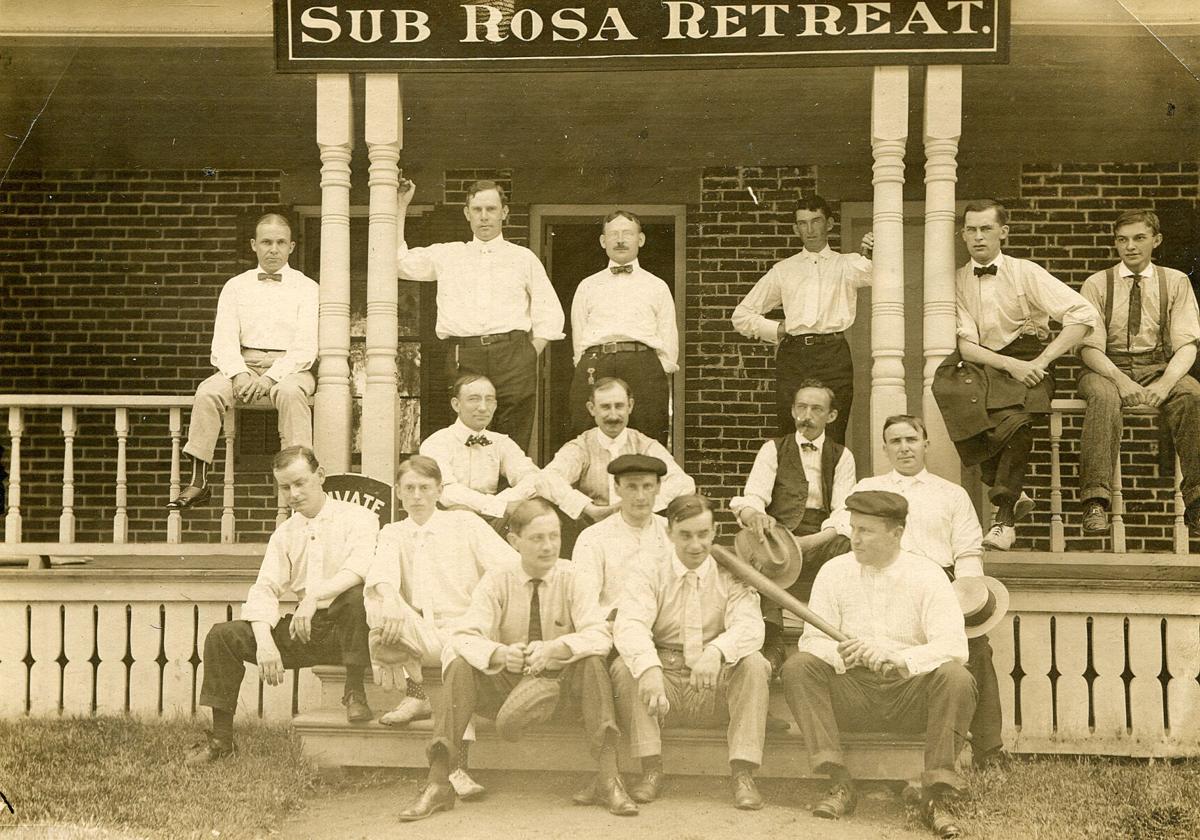 The Lockport Wheelmen were a bicycle club, founded in 1886, that held races and excursions all over Niagara County. In 1911, as interest in cycling began to decline, the organization became more of a social club and its name was changed to the Tuscarora Club.

Sub Rosa Retreat was the name given to the Lockport Wheelmen Club's secondary clubhouse in Olcott circa 1905.

The Lockport Wheelmen were a bicycle club, founded in 1886, that held races and excursions all over Niagara County. In 1911, as interest in cycling began to decline, the organization became more of a social club and its name was changed to the Tuscarora Club.

It’s always enlightening to periodically go through the photo collection here at the History Center because no matter how many times you look at the images, you always find something you didn’t catch before. That is how photos of the Sub Rosa Retreat came to the surface. With no information provided with the photos, a search was begun to learn where, when and what it was. A quick check of a newspaper website turned up just one article but that opened the door to the “rest of the story.”

That article appeared in several newspapers in August 1905 and related an amusing story in which the Sub Rosa Retreat was mentioned as “the wheelmen’s summer home in Olcott Beach Grove.” It is the only time it is referred to by that name in the newspapers. Newfane Board of Supervisors Clerk Fred H. Krull happened to be at the clubhouse when a man brought his wife there after she had suddenly taken ill. Krull, though not a doctor, suggested she take quinine and “the woman was soon herself.” Following this, Krull was referred to as “doctor” when he was at the club.

The Lockport Wheelmen were a bicycle club whose primary clubhouse was on Walnut Street. The club was founded in 1886 and held races and excursions all over the county. In 1911, as interest in cycling began to decline, the organization became more of a social club and purchased the spacious Evans house across Walnut Street from its former headquarters. The name was then changed to the Tuscarora Club.

Several stories can be told regarding the clubhouse in Olcott. First, the term “sub rosa” literally means “under the rose” or something done in secret. This was certainly used tongue-in-cheek by the Wheelmen, as the clubhouse was a large brick structure in the middle of a park with the name prominently displayed in front. The Wheelmen leased the old house in June 1905, most likely from the International Railway Company, which had purchased the Pine Grove lakefront property a few years before. The Niagara Falls Gazette of June 2, 1905, described the retreat this way: “The spacious summer home of the Wheelmen is situated in an ideal spot. It will be fitted up with sleeping rooms. On the lower floor one large parlor or lounging room will be fitted up.”

Cycling was not the only pastime of the club. Another newspaper reported that a planned baseball game “did not come off, the Wheelmen contenting themselves with quieter and less strenuous lines of sport.” However, a dance held later that evening in the Olcott Beach hotel casino “proved [to be] the biggest affair that has ever been held there.” The club made $300 profit.

Since little is written about the clubhouse after the 1905 season, it is unclear how many summers the Wheelmen used the Sub Rosa Retreat.

The house used as the retreat had a 50-year history before the Wheelmen took it over. It was built in 1854 by Jacob Albright, one of the earliest settlers in Olcott, who came with his wife and young daughter in 1810.

In December 1813, after the British had captured Fort Niagara and were moving east along the lake toward Van Horn’s Mill on Eighteen Mile Creek, Albright left his wife, daughter and 1-year-old son to go to a neighbor to learn more about the approaching soldiers. While he was gone, a messenger came and told Mrs. Albright to flee with the children.

Struggling to carry them in the snow, she left the four-year old girl under a large tree and covered her with leaves, instructing her not to make a sound unless called by her own name.

A short time later, Mrs. Albright met her husband returning from the neighbors. He went on ahead to retrieve his daughter and to test her, made sounds but did not call her name. She did not make a sound until her father called her by name.

The family returned to their cabin west of the creek after being informed that the British would be going no further west after burning the grist mill.

Albright later built a saw-mill on the creek and was appointed to several civic posts in the town and village. He and his wife had nine more children. His primary occupation was farming and his property included part of what is today Krull Park.

In 1854, at the age of 68, Albright built the brick house that was later the Sub Rosa Retreat as well as the Albright Hotel, which was in operation until about 1931 when it was torn down. Albright died in 1859. After his death, the house had several owners until acquired by the I.R.C.

The house remained vacant in the park for many years until being razed in 1937 in anticipation of Niagara County taking over the property after Fred H. Krull purchased it from the I.R.C. and donated it for use as a county park.