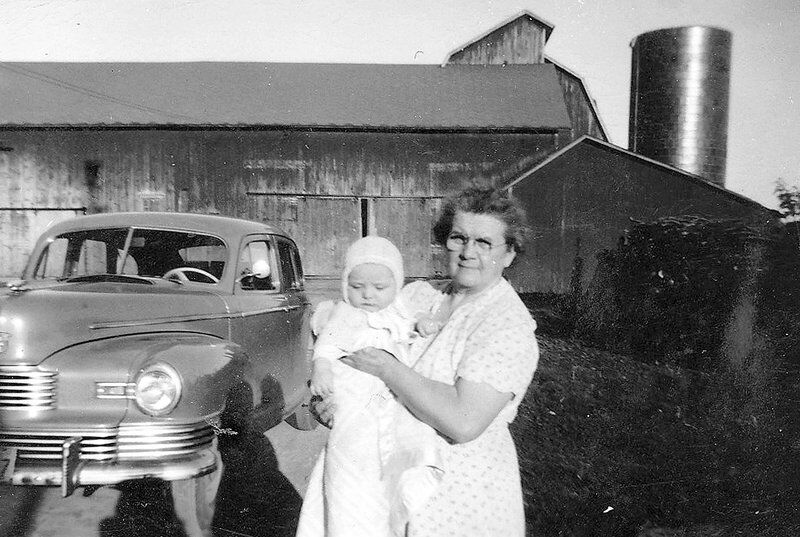 Matilda Prahler holds a baby, probably a grandchild, while her photograph is taken on the Prahler family farm, on Transit Road north of Robinson Road, in the 1940s. The barn behind Mrs. Prahler is still standing today. 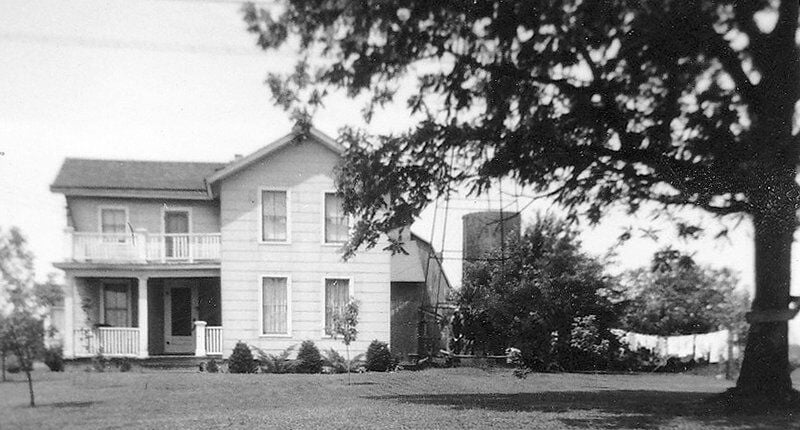 COURTESY PRAHLER FAMILYThe Prahler homestead on Transit Road north of Robinson Road in 1954. The house was eventually demolished to make way for commercial development on the old Prahler farm.

Matilda Prahler holds a baby, probably a grandchild, while her photograph is taken on the Prahler family farm, on Transit Road north of Robinson Road, in the 1940s. The barn behind Mrs. Prahler is still standing today.

COURTESY PRAHLER FAMILYThe Prahler homestead on Transit Road north of Robinson Road in 1954. The house was eventually demolished to make way for commercial development on the old Prahler farm.

Last week, Niagara Discoveries looked at the property history of the old barn still standing on Transit Road in the town of Lockport. After being owned by two previous longtime owners, John Stahl (c.1830 to c.1872) and John Donner (c.1872 to c.1912), the property was purchased by Henry Prahler in 1913.

Henry Prahler was born in Germany in 1876 and came to the United States in 1893 and settled in Webster, NY. He was still living in Webster in 1910, but had already established a fruit evaporator and packing house in Sanborn before 1908. Forest Street in that village was originally Prahler Avenue. Prahler traveled between Webster and Sanborn until he married Matilda Oster in Rochester in 1913 and made Lockport his permanent home. His Sanborn buildings burned down in 1917 and he then concentrated all his efforts on his town of Lockport property.

The Prahlers had six children, two sons and four daughters. Henry was very proud of his orchards and the size of his apples trees. His daughter Ruth remembers that in addition to apples, her father grew cherries, wheat, oats, barley and field corn. In the barn were the hay mow, two horses, various other animals and a cutter sleigh. Prahler was very handy with tools and when he wasn’t satisfied with a commercial farm implement, he built his own. He also constructed the cement block smokehouse that is still on the property.

The Prahlers were involved with the founding of the South Lockport Fire Department and were active in that organization until their deaths. A somewhat humorous event occurred in 1952. A commercial billboard was put up on the farm just north of the Prahlers but very close to their property line. One source says it was advertising beer. Henry Prahler built a screen on his property in front of the sign to block it. The sign company then covered the original sign with another that read, “Go to Church Sunday.” Prahler refused to take the screen down unless the sign company did the same. His grievance was that the sign was violating a town ordinance. Eventually the sign and the screen came down.

Henry died in 1961 and Matilda died 10 years later. Both are buried in St. Mary’s Cemetery. Their son, Henry Prahler, Jr. had died in 1954 and son Bernard (“Red”) inherited the farm and worked it part-time while also employed at Harrison Radiator.

Over the years, the property to the north and south of the barn was sold and commercially developed. With the constant progress along Transit Road, the house and other buildings on the property gradually came down, leaving only the barn that is still standing. Bernard Prahler died in 2013 and a year later the property was sold to a business entity.

I would again like to thank Jean Linn, Town of Lockport Historian, and Judy Naylor, Henry Prahler’s granddaughter, for assistance with this article. Judy’s mother, Ruth Prahler Naylor, is the last surviving child of Henry and Matilda Prahler. The accompanying photos are from the Prahler family.

Her family’s farm was also on Transit but further south on the opposite side the road at the corner of Rapids Roads (where the Auto Store car dealership is now). There were eleven Donner siblings and many of them owned property on “the Transit” that in turn was passed on to their descendants. On the 1938 Niagara Frontier Planning Map there are no fewer than eight Donners on both sides of Transit Road. She said one of the houses was so large that they referred to it as the “Donner Hotel” even though it was a private residence but that family had many children so needed a large house. Unfortunately, many of these houses are gone but it would make an interesting drive to see which, if any, are still there.