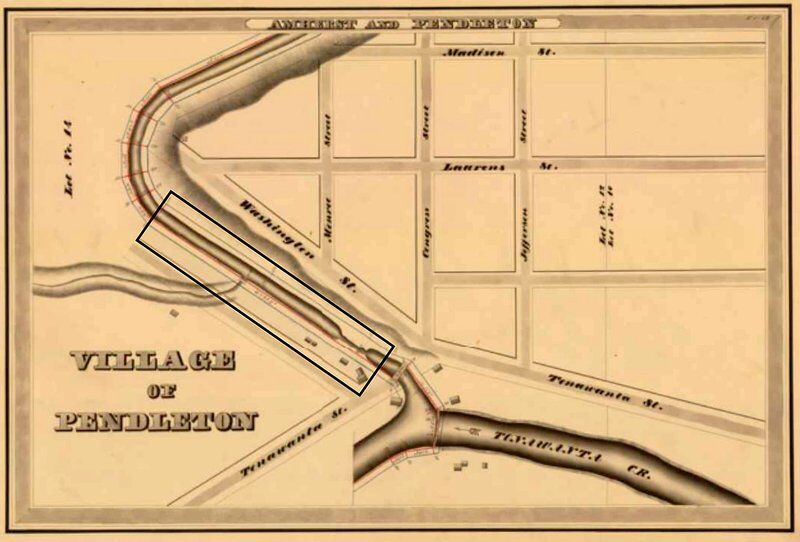 A map of Pendleton Village in 1832 courtesy of Jim Sobczyk. The rectangle on the lower left quad highlights the location of a paved bike path in 2021. 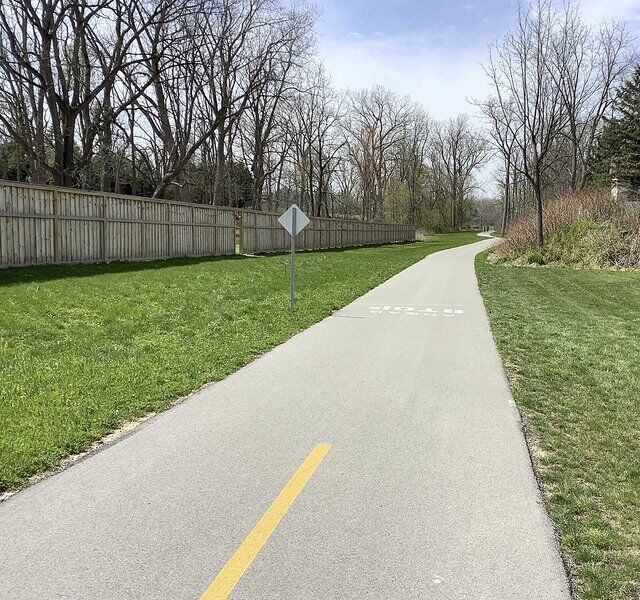 This bike path in Pendleton runs through the old bed of the Erie Canal. (Ann Marie Linnabery / contributor)

A map of Pendleton Village in 1832 courtesy of Jim Sobczyk. The rectangle on the lower left quad highlights the location of a paved bike path in 2021.

This bike path in Pendleton runs through the old bed of the Erie Canal. (Ann Marie Linnabery / contributor)

(AUTHOR’S NOTE: Material for this article was supplied by Jim Sobczyk and was written by his father, the late Ben Sobczyk, former Pendleton town historian. Portions are in Ben’s words. Jim requested an article about the history of Pendleton and I want to thank him for sharing this history with us.)

The story of the development of the town of Pendleton begins with its founder, Sylvester Pendleton Clarke. Before arriving there in the summer of 1821, Clarke was influential in another Western New York settlement, which will be briefly outlined here.

Prior to 1822, the ownership of Grand Island, though claimed by New York State, was in dispute until the boundary between the U.S. and Canada was set as the west branch of the Niagara River, placing the island in U.S. territory. After the end of the War of 1812 in 1815, but before the boundary was set, some adventurous people crossed the river and settled on the island. Cabins were built, land was cleared and farms were established.

One of those who made this journey was Sylvester Pendleton Clarke, who proclaimed himself “Governor of Grand Island.” The problem was that none of these people owned the land they lived and worked on, so they were squatters. Not only that, they were cutting down the valuable timber on the island with impunity, which angered the nearby residents of Buffalo who asked the New York State Legislature to order their eviction, which was carried out in December 1819.

The squatters had the choice of going to Canada or the U.S., and all but the Clarkes went to Canada. When they left, they went to the banks of Tonawanda Creek in southern Niagara County to start a new settlement there.

After his eviction from Grand Island in December of 1819, Sylvester Pendleton Clarke, immediately put into action plans for a new venture. He had helped survey the route of the proposed Erie Canal a few years before, and now chose to establish a community that would make use of that proposed waterway and the timber of heavily forested Western New York. In 1821, he purchased 132 acres in what was then the town of Niagara, from the Holland Land Company for $660. Clarke settled on the site where the new Erie Canal would merge with Tonawanda Creek and built a log tavern there. He named the area Pendleton Village.

The uncompleted canal that cut through the Niagara Escarpment between Pendleton Village and Lockport, created a land portage so that goods and people had to be carried between both points until the canal cut was completed. The portage at this junction with Tonawanda Creek drew together the nucleus of a village. The first log tavern was superseded by a frame structure in 1822. A few years later Clarke increased his holdings to about 200 acres or practically the whole site of the present Village of Pendleton.

Originally, the Erie Canal met Tonawanda Creek farther east than it does today, about where East Canal Road (Congress Street) in the Village of Pendleton meets the bridge that crosses to New Road in Amherst. Standing at the rear of Uncle G’S Ice Cream Store on East Canal Road today and looking west across a wide, gentle gully which follows the route of the old Erie Canal [a bike path has since been built through the old Erie Canal channel], one is able to locate where Clarke erected a log tavern in 1821 on today’s North Tonawanda Creek Road.

From the time of the canal’s opening in 1825, Clarke’s hotel served as a ticket office for the packet boats that carried passengers along that famous waterway, and reportedly, large barns nearby stabled the canal horses that were interchanged there. By 1839, according to one account, Mrs. Clarke presided over a kitchen where a barrel of flour a day was used in preparing meals for the busy hotel that fed hundreds of travelers in the 1830s. Clarke’s second wife, the former Lucy Wakefield, appears to have been a remarkable woman in her own right, not only presiding in the hotel kitchen but also giving birth to 15 of Clarke’s 19 children.

His village never became the busy metropolis he had envisioned, although it became for a time a thriving canal village from which timber from nearby forests was successfully shipped. By the time of Clarke’s death in 1854, the village “had begun to decline, due to the waning supply of timber.” Today the Village of Pendleton is a tiny “crossroads.”

The Clarke family cemetery, rededicated in 1973, sets back from Monroe Street which ends abruptly and somewhat eerily, becoming a dirt lane that soon disappears from view. As soon as spring fills out the wooded area surrounding it, the burial ground won’t be visible from the road.

At various times during his lifetime, Sylvester Pendleton Clarke was a surveyor, “governor” of Grand Island, a hotel keeper, ticket agent, school teacher, and real estate agent. The Town of Pendleton, established in 1827, was named after the village which was named after him. Nobody’s fool and definitely a wise man, Clarke never pretended to perfection. Thus, he wrote in his Journal, “If the Best Man’s faults were written on his forehead, it would make him pull his hat over his eyes.”