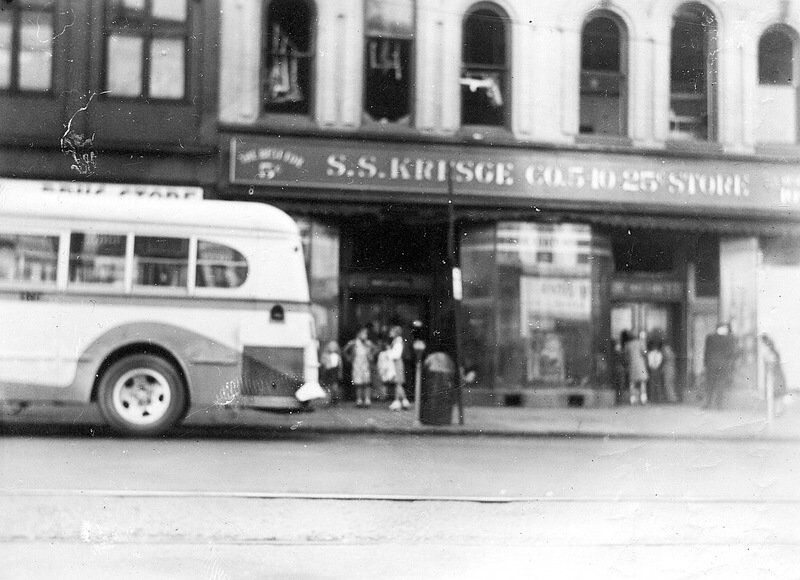 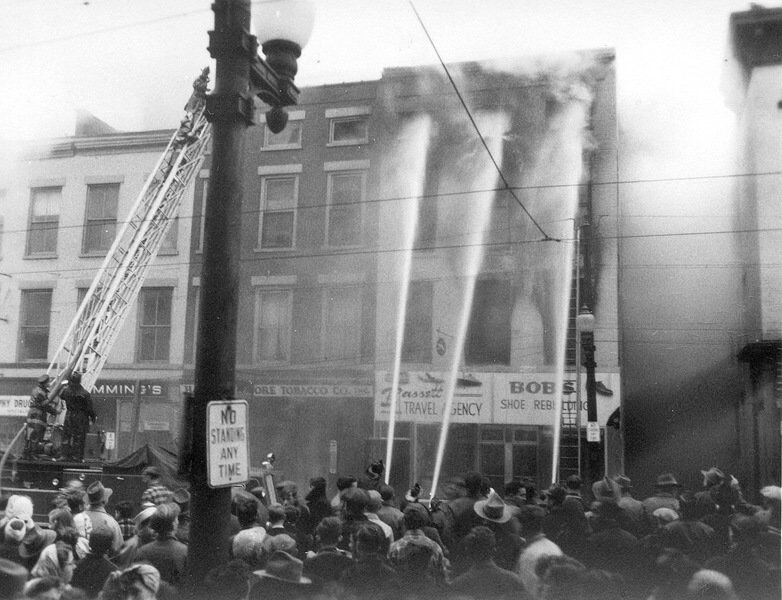 The nearly century-old retail-office building at 29 Main St., Lockport, caught fire on Nov. 12, 1949. The effort to knock out a Saturday morning blaze on bustling Main Street was witnessed by hundreds of people.

The nearly century-old retail-office building at 29 Main St., Lockport, caught fire on Nov. 12, 1949. The effort to knock out a Saturday morning blaze on bustling Main Street was witnessed by hundreds of people.

Niagara Discoveries has looked in on a number of fires in Lockport over the years. The Great Fire of 1854, though catastrophic for the community at that time, has very little relevance to people today. The 1928 Hodge Opera House fire is remembered by few, if any, people living today but continues in the collective memory of contemporary residents through stories told by parents and other relatives, and through photos of the ice-encrusted structure that are still found in old family albums. Fires seem to attract people’s interest and attention, and even in earlier times when everyone did not have a camera in their pocket or purse, people would make it a point to photograph these events. Seeing these photos again might spark (excuse the pun) people’s memories and they may recall stories or details that have been long forgotten.

A recent donation of several photos included a few taken during two fires in the 1940s. One occurred at a popular and well-patronized store, the other at a building that housed multiple small businesses.

At about 10 p.m. on Sept. 21, 1946, a fire was discovered in the basement of the S. S. Kresge store at 102 Main Street near Locust Street. When the firemen tried to enter the basement, they were driven back by heavy smoke. Chopping holes in the first floor to put water on the fire did not stop it and eventually the flames reached up to the third floor. Several nearby stores were damaged, mainly from smoke and water, including well-known Lockport businesses such as Jay’s Drug Store, Morrison’s Women’s Apparel Shop, LeBar’s Jewelry Store, The Hosiery Box, Will’s Paint and Paper Store and Robinson’s Meat Market.

The cause of the fire was not determined but it started in the rear basement where the china and crockery were stored. Store manager Arthur Jackson emphasized that “no smoking is permitted in the building at any time,” which for that era was unusual. A minor fire, also in the basement, had occurred the previous May but had been extinguished right away. The brick building, erected in 1868, was known as the Hibbard Building. Kresge’s had been in there since 1912 (previously, Jenss Department Store was there from 1895 until 1911, when Jenss moved to 128 Main St.).

After the fire, a decision had to be made whether to rebuild within the existing but damaged structure or raze the building and build a new one. Most favored a new building, but with the construction boom underway following World War II causing a shortage of materials, the old building was retained. A new roof was put on and the interior was completely rebuilt with extra supports for the first floor (the original floor had collapsed into the basement). A second floor was included but the interior third floor was not rebuilt.

On Feb. 21, 1947, just five months after the fire, the S. S. Kresge store reopened its doors to the public. The store remained in business until 1966 when it became the Jupiter Store. That store closed in 1975 and the 107-year-old building at 102 Main St. was torn down for urban renewal.

Two of the donated photos depict the fire that occurred at 29 Main St. on November 12, 1949. Though the businesses affected were smaller in size and had less customer traffic than Kresge’s, the fire itself was more dramatic for a couple of reasons. First, it happened at 10:30 a.m. on a Saturday, a popular shopping time in Lockport when many people would have been out on Main Street. Second, people were actually in the building when the fire started.

The businesses at 29 Main St. were the Bassett Travel Agency, Bob’s Shoe Repair Store and the Greyhound Bus Station office. The second floor, where the fire started, contained offices, and the third floor housed Club 50, described as a social and athletic organization. A children’s dance class was being conducted by Ethel Costello and her son Jack in the Club 50 rooms on the third floor. When they heard an explosion on the second floor, the Costellos calmly led the 18 children down the stairs and out of the building to safety (first reports said there were 100 children attending the class).

Businesses and apartments on either side of the building were also evacuated. These included Moore’s Tobacco Store, Burhans Motor Express Co. and Herco Furniture Co., all of which suffered smoke and water damage. One invalid tenant had to be carried out of 27 Main St. by two policemen. The crowd watching the fire was estimated to be in the hundreds.

The fire started when a second floor office tenant tried to loosen a piece of furniture that had been bolted down using a blowtorch that exploded without warning. The explosion blew out several windows and immediately started the fire.

The building was repaired and remodeled and two years later became home to the Lockport Savings & Loan Association until the whole block was demolished in 1966 to make way for Lockview Plaza.

The building at 29 Main Street had been built in the 1850s and at the time of the fire was owned by the City of Lockport. It had been deeded to the city in 1939 by Dr. Samuel Outwater with the stipulation that the income generated by the building would be used to help maintain Outwater Memorial Park. Dr. Outwater later bequeathed his property at 215 Niagara Street to the Niagara County Historical Society for its permanent museum.