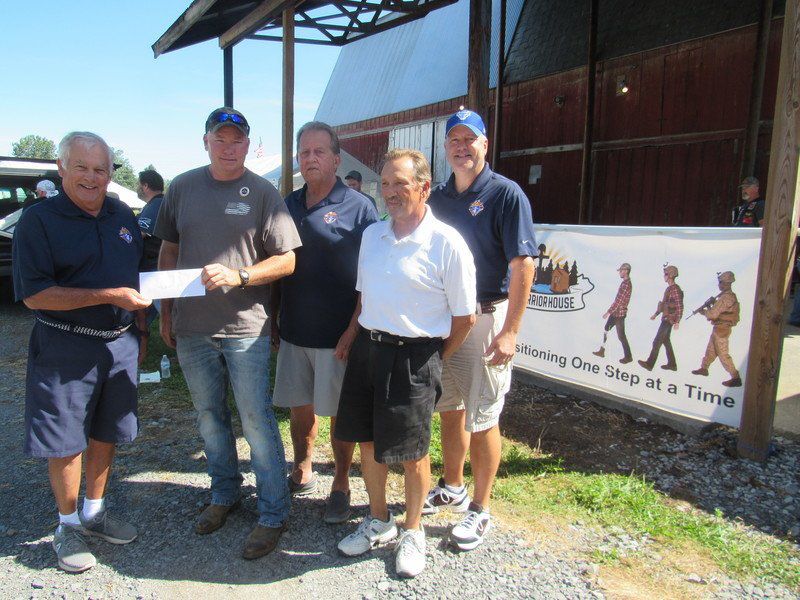 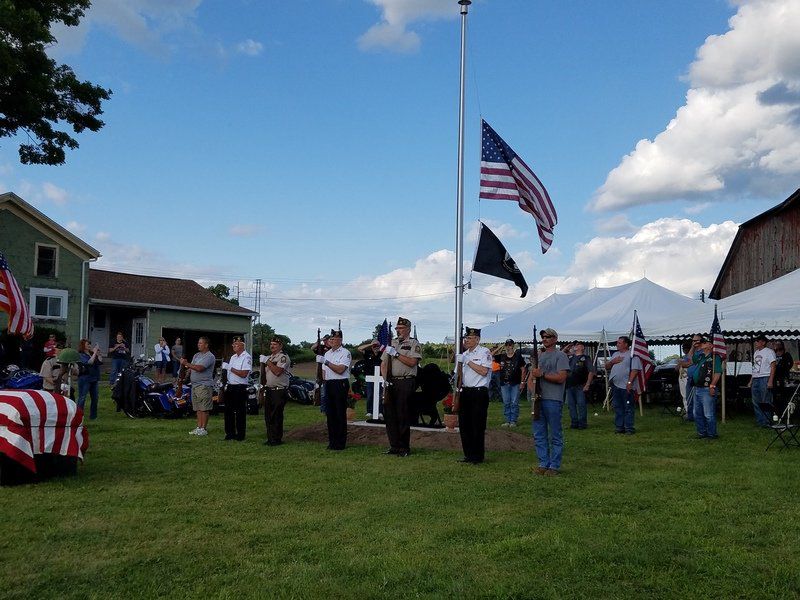 Members of the American Legion and VFW in Medina dedicated a new flag pole with American, POW and MIA flags at the Warrior House on Salt Works Road Saturday afternoon, concluding a fundraiser which raised more than $20,000. (Photo by Diana Anderson)

Members of the American Legion and VFW in Medina dedicated a new flag pole with American, POW and MIA flags at the Warrior House on Salt Works Road Saturday afternoon, concluding a fundraiser which raised more than $20,000. (Photo by Diana Anderson)

MEDINA – If this year’s Knights of Columbus golf tournament was a resounding success, it had a lot to do with the charity to which they decided to donate the proceeds.

It was the idea of Archie Washak, a Vietnam veteran, to make a donation to the Warrior House, a retreat for veterans established on Salt Works Road in 2015. Because the proceeds were going to support veterans, golfers who won prizes in the tournament donated the money back to the Knights, which resulted in nearly doubling the amount of the proceeds.

On Saturday morning, the Knights presented the Warrior House with a check for $1,260.

The Warrior House came into existence after the farmhouse and land had been purchased by Pete Zeliff Jr., who had no use for the home. Through his church he met Ed Spence of Oakfield, who was the Western New York head of Operation Injured Soldier, and Zeliff offered to donate the house as a weekend retreat for veterans.

Several times a year veterans come from across the country to spend a few days and hunt or fish. Due to support from the local community, a fundraising gun raffle in the fall and the giant event which took place Saturday, the Warrior House has been able to do much more for veterans.

Two years ago, Todd Wilcox of Medina came up with the idea of a fundraiser to support the Warrior House. It was supposed to be a dice run for 30 or 40 bikes, he said. His wife Beverly decided they should have a basket raffle and set out to secure a few. This year, the basket raffle, coordinated by Diane Kephart of Medina, had more than 300 baskets and gift certificates, in addition to dozens of “big ticket” items. These included a fire ring and picnic table donated by BOCES, five weapons and a hand-crocheted blanket with an American flag and soldiers.

Support for the event has grown every year, and the third one which took place on Saturday is expected to raise more than $20,000.

This money and donations such as that from the Knights of Columbus will allow the Warrior House to expand its services for veterans, by launching a new program featuring more events for veterans and their families, Zeliff said. This program will be headed by Catherine Schmidt of Albion.

They already provide hunting and fishing weekends, help with fuel costs for veterans and Christmas for needy veterans and their families, said Dan Anderson, commander of the VFW in Medina.

A highlight of Saturday’s event was dedication of a new flagpole and steel monument donated by BOCES students. It depicts a metal soldier, rifle on his shoulder, kneeling in front of a cross. The dedication ceremony including raising of new American, POW and MIA flags by members of the Medina American Legion and VFW. This was followed by singing of the National Anthem, playing of Taps, a 21-gun salute by the Veterans’ Honor Guard and displaying of a flag-draped casket.

Support for the fundraiser this year not only came from veterans’ groups and auxiliary in Medina, but from the Patriot Guard Riders, led by ride captain Joe Joyce of East Pembroke; ABATE riders; Harley Davidson dealers from several states; Bad Ash Barbecue, who loaned their food trailer; M&T Heating in Albion; Mark Zacher of Zacher Construction, who laid out the ground work for the new flag pole; Oak Orchard Concrete, who donated the concrete; and BOCES, whose students fabricated the steel design.