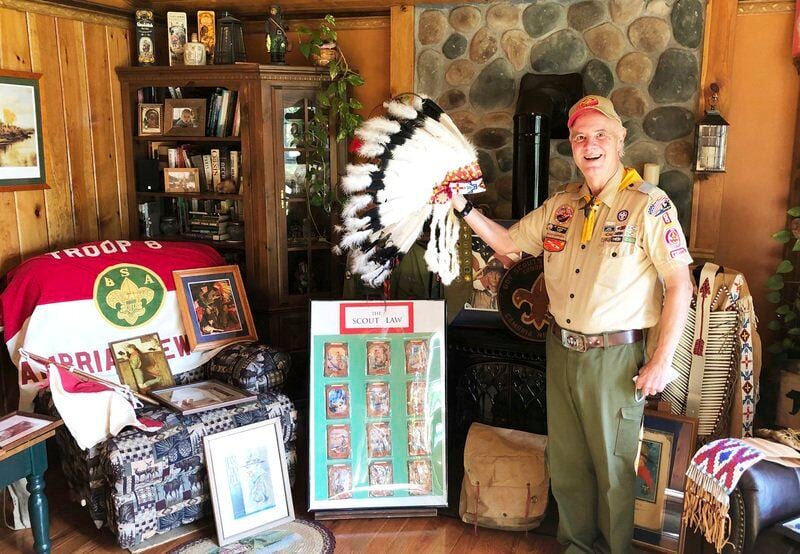 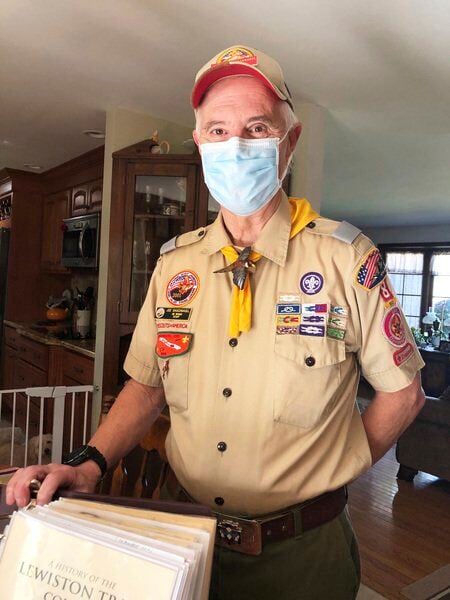 Joe Baschnagel collects and preserves artifacts that date back to the first days of local scouting in Western New York.

Joe Baschnagel collects and preserves artifacts that date back to the first days of local scouting in Western New York.

“I started in scouting when I was eight. My father was my scoutmaster and I’m an Eagle Scout, as are my two sons, and a scout master, so I guess you could say we have scouting in our blood,” Baschnagel said.

Together with his wife, Maureen, the Baschnagels raised three children, Joe, Andrew and Joelle, in the house that they built on Lower Mountain Road.

“My dad was my scout leader. He had been involved in scouts as a boy,” Baschnagel said. “He was the oldest (sibling) and his dad died when he was seven. He belonged to St. Ann’s church (501 Emslie St.) off broadway in the German section of Buffalo. They didn’t have a father, so they latched onto a boy scout troop. He used to tell me stories how they’d take the bus to the city line and then hike to a camp in Hamburg.

“I started collecting things right away and over the years, I’ve developed quite a love of scout memorabilia and scout history,” Baschnagel said.

“I’d love to get my story out to the people who live in the area, so if they have any stories to share or old uniforms, patches etc. Anything of scouting interest I’m interested in.”

One of the major obstacles in Joe’s life has been his family’s heart history.

“My dad died at 54 and his dad died at 35, so heart problems ran in the family,” he said. “Nine years ago I got a heart transplant at Cleveland Clinic. I had to stop working. Thankfully, my two sons haven’t had those kinds of problems.”

Baschnagel first became a scouting adult leader in Cheektowaga back in the early 1970s while he was helping out his father. He’s been with Troop 8 at the Cambria Fire Hall since the 1980s, eventually became a fireman and now serves as director of the fire hall.

The Iroquois Trail Council’s perennially-biggest troop, Cambria Troop 8 — attracting scouts from Cambria, Newfane, Wilson, Ransomville, Niagara-Wheatfield, Starpoint and Lockport — averages 40 to 50 boys each year, Baschnagel said, adding, “We have great parent partnership, which is essential.” Scouts meet once a week throughout the school calendar year, generally for about two hours.

“My biggest fear is that people, when cleaning out their attics or homes will toss out old Uncle Charlie’s box of scout stuff. Once it’s tossed it’s gone and along with it, a part of history,” he said.

Among the artifacts Baschnagel proudly displayed include an indian vest his father made, an indian headdress he made out of turkey feathers, wood carved troop signs, a bugle used for revelry and mess call, spats used when parading, countless merit badges and signal flags.

A recipient of scouting highest volunteer award, the Silver Beaver, Baschnagel’s greatest achievement is his family. Joe and Maureen’s two sons have gone on to become doctors and their daughter is a teacher who married a doctor. They have six grandchildren, Tristan, Sebastian, Emma, Graham, Penelope “Sweet Pea” and Henry.

If you’ve got old scouting memorabilia laying around collecting dust, contact Baschnagel today at 434-4365 or email him at acepiping@gmail.com.