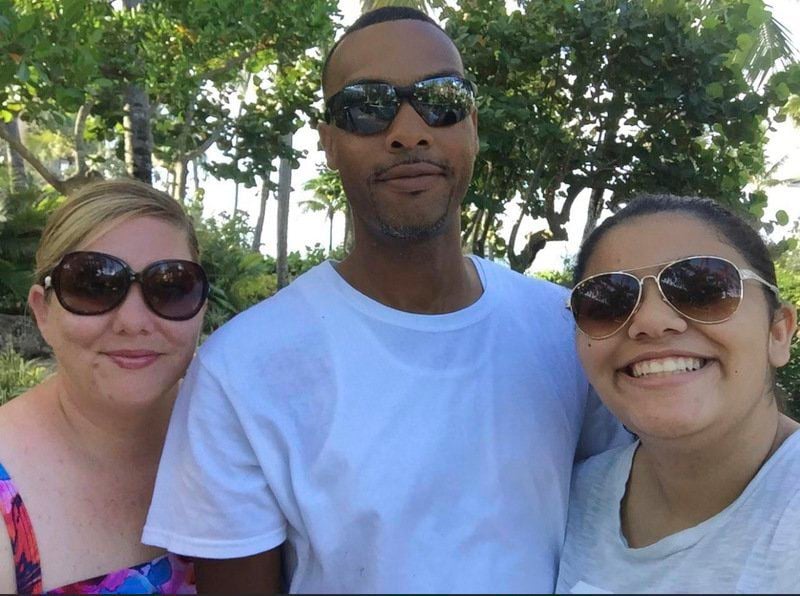 CONTRIBUTEDNicole Calamita, Troy Hodge and their daughter Tamara Hodge on vacation in the Bahamas. 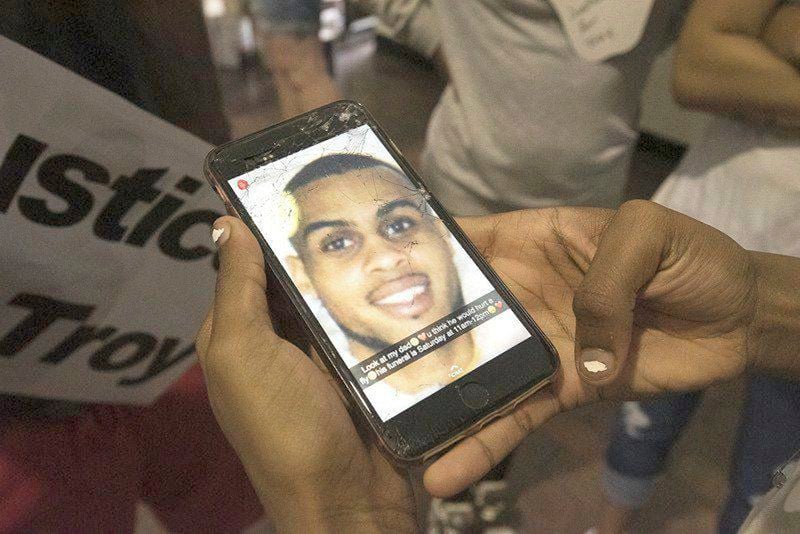 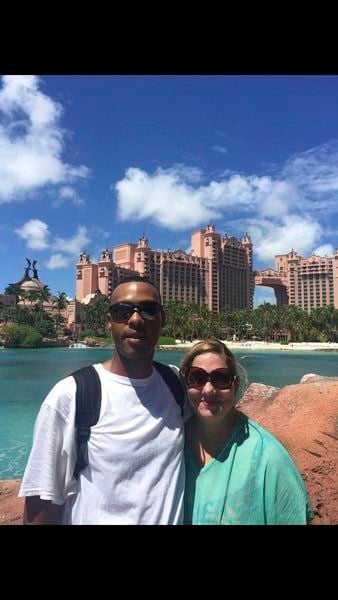 CONTRIBUTEDTroy Hodge and Nicole Calamita on vacation in the Bahamas. 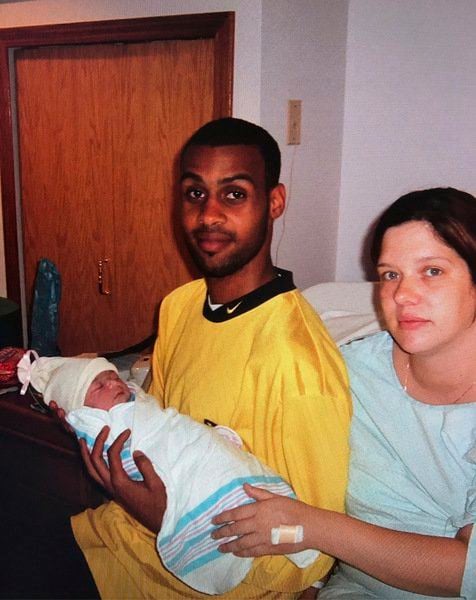 CONTRIBUTEDNicole Calamita, Troy Hodge and their daughter Tamara Hodge on vacation in the Bahamas.

CONTRIBUTEDTroy Hodge and Nicole Calamita on vacation in the Bahamas.

That was the day her longtime boyfriend, Troy Hodge, died following an encounter with police in Lockport.

Prior to his death, the pair, who were introduced by a mutual friend, had been dating for 20 years.

In the days before his encounter with police, Calamita said Hodge talked about the two of them going out together to shop for a wedding ring.

On June 22, 2019, Calamita found herself attending her boyfriend's funeral instead.

"Troy always wanted to get married, and I just put it off because of different reasons, nothing on his part that's he's ever done wrong," she said.

Police dispatched officer Daniel Barrancotta and Twin City Ambulance dispatched an ambulance, which arrived on the scene about 15 to 20 minutes later, according to former police chief Steven Preisch.

Polices reported that Hodge told Barrancotta he was going to go into Fatima Hodge’s home to get a gun. Barrancotta stopped Hodge from going inside and called for backup. Officer Marissa Bonito arrived shortly after, followed by officer Patricia Burdick, Lt. David Pytlik and four Niagara County Sheriff’s Office deputies.

During the encounter with police, Hodge suffered facial injuries and was Tased. After the encounter, Hodge collapsed in medical distress. He was declared dead shortly after arriving at Eastern Niagara Hospital.

The case remains under investigation by the New York State Attorney General's Office.

Calamita's interview with the Union-Sun & Journal is her first with a media outlet since her boyfriend died. She described living without him for the past year as "hell" and said the recent police-involved death of George Floyd in Minneapolis brought back a lot of painful memories.

"It just resurfaced a lot of emotion," Calamita said.

Together, Hodge and Calamita have a 15-year-old daughter, Tamara. Hodge also helped Calamita raise her two other children, Desiree Crenshaw and Phillip Crenshaw. She described Hodge as a funny, kind and soft-spoken, gentle soul.

"He was full of life. You always knew when he was excited. His whole face and demeanor would light up. He lived for his family and did everything for us," she said.

Calamita said Hodge helped around the house and drove their daughter, Tamara, to school every day because he refused to let her take the bus.

"Tamara doesn't get her dad to be her best friend anymore, like walk her down the aisle, see her graduate. This has affected her tremendously," she said. "That was her best friend. She was with him all the time ... I just don't want this ever to happen to another family. There has to be change."

Calamita said she has not been able to properly grieve for Hodge because she does not believe a full and accurate accounting of what occurred on the night of his death has been made. She contends there are inaccuracies in the officers' accounts of the incident. She declined to elaborate, citing the ongoing attorney general's investigation.

"I really can't grieve because I feel like he doesn't have the proper justice yet. ... I want Troy's truth to be told. I feel that they all should be held accountable. And they definitely should all lose their jobs," Calamita said.

On Wednesday, a spokesperson for the attorney general's office told the Union-Sun & Journal that there still is no update on its investigation.

Calamita said she has confidence in how the probe is proceeding and believes it is being done right.

"They are doing a really thorough investigation, and I would rather it take longer than be rushed. So, yes, we would all love the answers the day everything happened, but it takes time," she said.

James Grable, the attorney representing the Hodge estate, is conducting his own investigation, to determine whether civil litigation is viable. The attorney general's investigation is different in that it's a criminal investigation, he said. While the state's review could result in criminal charges against individual officers, Grable said it can't hold Lockport Police Department accountable.

"Our investigation and, if necessary, litigation, will be to bring about changes that a criminal investigation cannot. If our investigation reveals that the City of Lockport or its police department should have done things differently and caused Troy's death by their failure, we can bring a civil action to sue the city and the department in addition to seeking relief against the individual officers," Grable said.

Thomas Burton, the attorney representing three of the four involved officers, said he does not believe any of them will be charged by the attorney general's office. To date, he has not received any pronouncements from the office, including grand jury notices.

Grable said his investigation aims to uncover the truth around what happened to Troy Hodge on the night he died.

Grable argues that the police escalated the situation and failed to use practices that would have prevented Hodge's death.

"He would be with us today if they had followed proper procedures related to the use of force," Grable said. "We will show the truth of what they did versus what they should have done, and by doing that, we hope it will spare the next Troy from suffering what he and his family suffered and are suffering."

Burton said there are no statutory, penal law or departmental policy violations to be found in the officers' response that night.

"Show me a law anywhere, a penal law provision, and any administrative procedure or manual procedure, which is violated, and then we will see where the basis to fire these cops may exist," he said.

"Among other failures that night, the Lockport police officers rapidly escalated a non-violent situation to the use of lethal force, killing Troy," he said. "Use of force, especially lethal force, is an officer's last option."

Citing the U.S. Department of Justice's National Institute of Justice guidance on the "use-of-force continuum," Grable argued, "Police who are properly trained are taught to de-escalate and use the least amount of force necessary — Mr. Burton would have to agree — or none at all, unless more force is necessary.  Here, multiple police officers escalated the situation improperly to the use of lethal force in violation of the use of force continuum and proper police procedures."

Burton is representing officers Barrancota, Burdick and Pytlik, who were called for an internal departmental investigation, while officer Bonito was not. Burton said his clients were found by then-chief Preisch to not have violated departmental policy on the use of force. He noted that his clients waived their Garrity rights, which are rights that protect public employees from being compelled to incriminate themselves during interviews conducted by their employer.

All of the officers, including Bonito, submitted to voluntary interviews with the attorney general's office, Burton added.

Burton argues that, in his view at least, the medical circumstances that brought about Hodge's death were the violent encounter between him and the officers as well as acute cocaine overdose. Hodge was "delusional and had acute cocaine intoxication at the time of the event," Burton said.

"Mr. Burton attempting to blame Troy for his own death is offensive," Grable said in response, adding that the autopsy report indicated "homicide and acute cocaine intoxication."

"The fact of the matter is these police officers killed Troy Hodge. That's as simple as it gets. The cocaine didn't kill him. He'd be alive, and he'd be with us today if they didn't use excessive force on him," Grable said.

Attorney Paul J. Cambria, who is representing Bonito, agreed with Burton that the officers were justified in how they responded. He said there was "zero" wrongful conduct by any of the officers on the call.

Mayor Michelle Roman and Lockport Police Chief Steven Abbott, who was retired from LPD at the time of the Hodge call, declined to comment on Grable's claim of improper procedures, citing the ongoing attorney general's investigation.

Abbott did say that all four officers are either on desk duty or have been placed on administrative leave and that none of them are currently on road patrol. Bonito was on leave when Abbott became chief last year and remains on leave. After he was appointed chief, Abbott placed the other officers on desk duty pending the outcome of the attorney general's probe.

"When that investigation is going on they should be out of the public view," he said.

For about 17 years, Mark Sanders has filled a unique role in Lockport Police Department. He'…

As multiple Lockport police officers attempted to restrain him while pinning him to the ground outside his mother's Park Avenue home, Lockport…