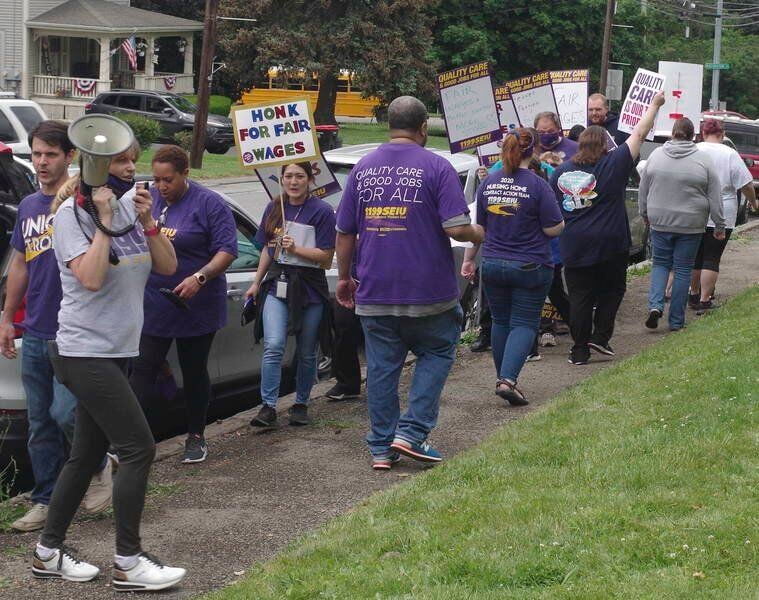 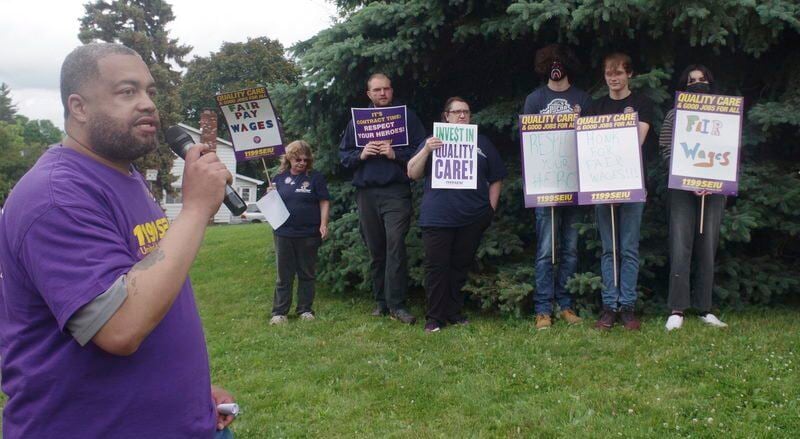 Will English, an organizer for 1199SEIU, addresses workers on the picket line outside Absolut Center for Nursing & Rehabilitation on Thursday. (Benjamin Joe / staff) 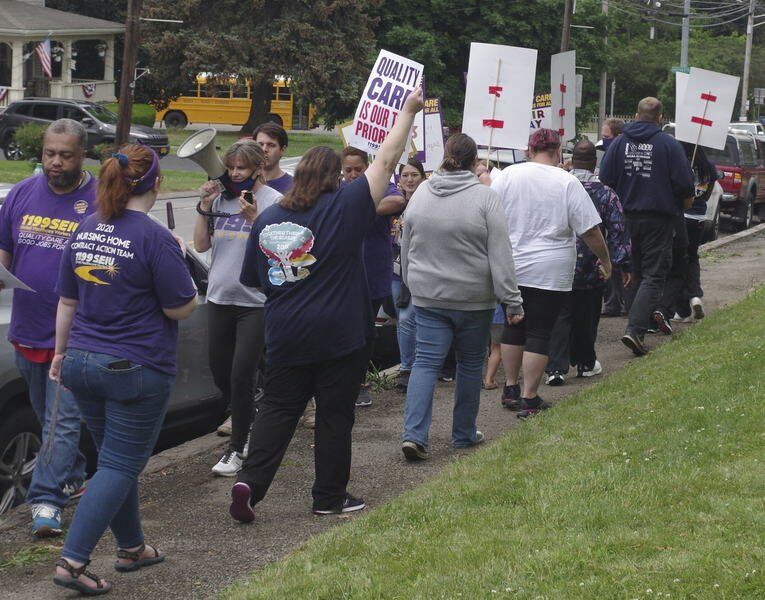 Will English, an organizer for 1199SEIU, addresses workers on the picket line outside Absolut Center for Nursing & Rehabilitation on Thursday. (Benjamin Joe / staff)

GASPORT — Workers at Absolut Center for Nursing & Rehabilitation at Gasport and their allies picketed in front of the facility on Thursday afternoon, demanding a contract that includes better initial wages and benefits, and better pensions. As nearly two dozen picketers shouted slogans and waved signs appealing for "Fair Wages," passing motorists honked their horns in support.

In calling for the picket, 1199SEIU United Healthcare Workers stated that RCA Healthcare Management, LLC, owned by Ed Farbenblum, had offered “less than competitive wages and benefits” for its members, many of whom feel disrespected after working short-staffed throughout the COVID-19 pandemic.

Seventeen-year employee Krista Burnett, a Certified Nursing Assistant, said she and her co-workers "held down the ship" during the pandemic and they deserve better from their employer. Specifically, she declared, “Fair wages and good pensions so we can provide for ourselves later on in life.”

“Fair wages now, so we can take care of our family,” 14-year employee Felicia Reinard chimed in. “I feel like we deserve it, working so hard, especially in a pandemic. I just think after being called a hero over and over again, us being on the front-lines, it’s time to show your appreciation for what we did.”

The contract in dispute covers 45 certified nursing assistants, food service, housekeeping, laundry and activities employees at Absolut-Gasport, according to an RCA spokesperson.

Reinard and other employees said every department in the facility is short-staffed and the reason is the pay is not fair.

Call and response was embraced on the picket line:

Representing Absolut-Gasport employees, 1199SEIU organizer Will English suggested why it's important for the community to support the workers.

“It’s very hard to recruit and retrain. We’re asking for something as close as possible to $15 (an hour), and the employer is not even close with that,” English said. “These people are still here from the Covid times. They came through it and worked and the management aren’t going to (pay).”

English said the workers want better wages and benefits not just for themselves, but for future nurses and aides. Continuity of care depends on new workers, he said, and new workers depend on decent pay.

Andrea Czora, R.N., vice president of RCA, stated in a press release that “RCA demonstrated throughout the COVID-19 pandemic our deep respect for all our front-line heath-care staff. This included being among the first providers in the state to create a $5-an-hour bonus for our employees working in a COVID area. That consideration is emblematic as well of our approach to our current negotiations for a new contract" with covered employees.

According to Czora, RCA raised its starting wage to $13.35 from $12.94 in April 2020, raised CNAs' rate to $13.70 in August, and made unspecified enhancements in employees' health insurance coverage in March.

“RCA respects and values our employees at Absolut Care of Gasport who care for our 62 residents and expects to agree soon on a fair contract that continues to enhance their salaries and benefits,” Czora stated.

The current contract expired in April and there's a reason why the employees aren't in a hurry to settle, according to Grace Bogdanove, vice president of Western New York Nursing Home Division of 1199SEIU.