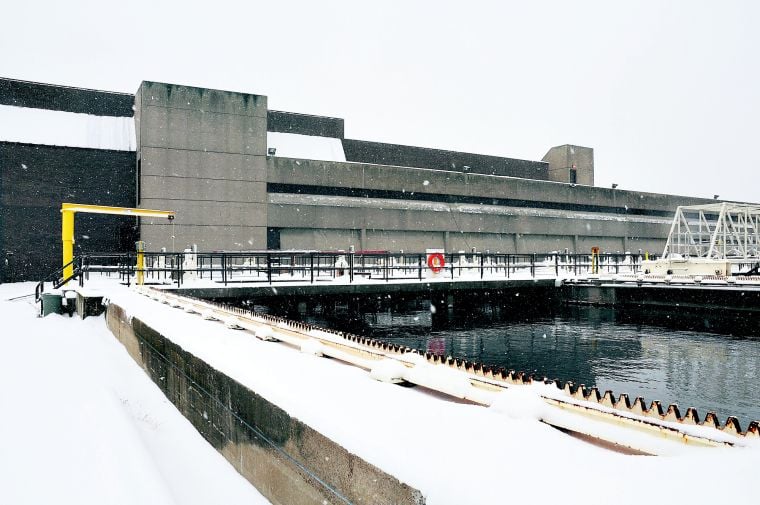 James Neiss/staff photographer FACILITY: The Niagara Falls Wastewater Treatment Plant on Buffalo Avenue. The Water Board hired a lobbyist in Albany to help it explore the possibility of treating fracking wastewater while the debate was playing out in the public.

James Neiss/staff photographer FACILITY: The Niagara Falls Wastewater Treatment Plant on Buffalo Avenue. The Water Board hired a lobbyist in Albany to help it explore the possibility of treating fracking wastewater while the debate was playing out in the public.

The Niagara Falls Water Board hired a professional lobbyist in Albany to help it explore the possibility of treating wastewater from natural gas drilling sites while the debate was playing out in the public.

The board hired e3communications, a buffalo lobbying and public relations firm, from January 2011 to April of 2012, when the board voted to discontinue its relationship with the company, according to the documents.

The process of high-volume hydraulic fracturing, commonly referred to as fracking, creates thousands of gallons of waste water at each well. That water — which contains chemicals, traces of radioactive material and other toxins picked up from deep below the earth’s surface — needs to be treated before being returned to the water table.

And so New York state’s decision on whether to allow fracking in the gas-rich Marcellus shale — an underground rock formation that runs across southern New York, Pennsylvania, Ohio, Virginia and West — could present an opportunity for the water board.

Water board officials announced last year that they were considering the possibility of treating wastewater created during the drilling process at the Falls water treatment facility as a way to generate additional revenue for the water board and to cut costs for ratepayers in the city.

Paul Drof, the executive director of the utility, said the board’s decision to work with a lobbyist was not an indication that the board supports fracking, but rather an effort to explore and better understand the issues surrounding the controversial process.

“We’re neither for nor against fracking, but if it happens we wanted to investigate what does mean to the waste industry as a whole,” Drof said.

If the practice of hydraulic fracturing or the treatment of the wastewater were to be allowed in New York state the utility would need to know whether the facility was capable of treating the fluids and what would need to be done — and at what cost — to be able to safely handle the waste, Drof said.

“Until we know what the treatment goals are, we can’t really predict that right now,” he added.

The utility treats about half the amount of water that it did when running at capacity, is dealing with constant infrastructure repairs and upgrade needs and has to cope with rising legacy costs from retired workers’ pensions, water board officials maintain. This year the utility will reach the end of a 20-year agreement with Occidental Chemical that brought the utility $64.5 million over that period. With the key revenue source drying up, the board will have to make up a $1.3 million gap in the budget.

Drof said the utility needs to explore any possible revenue sources to try to offset the many fiscal challenges it is facing.

Drof said he understands the public’s hesitation in accepting fracking waste, especially considering the community’s history of environmental issues. But, he noted, the utility would be subject to stringent regulations and monitoring from the DEC and the U.S. Environmental Protection Agency should it ever get into the frack water treatment business.

“We just can’t unilaterally decide to accept something,” he said.

And the plant already accepts a variety of chemical waste products for treatment, he added.

Wastewater from hydrofracking would be subject to the same scrutiny from government agencies as other waste already being hauled to the facility.

“It’s no different than what we’ve been doing from when we were part of the city until now,” Drof said. “We do take in hauled waste.”

Fracking has been a touchy issue for the Cuomo administration with environmental advocates demanding that the practice be banned, while industry insiders and land owners hoping to sell to the companies are urging the state to allow the practice under strict regulations.

A series of recently released polls from the Sienna Research Institute and Quinnipac University suggest public opinion on the fracking ban is narrowly split.

Environmental advocates say that even if the ban is lifted, the DEC cannot ensure that hydrofracking wastewater treated in the Falls, which would be discharged into the river after it is processed, would be safe.

Ted Janese III, the chairman of the water board, said with no end to the natural gas drilling debate in sight it was no longer fiscally responsible to continue to do business with the lobbyist from e3.

“It’s not a fight worth taking up at this point in time,” Janese said.