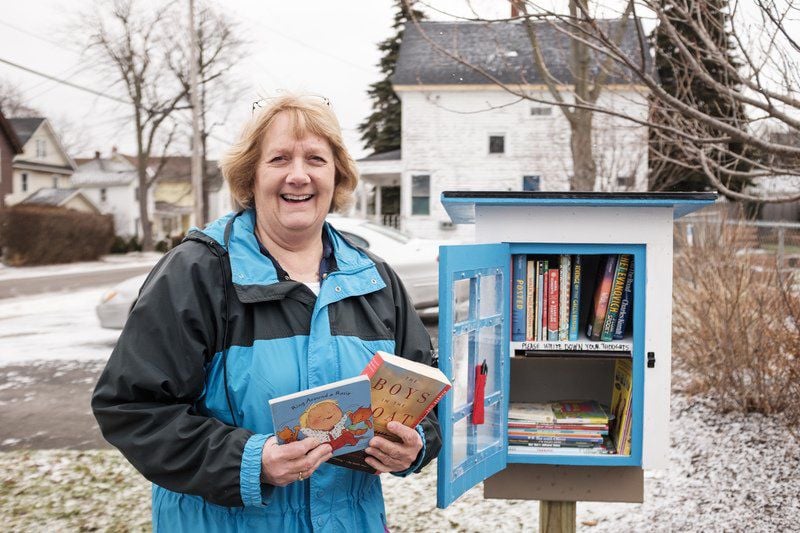 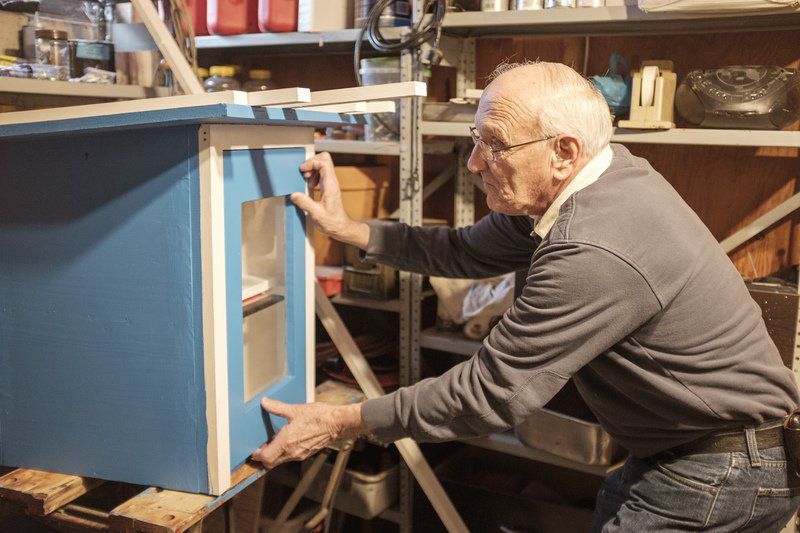 Joed Viera/STAFF PHOTOGRAPHERPaul Lyons installs a door on his third "Little Free Library" in his shop.

Joed Viera/STAFF PHOTOGRAPHERPaul Lyons installs a door on his third "Little Free Library" in his shop.

A local writer, a retired teacher, and a school bus driver have teamed up to bring some new libraries to Niagara County.

The catch is that they’re a bit smaller than you’d imagine.

While at a conference in California last summer, Judy Bradbury, a full-time writer and Niagara Frontier Reading Council board member, saw a tiny library in the middle of a square.

“I thought these are really cool, I looked into it a little bit more and I realized that they’re national,” Bradbury said. "They have a list of where all these are throughout the country if you register them.”

There are more than 50,000 of these small houses of books or “Little Free Libraries” registered around the world, including a few already in Niagara County.

“Ideally what happens is people go and take a book and they leave a book so that there's always an influx of books,” Bradbury said. "It's to promote reading, especially in areas that maybe people don't have access to books.”

Bradbury shared her experience with the little free library in California with other board members on the NFRC.

"We decided to get them going in our area, looking to place them in areas of need,” she said.

Renny Staples, a retired Starpoint reading specialist and former board member of the NFRC, suggested they build one in Pendleton.

“We don’t have a public library so I thought that this would be a great place to start,” Staples said. “Starpoint has excellent school libraries, but they’re closed in the evenings and on weekends.”

Although there are pre-built libraries available for purchase, Staples thought it would be a good idea to construct one. And she had a friend in mind that could do just that, Paul Lyons.

“You can buy them pre-built but we wanted to create our own,” said Staples. “We both have passions for being busy. My passion is reading and his is woodworking.”

Lyons, a former Bell Aerospace sheet metal worker has spent the last three years of his retirement as a school bus driver for special needs students. Lyons calls himself mechanically inclined and has always had an affinity for building things. After pulling midnight shifts at Bell Aerospace, he’d spend the rest of the day working as a contractor.

“I'd get out of work and go to work with my father,” Lyon said.

“He is a very good woodworker,” Bradbury said.

“It's my knack. I've been into building things all my life,” Lyons said.

He found plans online and modified them, so the Pendleton library would survive Western New York winters. He upgraded the materials and built the library in his basement shop.

While in the process of building the first one, the Lockport Rotary Club donated money to the NFRC for two more libraries. The first was installed Dec. 13 in front of Pendleton Town Hall on Campbell Boulevard, with the second following a week later at Washburn Street at the site of the Imagine Community Gardens in Lockport.

“We're in the process of building a third one that is going to go on Ontario Street in the spring,” Bradbury said.

"Our motto is 'We’ve been blessed,' we believe in giving back and helping,” Lyons said.

To find more little free libraries in the area, visit online at littlefreelibrary.org/ourmap.

To learn more about the NFRC visit: http://www.thenfrc.org/.

Sandra B. Garlock, age 62, formally of Lockport, NY, passed away on April, 8, 2021 in East Wakefield, NH. She was born in Danvers, MA, on December 22, 1958 to the late Emily and Robert Camp. Sandra was employed as a School Bus Monitor for Ridge Road Express while living in Lockport. She is s…