While the Brickyard restaurant on Center Street in Lewiston has been fully restored after a horrific fire last year, owners and the gneeral manager are still working to restore the brewery restaurant, Brickyard Brewing, and hope to be open in July. 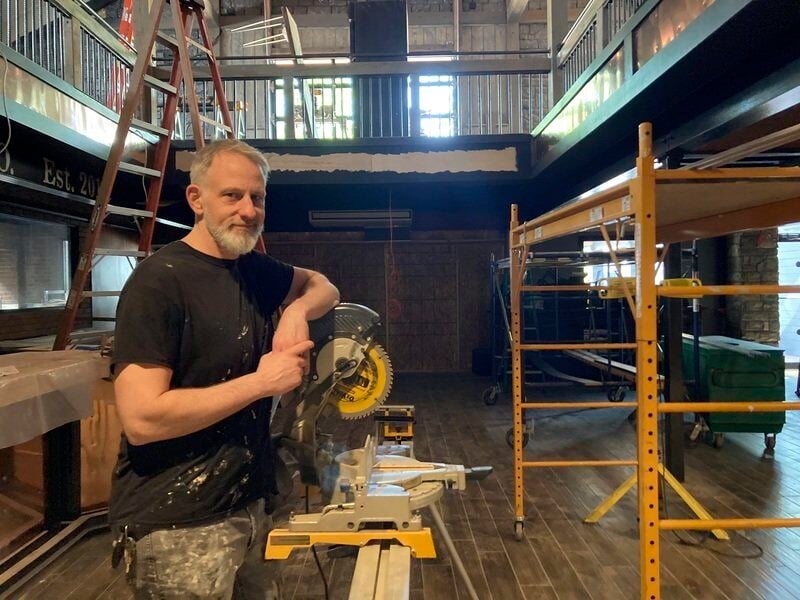 Michele DeLuca/StaffSteve Matthews, the general manager of the Brickyard and the Brewhouse, continues to help the co-owners — his brother Eric Matthews and Ken Bryan — restore both businesses from the devastating fire last year.

While the Brickyard restaurant on Center Street in Lewiston has been fully restored after a horrific fire last year, owners and the gneeral manager are still working to restore the brewery restaurant, Brickyard Brewing, and hope to be open in July.

Michele DeLuca/StaffSteve Matthews, the general manager of the Brickyard and the Brewhouse, continues to help the co-owners — his brother Eric Matthews and Ken Bryan — restore both businesses from the devastating fire last year.

It was a horrific event, with the flames lighting up Center Street while staff and owners watched in disbelief, but the rebuilding began almost immediately and the restaurant is now open. Meanwhile, owners and staff are working on the nearly complete rebuilding of the brewpub.

General Manager Steve Matthews, has been working alongside the co-owners — his brother Eric Matthews and Ken Bryan — to restore both businesses. He took a few moments away from painting this week, to talk about the events of the last year.

QUESTION: Can you tell me about the night of the fire last May 26? What happened?

ANSWER: It was about 10:30 at night. I had just fallen asleep and I received a phone call from our alarm company that there was a structure fire. I jumped out of bed, threw my clothes on, and got here as fast as I could. My brother Eric was already on site and Ken was en route. From what we’re told it started in the walk-in cooler which was on the other side of our brewhouse. When I caught up with my brother and his fiance. some of our staff were already here. By the end of the night, there had to be 50 staff members standing behind us. Everybody was crying. It was pretty emotional. We built the brewery the first time thinking, "Ok, this is going to last a couple of hundred years. Watching all that go up was heartbreaking."

Q: The Brickyard has since opened. How bad was it damaged?

A: It was heavily damaged. We basically stripped and rebuilt Brickyard first. That was more smoke and water damage. Over here in the Brewpub, the entire upstairs was gone. We had to start from scratch. They demolished it pretty much down to the second story deck and we just rebuilt up. Pretty much the entire second floor is new.

Q:  How did your employees respond to the fire?

A: The night of the fire, it was almost tougher seeing the staff members who had worked with us for 15 to 20 years. I turned around and they were all there. It was pretty moving. We hugged. They said we’ll help you out. Quite literally the next week, we were in there ripping up floors and everyone was getting dirty with us.

Q: Are you coming in with any new features you didn’t have before.

A: A couple. At that point, our business on the brewery side and the beer brewing had expanded. The time we were rebuilding the Brickyard, we had a couple of months to figure out what to do differently. Now, the whole brewing process has been moved out back. We used to have an aging facility out back where we would barrel beer and store it for up to a year at a time. We recently built an addition off that building and the fully encapsulated brewing facility is out there. We're turning the back room into a dining facility. Behind me, you do see the beer service tanks. Those are original and unharmed. Ironically, downstairs, upfront here was relatively untouched. All the drywall is relatively new, but the bones are undamaged.

Q:  The patio upstairs had to be rebuilt?

A: One of the structural changes we decided to make was creating access to the patio downstairs by a sliding glass door. Upstairs in the front, there used to be a service bar for banquets. We’ve actually pulled the bar from the front area, completely opened the front, and put a full-size garage door to the upstairs patio. Now the bar is in the back so it can serve groups in both the front and back of the building when we’re hosting two events simultaneously.

Q: When do you see the Brewing Co. completion?

A: A lot of the work is being done by my brother Eric and Ken. We have a finish carpenter, Mark Placek, and he's the idea man and does the trim work none of us like to do. It’s a very core crew. We outsource things we can’t do like electricity.  The ceiling and stonework, we did all that. All the wood paneling we did up there, that’s all us. As for opening the brewpub, we were shooting for the beginning of June but lining up contractors has become a little bit of an issue as the economy starts to roll again. We’re hoping to reopen by the beginning of July.

Q: What did you think about the citizen fundraising efforts to help the restaurants?

A: That was nothing short of amazing. There were actually several campaigns and well over $20,000 was raised. Once the fundraising efforts came to a conclusion, we took that money and dispersed it among our staff, which was roughly 50 staff members between both restaurants. We also started brewing beers to thank people. Two weeks from now, June 12, will be the release of the collaboration between us and the five fire companies that were there the night of the fire. We want to pay them back so we're releasing a beer called 'Nozzle Nut," which is what they call the rookie firefighters who like to get on the hose and put the fires out.  We’re donating proceeds from the sale of the beer four-packs and cases. We’re also going to do a barbecue chicken fundraiser on the day of the release, June 12. The proceeds will go to something the firefighters decide on.

Q: How do you feel about the community's response?

A: It was almost like you felt you didn’t deserve it. But, time and time again, we’ve had people tell us, "look you’ve been helping out people in the area for 26 years," from the time of Ken and Eric's first restaurant,  which was Tin Pan Alley. We’ve been trying to help out wherever we can, sponsor baseball teams, little things. I guess all that adds up through the years. When you are in need, it's a great community."

Take a look inside the restoration of the Brickyard Brewing Co., which was destroyed by a devastating fire last year.