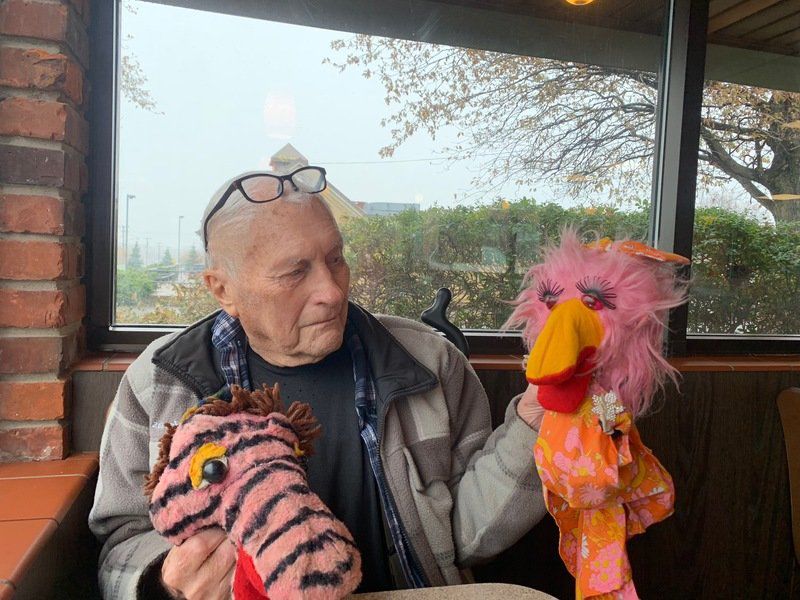 Connor Hoffman/StaffTom Jolls holds two of the puppets from his much-beloved "Commander Tom" show. The former WKBW broadcaster was recently inducted into the New York State Broadcaster Hall of Fame. 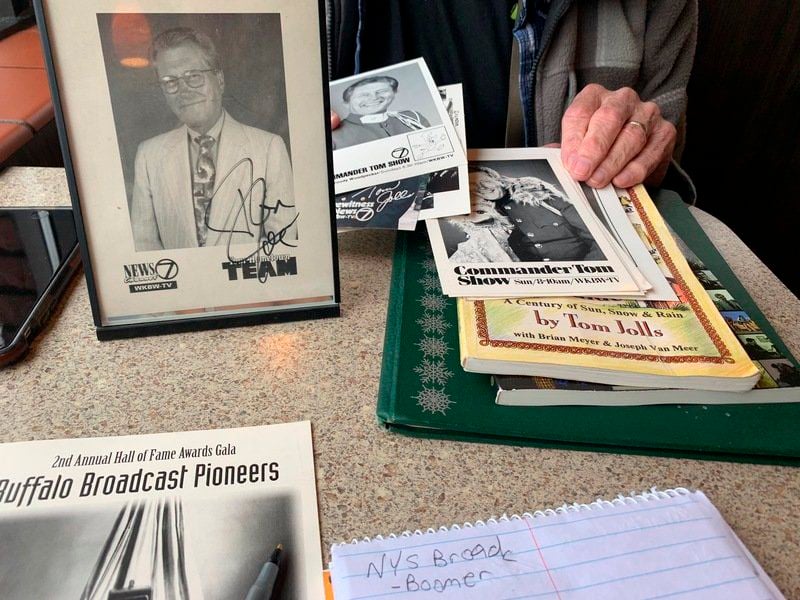 Connor Hoffman/StaffTom Jolls shows off some of his old photographs and a book he wrote.

Connor Hoffman/StaffTom Jolls holds two of the puppets from his much-beloved "Commander Tom" show. The former WKBW broadcaster was recently inducted into the New York State Broadcaster Hall of Fame.

Connor Hoffman/StaffTom Jolls shows off some of his old photographs and a book he wrote.

As an only child, Tom Jolls enjoyed spending time with what he described as his "make believe friends."

Those "friends" would later serve as the inspiration for the personalities and puppets who were tied to one of his most memorable creations — the children's television personality known to generations of Western New Yorkers as "Commander Tom."

"I had make believe friends and so I had these voices and it all came to use in the Commander Tom show," Jolls said.

To this day, the 86-year-old Jolls, who has been retired from WKBW television now for 20 years, still considers it a "great honor" when he continues to hear from so many people who fondly remember him as the "Commander."

"People will still see me on the street and say, 'Hi Commander,' " Jolls said during a recent interview. "They're always telling me how they'd rush home from school to watch the show. And I knew that we made a lot of children happy and that was a very important part of my career and my feelings that I made children happy."

Jolls came a long way since his days growing up in Niagara County. He was born and raised in Newfane before his family moved to the Town of Lockport.

He credited his time at North Park Junior High School for the beginning of his interest in announcing and acting, noting that he was responsible for the morning announcement at school everyday.

His first media job came at WUSJ, which is now known as WLVL, where he worked from 1951 until 1963. He then worked at WBEN radio for roughly two years.

In 1965, he went to work at WKBW, where he worked until he retired from the television station in 1999.

In addition to becoming of one of the most watched and respected weather forecasters in Western New York, Jolls worked as Commander Tom, a character he played after receiving permission from a program director to give the show a try.

"The Commander Tom Show" evolved into one of the most popular local children's programs in the area. In addition to serving as the lead actor, Jolls lent his voice to the show's puppet characters as well.

Jolls said he didn't have a background in weather, but noted that knowing the weather of the day was always important in his youth because he lived in the rural Town of Lockport.

"We lived in the country and pretty much relied on the roads being plowed for me to get out and go to school," Jolls said. "I was always cognizant of the weather playing an important part in my life because I walked to school everyday ... that was a good 3-, 4-mile walk."

Jolls also recalled how the Blizzard of '77 changed the weather forecasting portion of television news.

"That was kind of a surprise because nobody really had forecast anything that was going to be of that magnitude. What happened was that Lake Erie had frozen over and on top of that ice was a lot snow, and with all the wind that developed it was blowing more snow off the lake than it was coming down," Jolls said.

As a result of the Blizzard of '77, weather became a very important factor in television newscasts, Jolls observed.

"I used to get two minutes at the end of the show, roughly, and I was lucky to get that because in those days news took precedence and sports took precedence. But then, suddenly, weather began to be more important to people ... so we got moved up," Jolls said.

Jolls said "everyday" people pulled him aside to ask how the weather was going to be.

"That would be the first thing they would ask if they recognized me ... I was always prepared for those questions," Jolls said. "That was part of the routine that I had became accustomed to, that people we're going to ask me about the weather and, to me, that was a compliment. It never became a problem. I never found it to be annoying. I was always happy that I was able to give them a little insight."

Jolls said weather forecasts on television news have changed quite a bit.

"Well, to give you a good example when I started doing the weather we did it outside, all the years that I worked there. It was the weather outside regardless of whether it was snowing, thundering or whatever," Jolls said.

He added that it has evolved in such a way with a "huge amount" of resources being used to help forecast the weather, like satellites and the internet.

"Just the technology that we have today is like the difference between night and day," he added.

Jolls retired at the age of 66 because he said he was ready to step away.

"I had my fun. I did what I had always dreamed of doing," he added.

With his retirement, Jolls spends time with his family, saying that he has 17 grandchildren and nine great grandchildren. He also enjoys gardening during his down time.

At first, Jolls and his wife spent six months in Florida, but decided to come back to Buffalo year round as they felt they were missing too much with most of his family living here.

In October, Jolls was inducted into the New York State Broadcaster Hall of Fame.

He described it as "a wonderful experience," something he never imagined would happen to him.

"My whole family was there ... It was quite an honor, and it was something I never really thought I would experience," Jolls said.