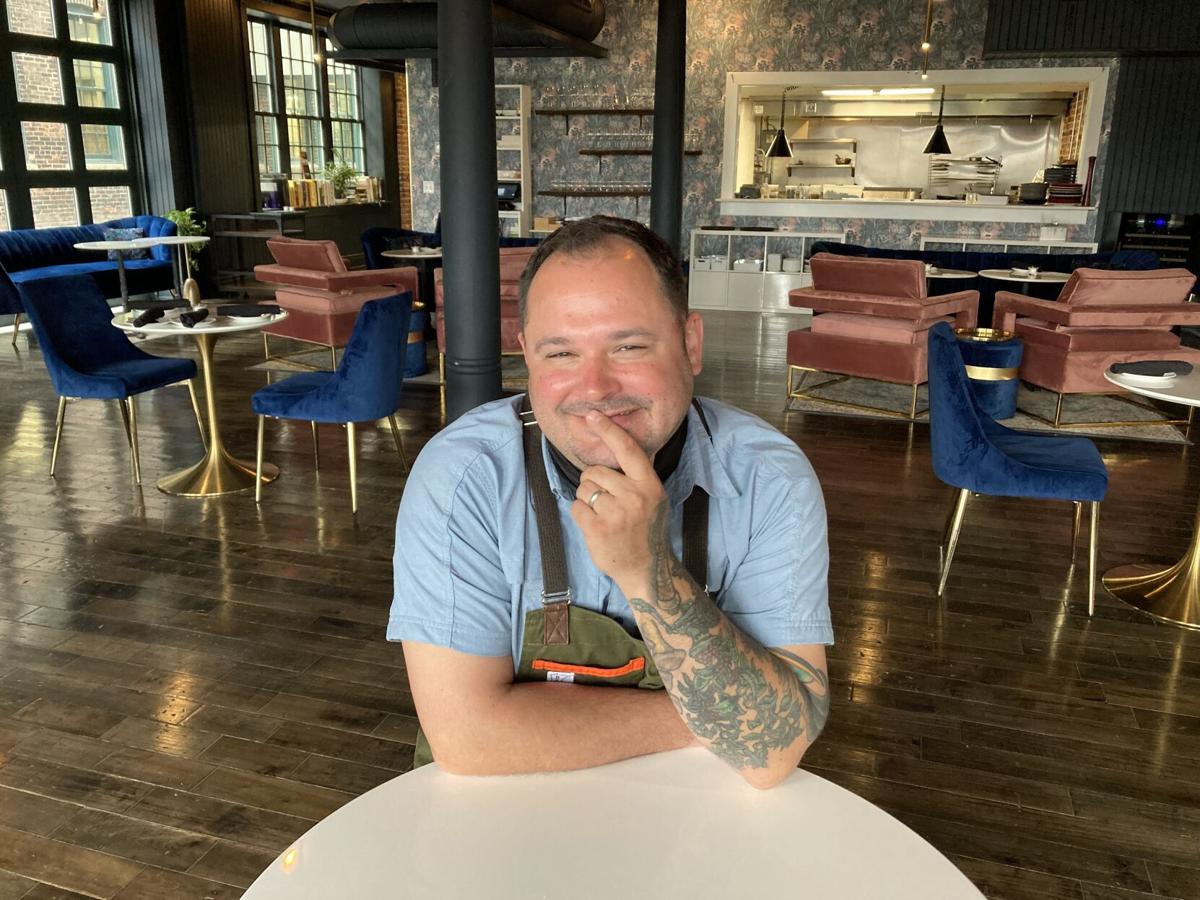 North Tonawanda-raised Chef Edward Forster of Waxlight Bar a’ Vin, is helping to lead a food revolution on Chandler Street in Buffalo. Below: The restored building at right is the home of Waxlight Bar a’ Vin on Chandler Street in Black Rock, an area that is experiencing new life at the hands of Buffalo developer Rocco Termini. (Photos by Michele DeLuca) 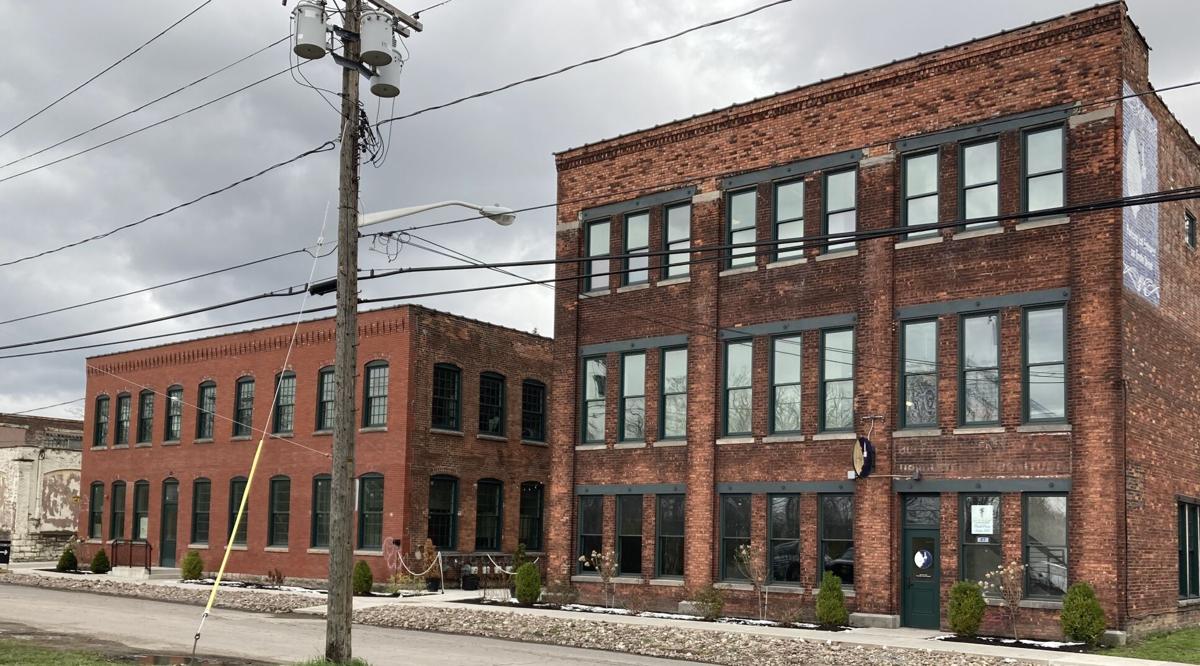 North Tonawanda-raised Chef Edward Forster of Waxlight Bar a’ Vin, is helping to lead a food revolution on Chandler Street in Buffalo. Below: The restored building at right is the home of Waxlight Bar a’ Vin on Chandler Street in Black Rock, an area that is experiencing new life at the hands of Buffalo developer Rocco Termini. (Photos by Michele DeLuca)

Once upon a time, a merry band of restaurant professionals opened a charming restaurant in a forgotten industrial community adjacent to the Niagara River.

No, not Niagara Falls. This place is in another forgotten industrial community, just down the Thruway in Buffalo’s Black Rock, on a street some might describe as gritty and unkempt. This tight-knit group of five, armed with extensive knowledge of foods and spirits, have created a sweet little dining room and wine bar inside a refurbished factory, a place where blue and pink velvet chairs add warmth and comfort to a setting of exposed brick, sleek air ducts and an open kitchen. This place, in the interest of self-disclosure, is one of my favorite restaurants, Waxlight Bar a’ Vin at 27 Chandler St. just south of Hertel.

Among those creating a dining experience lit by exuberant passion there is North Tonawanda-raised Chef Edward Forster.

You may have heard about Chandler Street. It is a former industrial location edged by train tracks, which has slowly been evolving since Developer Rocco Termini brought his formidable restoration muscle there after winning hearts in downtown Buffalo with projects including the Lafayette Hotel.

The street, which begins at Military, just south of Hertel, is where Termini appears devoted to creating a business and entertainment hub, with the construction most recently of a soon-to-be-completed swimming pool club.

Termini began to grow Chandler Street a couple of years ago with the opening of Thin Man Brewery, housed in a former industrial building and offering food from downtown Buffalo’s Tappo restaurant. Then Waxlight opened and around that same time, a wide variety of hip and innovative food and drink businesses came to the street.

A delicious array of products are offered in a variety of buildings, including ciders, pickles, mushrooms, dumplings, smoked meats, bagels, luxury chocolate and cake pops.

The Winter Market held in Waxlight’s parking lot every Saturday was a favorite destination of mine for taste-tasting treats from the street. A Spring Market will be taking place soon, so I’m watching details of that on Facebook.

Waxlight Bar a’ Vin is the exquisite crown jewel of the street and one of my happy places. It’s where I’ve had flowers in my cocktail, freshly cooked potato chips flavored with chicken and my first taste of beef tongue, an odd and yet delicious dish that pays tribute to cultures that don’t waste a bit of the animals that become our food.

The ever-changing menu includes food descriptions such as these: “Carrot bisque with a cascara gel, carrot fudge and Castelvetrano olive,” or “Pork tenderloin smoked over locally foraged juniper branches,” and “Crispy pickled squash rings with a freeze-dried corn and aji Amarillo aioli.” Most diners, including me, need to be walked through the offerings but listening to the knowledgeable servers — often one of the owners — describe the menu, is like hearing a fascinating story.

I was there one night with my husband and, ever curious about the growing popularity of both the restaurant and the street, I asked sommelier and co-owner Jess Railey, if any of the six Waxlight owners had Niagara County roots.

That’s when I learned from Jess that one of her partners — and her new husband — Chef Edward Forster, grew up in North Tonawanda.

I visited Edward at the restaurant Thursday afternoon and had a great talk with him about how he and his partners, including fellow chef, Joseph Fenush, formerly of Toutant in Buffalo, intend for Waxlight to be comfortable enough for a nice drink and quick bite as well as a unique and delicious dining experience.

“We want to be a come as you are kind of place where you can celebrate your 40th birthday in a t-shirt with a fancy steak, or stop by in a suit after work for dessert and a glass of pink bubbles — and sit next to each other and feel totally comfortable,” he told me.

Forster started his career humbly enough, washing dishes at Tan Tara Golf Club in North Tonawanda, a job he got when his twin brother, Scott, had to leave the post. That job put Edward, a 2001 North Tonawanda High School graduate, on a path to Niagara University and then to the Culinary Institute of America in Hyde Park. Eventually, he worked at a variety of high-end restaurants in Philadelphia, Chicago, London and Paris.

When he returned to Buffalo, Forster did a stint with renowned Buffalo Chef Mike Andrzejewski and those experiences led to him gathering up four of his friends, including Fenush, Railey, Jeff Yannuzzi and Tony Rials, all with extensive wine and spirits expertise, and opening Waxlight Bar a’ Vin.

Now the group is leading the evolution of Chandler Street, helping to transform the once gloomy and forgotten industrial area into a destination filled with new sights and sounds. It’s not fully there yet, but you can see it if you squint your eyes.

The story of Waxlight Bar a’ Vin and Chandler Street makes me happy. It reminds me how people filled with imagination and a passion to share their gifts, can transform a community in which they’ve invested. It makes me wonder what’s possible in areas far more gifted with potential, specifically an area with world-famous waterfalls and historic canals.