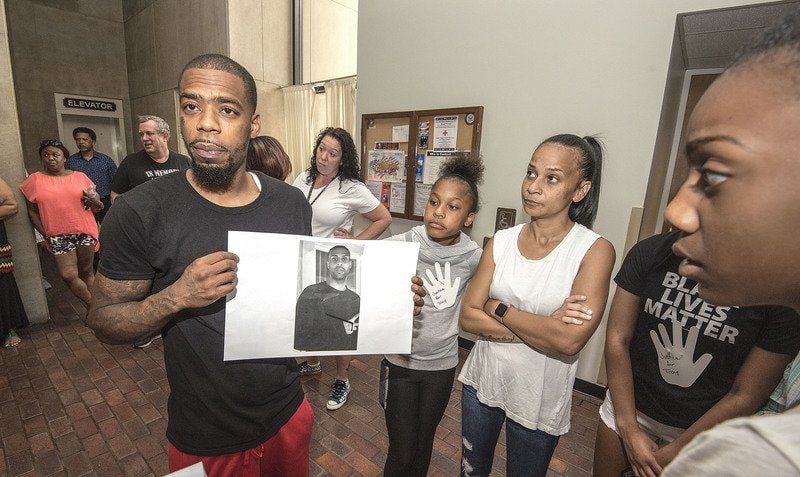 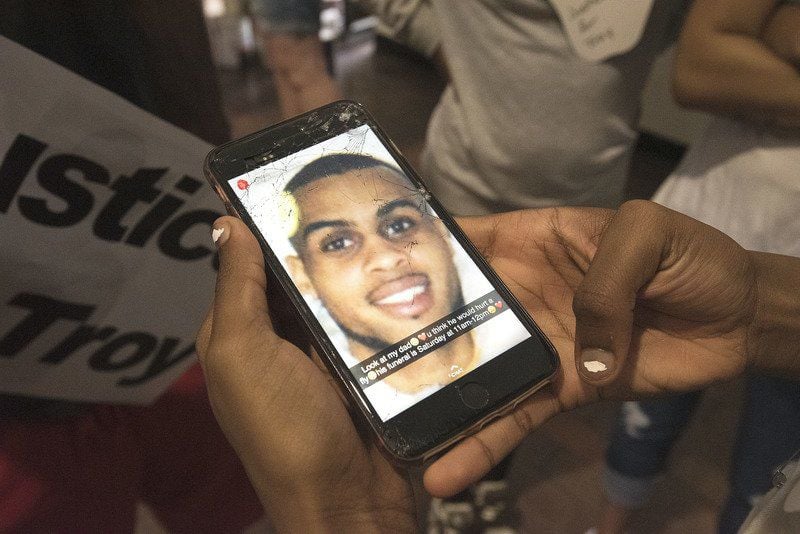 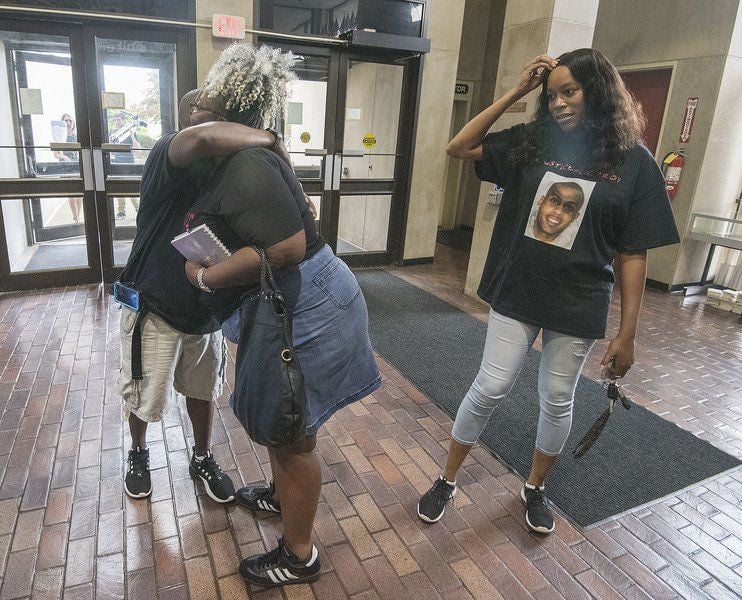 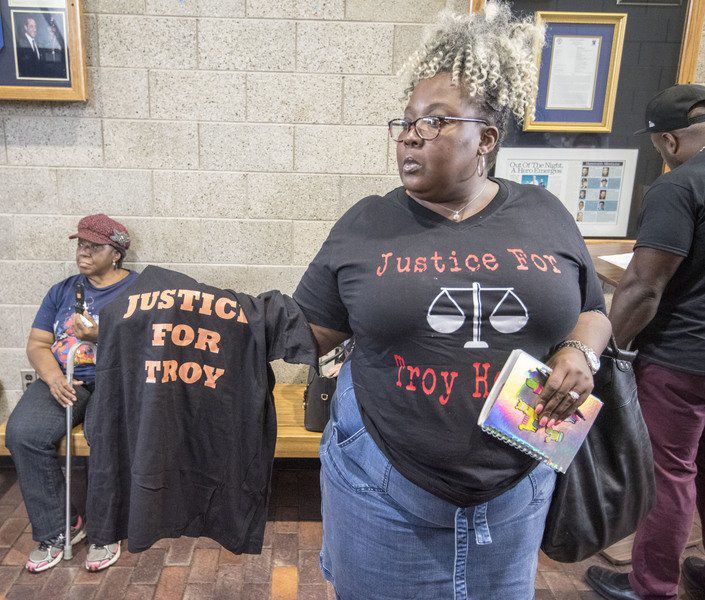 James Neiss/staff photographerFamily friend Kinberly Jenkins was among those at City Hall on Wednesday night. 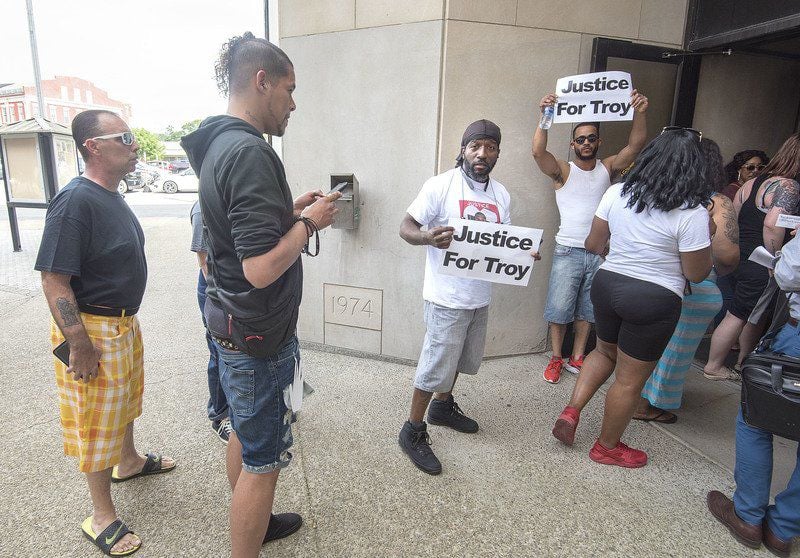 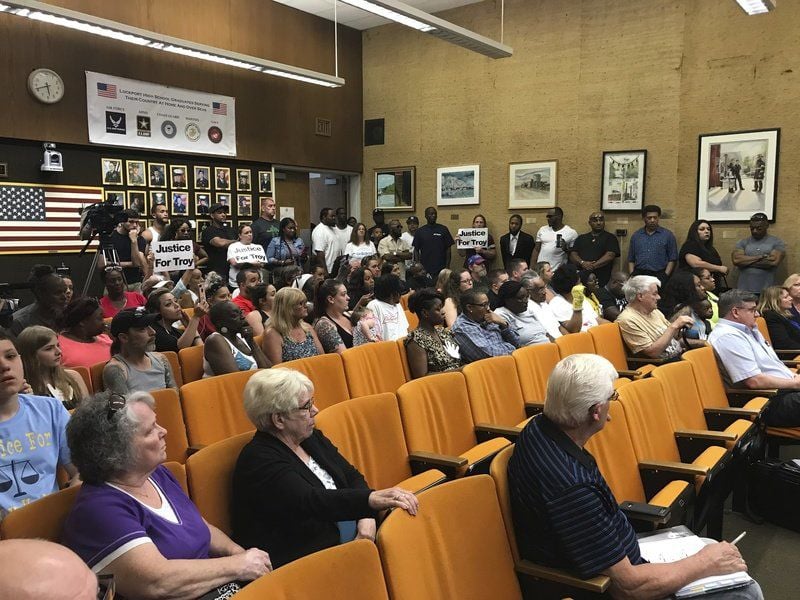 Tim Fenster / REPORTERDozens of residents, rallying over the death of Troy Hodge during an encounter with Lockport police Monday, packed into council chambers Wednesday. Their presence turned a regular council meeting into an impromptu forum on police practices, transparency in the criminal justice system and racial discrimination in Lockport.

James Neiss/staff photographerFamily friend Kinberly Jenkins was among those at City Hall on Wednesday night.

Tim Fenster / REPORTERDozens of residents, rallying over the death of Troy Hodge during an encounter with Lockport police Monday, packed into council chambers Wednesday. Their presence turned a regular council meeting into an impromptu forum on police practices, transparency in the criminal justice system and racial discrimination in Lockport.

Residents are demanding answers about police practices and transparency, after Troy Hodge died in an encounter with four city police officers outside his mother’s Park Avenue home early Monday morning.

Hodge, 39, of Lockport, was Tased and suffered cuts and bruising to his face during the altercation, which also left three officers with minor injuries. Police say Hodge threatened to get a gun — which prompted the altercation — and brandished an open pocket-knife during the fight.

But supporters of Hodge, who is African-American, painted a far different picture of the encounter.

Many of Hodge’s friends and family say Hodge had the knife closed in his pocket and that officers shot him with the Taser after he was already handcuffed and on the ground.

Hodge’s mother, Fatima Z. Hodge, said in a television interview Monday that police body-slammed and deployed the Taser on her son until it “broke.”

“It broke on my child they did it so many times,” said Fatima Hodge.

Supporters also pointed to a video, shot by a bystander across the street, documenting the encounter. Rafael Gomez, an attorney representing the family, confirmed the authenticity of the one-minute-and-15-second cell phone video.

Neither Troy Hodge nor the officers are visible in the video, which shows the front of 217 Park Ave. and a parked police car with its emergency lights flashing.

Other voices in the video can be heard saying, “Let go of the knife,” followed by a sound that apparently was a shot from the Taser.

The video, shared repeatedly on social media, fueled outrage and pain amid a time of heightened awareness of unarmed black men dying in encounters with police.

“There are questions that need to be answered. Protocol needs to be changed regarding people with mental health issues. A mother called for help with her son, and he was killed,” said Kimberly Jenkins, a family friend who organized the rally. “Things like that shouldn’t happen. People in the community want answers.” The rally coincided with the common council’s bi-monthly meeting. The demonstrators packed into council chambers and turned the run-of-the-mill meeting into a nearly two-hour forum on police practices and the encounter with Hodge.

A previously-scheduled presentation on property tax exemptions lasted only a few minutes before demonstrators interrupted, calling for racial justice and expressing outrage at Hodge’s death. “We don’t care about mortgages and taxes right now,” said Joshua Lopez, owner of the video game and comic store Toys From Lo. “We have a black man dying in our neighborhood at the hands of the police.”

Several speakers cast the incident as a pattern of misbehavior by Lockport police, particularly involving African-Americans. Felicia Grooms, a longtime friend of Hodge, said the department’s lack of African-American officers could fuel its alleged abuses of black residents.

LPD Community Policing Aide Mark Sanders is the only African-American member of the department and is not an officer.

“The biggest issue in Lockport is none of the people look like us,” said Felicia Grooms. “And a scared cop, when they see us, is a very risky cop.”

Mayor Michelle Roman tried to calm the crowd and called for a separate forum to address policing concerns in the wake of Hodge’s death. “We need to work together toward healing and improve our community relationships,” Roman said.

But she and other city officials were frequently drowned out by demonstrators.

Chief Steven Preisch and District Attorney Caroline Wojtaszek fielded questions on the encounter, in between public speakers who spoke of their pain over Hodge’s death and their grievances with a criminal justice that many said treats black residents far worse than whites.

Many decried the “injustice” of four white police officers being on paid administrative leave, after an encounter that left a black man dead.

“There’s a lot of pain in this room,” Wojtaszek said near the end of the impromptu forum.

Police dispatched Officer Daniel Barrancotta, a six-year-veteran, and Twin City Ambulance dispatched an ambulance, which arrived on the scene about 15 to 20 minutes later, Preisch said Wednesday.

Hodge was behaving incoherently and told Barrancotta he was going to go into Fatima Hodge’s home to get a gun, according to police. Barrancotta stopped Hodge from going inside and called for backup. Officer Marissa Bonito, a one-year veteran, arrived shortly after, followed by Officer Patricia Burdick, Lt. David Pytlik and four Niagara County Sheriff’s deputies.

Thomas Burton, an attorney representing the officers, said Hodge brandished an open knife at the officers.

“They used everything they could to get the knife out of his hand, and it was a mighty undertaking to do that,” Burton said Tuesday.

Friends of Hodge say the knife never came out of his pocket. Dawn Johnson, who described herself as a distant cousin to Fatima Hodge, said Hodge was an avid fisherman and only had a fishing knife.

“He is no threat. He is not violent,” said Carl Person, a city resident and longtime friend of Hodge.

Preisch said he has yet to determine where the knife was recovered. He attributed the delays to legal complications involving caselaw that protects police from being prosecuted based on statements that superior officer order them to make, under threat of disciplinary action.

Both police and supporters agree the Taser was used on Hodge, but dispute the circumstances of its use.

Friends and family say Hodge was already on the ground and in handcuffs when the Taser was used.

Asked about that allegation, Preisch said: “I don’t believe that’s accurate from what I know.”

Sometime after the use of a Taser, the officers sought medical attention for Hodge. He was taken to Eastern Niagara Hospital — Preisch said the officers performed CPR in the ambulance — where he was pronounced dead at about 1:15 a.m.

An autopsy was performed on Hodge Monday at the Erie County Medical Examiner’s office. Investigators are awaiting the results of a toxicology test, which Wojastzek said could take several weeks.

“We asked that it be made a priority,” Wojtaszek said.

Two of the responding officers wore body cameras, but one was not on and the other fell off and did not capture the incident, Preisch said Wednesday. Wojtaszek said her office is reviewing body-camera footage from deputies at the scene.

Preisch said the department requires officers to use body-cameras during traffic stops, but not all encounters.

Preisch also confirmed the authenticity of the bystander video, but said it omitted crucial moments earlier and alter on in the encounter. The bystander refused requests from police for the video, Preisch said.

“Now we have to go through legal channels. That could be potential important evidence,” Preisch said.

The Niagara County District Attorney’s office is investigating, while the New York Attorney General is reviewing the incident to determine whether it has jurisdiction over the case.

A 2015 executive order by Gov. Andrew Cuomo required the attorney general to act as a special prosecutor all deaths of unarmed civilians at the hands of police.

“They’ve been there through every step of this,” Wojtaszek said. “We’re all gathering facts, and everything is being shared.”

The attorney general’s office, upon completing such investigations, typically releases public reports detailing the fatal encounter. Wojtaszek vowed her office would do the same.

“This is a tragedy. We will get to the bottom of it, and you will get all the answers,” Wojtaszek said.

“This community will know every single fact of this case as I know it,” she later added.

The New York Attorney General has announced it will investigate the death of Troy Hodge, a Lockport man who died after a scuffle with city pol…