James Neiss/staff photographerMarching up Park Avenue, protesters seek justice for Troy Hodge on the anniversary of his death. 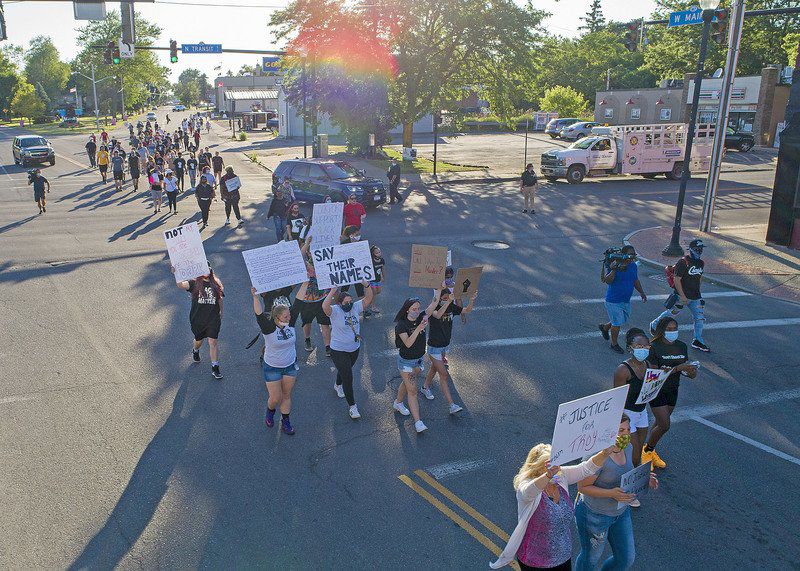 James Neiss/staff photographerProtesters cross North Transit Road as part of a Wednesday's march on the one-year anniversary of the death of Troy Hodge, the Lockport resident who died during a police encounter last year. 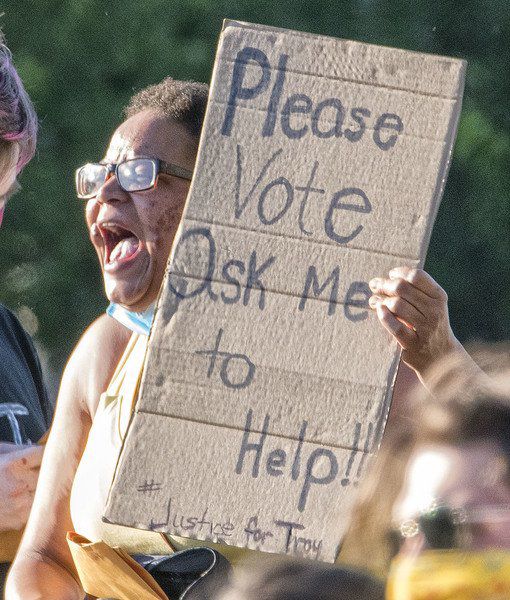 James Neiss/staff photographerProtesters rally one year at Lockport City Hall on the one-year anniversary of Troy Hodge's death following an encounter with police on June 17, 2019. 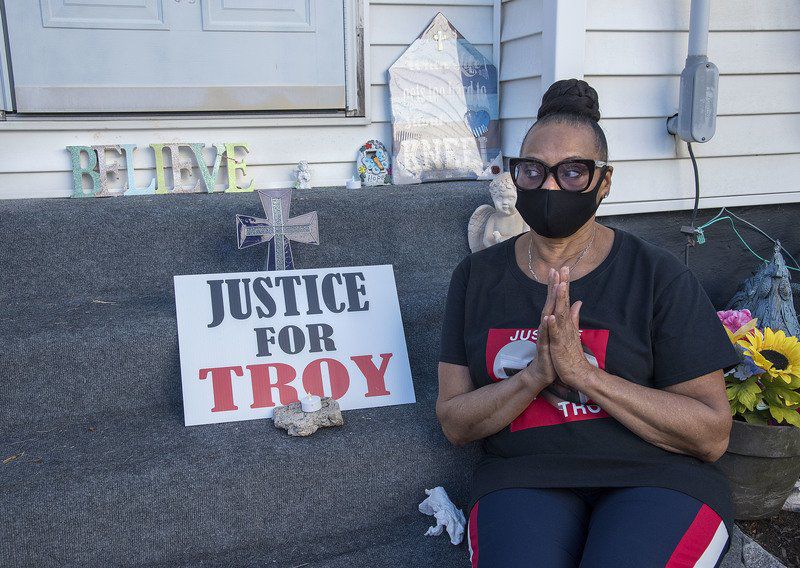 Troy Hodge's mother, Fatima Z. Hodge, praised all the supporters that came out to honor him on the one-year anniversary of his death. 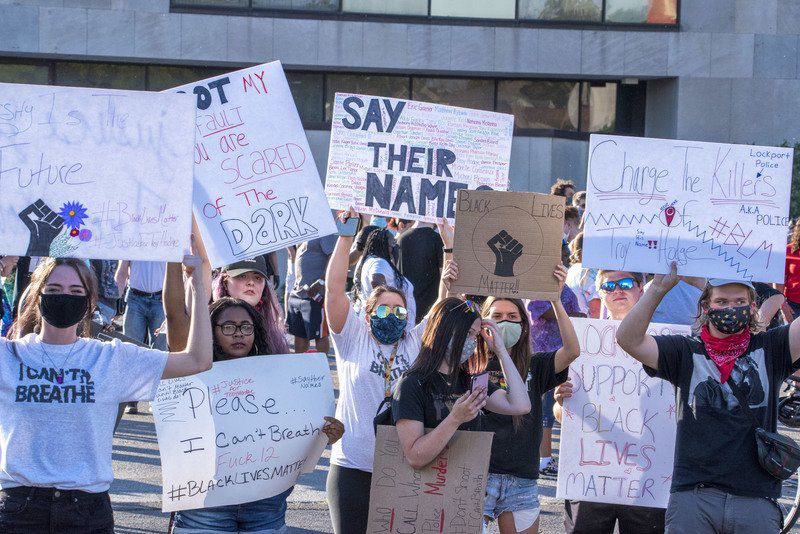 James Neiss/staff photographerMarching up Park Avenue, protesters seek justice for Troy Hodge on the anniversary of his death.

James Neiss/staff photographerProtesters cross North Transit Road as part of a Wednesday's march on the one-year anniversary of the death of Troy Hodge, the Lockport resident who died during a police encounter last year.

James Neiss/staff photographerProtesters rally one year at Lockport City Hall on the one-year anniversary of Troy Hodge's death following an encounter with police on June 17, 2019.

Troy Hodge's mother, Fatima Z. Hodge, praised all the supporters that came out to honor him on the one-year anniversary of his death.

More than 100 people gathered Wednesday evening to mark the passing of one year since the death of Lockport resident Troy Hodge following an encounter with police.

The vigil, which started out at the Park Avenue home of Hodge's mother on Park Avenue, included a period of reflection and prayer and a march to Lockport City Hall.

Hodge's mother, Fatima Hodge, who took part in the ceremony, spoke to the crowd and described her son as a man who loved to cook, go fishing and to "treat everybody right."  She encouraged young people in attendance to take advantage of their chance to bring about positive changes in Lockport and surrounding communities.

"There is a time and a place and a season for a change ... I'm telling you this is the time. Nothing comes easy, but you got a choice to make that change," Hodge said.

Fatima Hodge called Lockport police at 11:40 p.m. June 16, 2019 and reported that her son, Troy, was acting erratically. Officers arrived at her home at 217 Park Ave. where they said Hodge told an officer he was going to go into the house to get a gun. During the encounter with police, Troy Hodge suffered facial injuries and was Tased. After the encounter, he collapsed in medical distress. He was declared dead shortly after arriving at Eastern Niagara Hospital on June 17, 2019.

The matter remains under investigation by the New York State Attorney General's Office.

On Tuesday, Fatima Hodge and her attorneys filed a lawsuit against Lockport Police Department and a lawsuit against the four individual officers who were involved in the encounter with her son. The claim alleges that the force used by Lockport officers was unwarranted and accuses the city's police department of negligence in hiring, training and retention of the officers as well as wrongful death. The officers who were on the scene the night Troy died are accused in the lawsuit of excessive force, assault, battery, intentional infliction of emotional distress and negligence as well as wrongful death.

Thomas Burton, the attorney representing three of the four involved officers, has said that he does not believe any of the officers will be charged following the attorney general’s investigation. Burton has also previously indicated that there are no statutory, penal law or departmental policy violations to be found in the officers’ response that night.

During Wednesday's vigil, his mother pointed out that not all police are bad and that the community does need law enforcement. Unfortunately, she said, sometimes there are cops that turn out to be what she described as "bad apples."

"We need the policemen because they are going to protect us," she said.

Before Fatima Hodge finished, she made a point to "thank God" for Mayor Michelle Roman and the two hugged.

"Michelle is a good woman and I love her," Fatima Hodge said.

Roman delivered a passionate speech, saying she understands the devastating impact felt by any family that loses a loved one. She also encouraged residents to become more involved in the electoral process, suggesting it is one of the ways people can bring about real change.

"I have sons who struggle with some things sometimes and this could happen to anyone, and it doesn't matter who it happens to or when it happens," she said. "It's devastating when it does. I ran because I wanted to see change for our community. We need more people to run. We need more people that represent our entire community to get out there and run."

Roman said Troy's memory "needs to be about peace and positive change, and we need to do that for our entire community."

"If we can do that in his honor and in his memory that is a great legacy for him to have," she added.

"Always keep in mind you need to vote, you need to fill out the Census form. That money is based on how many people are in this area. That's how we get the money to be able to do what we need to do to help our community," she said.

At one point after the crowd arrived at Lockport City Hall, Desiree Crenshaw, Troy Hodge's stepdaughter, called for the officers involved in the incident on the night of Hodge's death to be fired.

Crenshaw implored the crowd to write letters and make calls to officials to bring about changes within police personnel. Crenshaw touched on the growing nationwide movement aimed at defunding police departments in favor of using funds to support other elements of the community like education and mental health care.

As multiple Lockport police officers attempted to restrain him while pinning him to the ground outside his mother's Park Avenue home, Lockport…