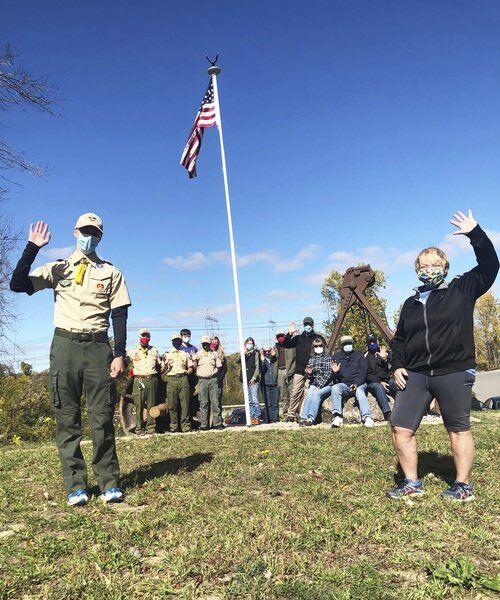 Andrew Hildreth, left, with trailkeeper Sandy Guzzetti, right, are pictured along with family and friends on Sunday at the Fisk Road entrance to the canal trail in Pendleton. 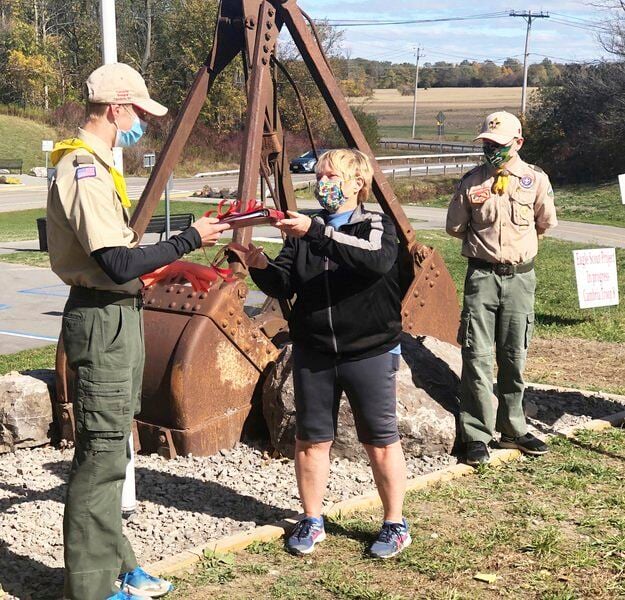 Andrew Hildreth, left, receives a special gift from trailkeeper Sandy Guzzetti, a book of pictures and other mementos from Andrew's Eagle Scout project to beautify the Erie Canalway Trail in Pendleton. At far right is fellow scout Evan Strong. 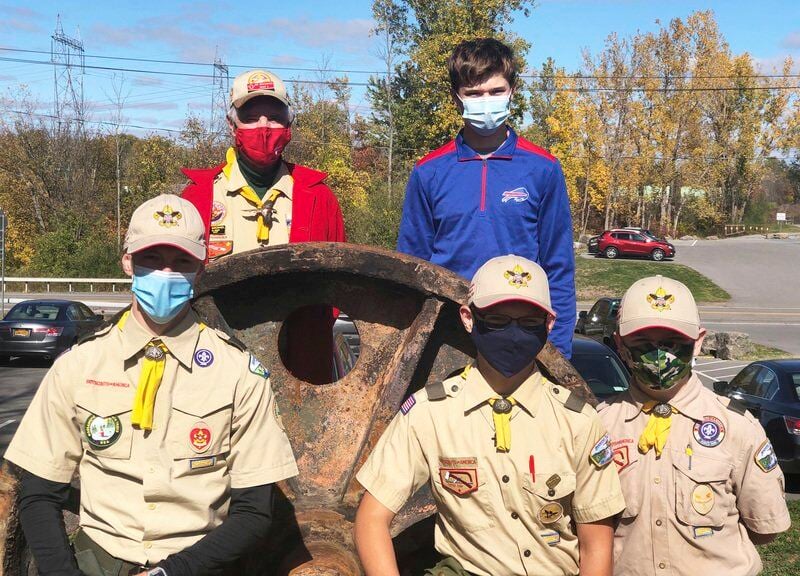 Andrew Hildreth, left, with trailkeeper Sandy Guzzetti, right, are pictured along with family and friends on Sunday at the Fisk Road entrance to the canal trail in Pendleton.

Andrew Hildreth, left, receives a special gift from trailkeeper Sandy Guzzetti, a book of pictures and other mementos from Andrew's Eagle Scout project to beautify the Erie Canalway Trail in Pendleton. At far right is fellow scout Evan Strong.

PENDLETON — Many unique and historic artifacts along the Erie Barge Canal that have been resurrected from “The Graveyard” have got quite an extensive facelift in recent weeks — thanks in part to the ambitious efforts of a 17-year-old Lockport High School senior.

“I thought this would be a good idea because of the field I'm going into in the future (mechanical electrical engineering) and because of the history behind these artifacts,” Hildreth said. “That got me engaged and that's how I got into it. I was excited to do it.”

The 1.9-mile-long Pendleton canal trail section — linking Fisk Road to Tonawanda Creek Road — was completed last year, becoming the final section in the state-wide canal trail system to open. Hildreth's efforts to spruce up the area included the creation of three art exhibits that utilize out-dated pieces of canal and locks equipment that were replaced and were being stored in the canal corp's temporary “graveyard” west of the Lockport Bypass.

Hildreth used his outstanding organizational skills to assemble a special team of volunteers, joining forces with Guzzetti and her volunteer crews and working together closely with the state Canal Corporation, they went to work earlier this year sprucing up the Pendleton trail section and the areas around the artifacts brought there.

“When they first started building this trail in Lockport, they were finding old artifacts along the way, so they had a section by the Lockport Bypass that they referred to as ‘the graveyard’ where they started putting them,” Hildreth said.

“They decided, ‘Let's put some artifacts on the trail so people have something interesting to look at.’ That's how some of the artifacts got here. The canal corporation brought the pieces over to this section and basically, we cleaned them up and created the gravel beds and timber borders around them. Signs are going to be put in next spring at each exhibit site as well, explaining the history of each artifact.”

Guzzetti said the three main art exhibits completed by Hildreth are as follows:

• About a half mile south on the trail at the East Canal Road overlook: lock valve spur gears and main valve shaft for lock culvert lift valve

Guzzetti said the trail stretch from Pendleton to Buffalo is the most heavily used part of the Erie Canalway Trail, with an estimated 350,000 annual visitors each year.

“We adopted the trail through the state's “Adopt a Trail” program and our goal was to make the trailheads visible and pretty and enjoyable and this is our fourth season of doing that,” she said. “We only adopted seven miles of the trail, but that's huge, and we now have 10 gardens planted.”

“We started by just doing the trail heads, but as the trail grew and we extended our reach all the way to the Stevens Street bridge in Lockport,” Guzzetti said.

Hildreth said he's had a tremendous amount of help and support along the way.

“After meeting my dad, Mrs. Guzzetti approached me to say she was looking for help with the trail to kind of clean it up and then it developed into a lot of new things involving the artifacts,” said Hildreth, who has excelled in cross country, swimming and tennis at LHS.

“I had a lot of people who came to help out. I'd like to thank my parents, Mike and Sandy Guzzetti, the canal corporation, other scouts and scout leaders who helped out, the Home Depot, Hildreth Electric of course and my grandparents, aunts and uncles,” Hildreth said. 

Beloved son of the late Francis "Curly" and "Peg" Bush of Lockport, NY. Tom was in the Navy, worked as an Electronic Technician, married Ann Bailey and had three children: Thomas II, Karen and Tyler. Tom was the youngest of four. He was preceded in death by brothers Francis "Sonny" and Richa…