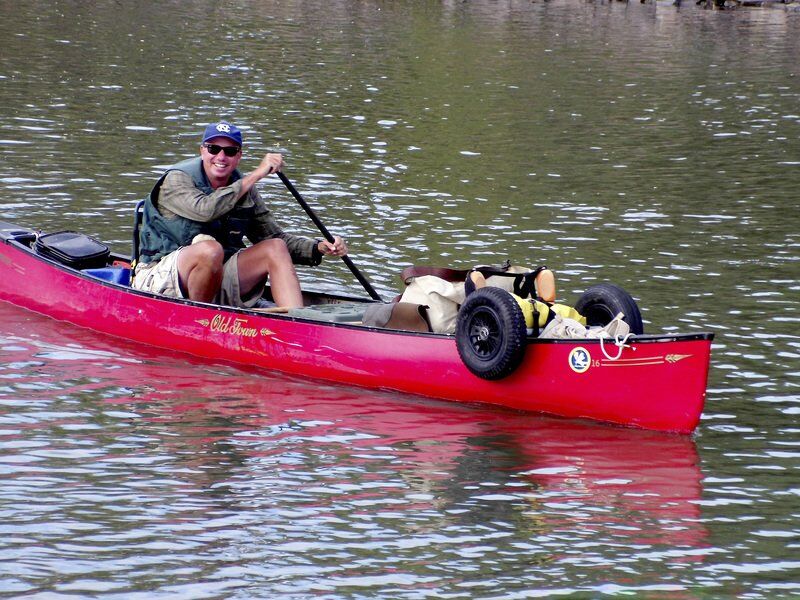 Neal Moore, a native of Los Angeles, paddles through Middleport on the Erie Canal this past Saturday afternoon, on his canoe voyage from Oregon to New York City. Moore was locked through at Lockport earlier in the day. (Virginia Kropf / contributor) 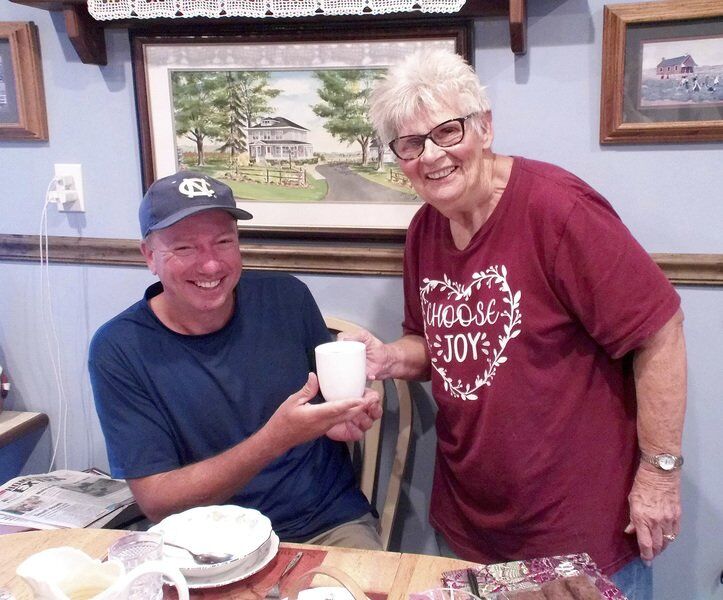 Cross-country canoeist Neal Moore gets a cup of coffee from Pat Fox, owner-operator of Gardenview Bed and Breakfast in Medina, after camping outside the B&B on Saturday night. (Virginia Kropf / contributor) 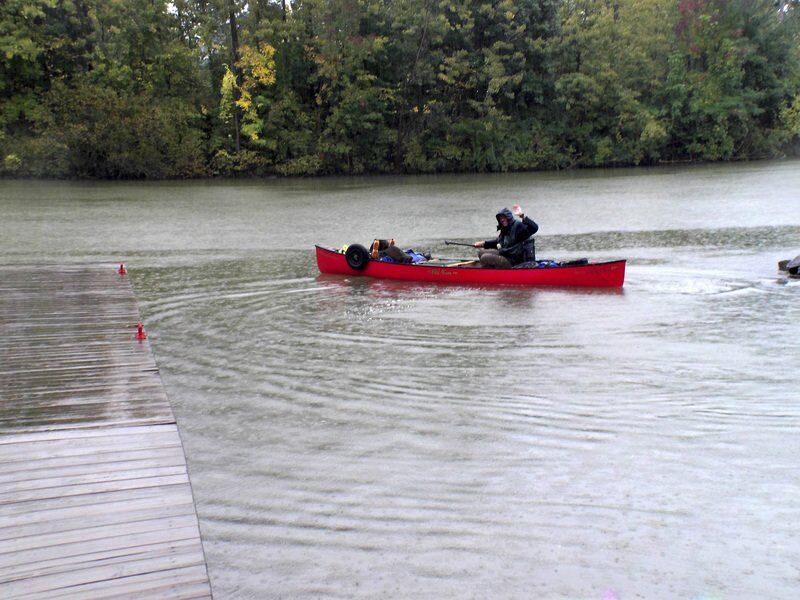 Neal Moore, a native of Los Angeles, paddles through Middleport on the Erie Canal this past Saturday afternoon, on his canoe voyage from Oregon to New York City. Moore was locked through at Lockport earlier in the day. (Virginia Kropf / contributor)

Cross-country canoeist Neal Moore gets a cup of coffee from Pat Fox, owner-operator of Gardenview Bed and Breakfast in Medina, after camping outside the B&B on Saturday night. (Virginia Kropf / contributor)

MEDINA — The first time Neal Moore climbed into a canoe he was 12 and he did it to get a merit badge in Boy Scouts. He was 38 before he paddled a canoe again and it was at the headwaters of the Mississippi River in Minnesota. And it was enough for him to know that was the way he wanted to travel when he decided to cross the country from Oregon to New York City.

First, Moore said, canoeing is the original mode of transportation in this land, and rivers and waterways are the first thoroughfares.

“It is a unique way to travel and it makes for an interesting and challenging way to see the country,” he said.

Moore was born and grew up in Los Angeles. His childhood was traumatic, he said. He was 16 when his 13-year-old brother died and his mother became very sick while he was young.

“My mother wanted me to be a missionary, and I’d do anything for her,” he said.

So after studying a semester in Hawaii and graduating from high school, he moved to South Africa. His mother died the first month he was there.

“I learned when you push yourself out of your comfort zone you grow and learn,” Moore said.

After two years as a missionary, Moore next continued his education at the University of Utah, where he got a degree in English literature and film theory. He worked in Hollywood with Jim Henson for a while, then he sold all of his possessions and moved into the world at large. He has gone back to South Africa every year for 30 years, and he now gets his mail in Cape Town, South Africa, and Taipei, Taiwan.

“I took a job when I needed to pay the rent,” he said. “My father cut me off a long time ago. He said, ‘You’re not getting another penny for the rest of your life.’ When you are on your own, every failure is yours, but also every success is your own.”

Moore is a journalist and book author. He also works with American relics and old books and photos.

When the urge to travel hit him, he began to fantasize about where he wanted to go.

“Then I thought, ‘What if I came home?’ I want to experience America up close,” he said. “I’m looking for the blend between nature and community.”

Moore launched his first expedition in 2018 and made it 1,800 miles up the Columbia and Snake rivers to North Dakota. At the time, he said, the Spokane River was experiencing a 20-year flood. His canoe tipped when he hit downed trees in the glacial and cold St. Regis River, and he lost a lot of gear.

“I hung up my paddle, but I did not give up,” Moore said. “It was a pause, and that was a wonderful place to come back to. However, a friend said I would have to start over at the beginning.”

So in February 2020, Moore launched again from Astoria, Ore. Oregon was the first state to shut down when the COVID-19 pandemic hit, and Moore cleared it 30 minutes before the governor shut it down. When he got to the tri-cities of eastern Washington, that state also had been shut down, but the governor gave people 48 hours to get their homes in order, then they had to shelter in place. Moore contacted the Army Corps of Engineers, which gave him permission to paddle up the Snake River. He also got permission from the Nez Perce Native American tribe to cross their land and he made it up the Snake River and into Idaho.

“By the time I got to Bismarck, North Dakota, all hospital beds were full,” Moore said. “We were five months into the pandemic and it was fully around me. But the best place to be was out of doors, alone, camping in the wild and in a canoe.”

He said his home was his tent, his canoe and the expedition, so sheltering in place meant continuing his journey.

“I’ve been traveling ever since,” he said.

Moore's journey has taken him to the last of 22 states on his list, New York, and when he reaches the Hudson River, it will be the 22nd waterway and the end of a 7,500-mile adventure.

On his website, 22rivers.com, Moore lists as obstacles river traffic, from pleasure boats to container ships and oil tankers; far too many locks and dams, including Lockport; rapids and eddies; sunken rocks, submerged trees and freak waves on major lakes; and the open sea.

He experienced the waves just a few days ago on Lake Erie. He had met up with a mutual acquaintance, an experienced kayaker, who was accompanying him in the lake. They encountered rough waves and as they were trying to go ashore south of Buffalo, a giant wave wedged them under the canoe. Fortunately, another large wave came along and loosened the canoe enough so they could get free.

After a brief stay in Buffalo with fellow canoe enthusiasts, Moore made it to Lockport, where Jane Jacobson of Buffalo joined him in her kayak for the trip through the locks and along the Erie Canal to Medina. Jacobson had met Joe Martillotta of Albion when he owned the Crooked Door and she made a stained glass panel for the front of his building. Joe and his wife Debbie came and got Jacobson at Gardenview Bed and Breakfast and took her to Lockport to get her vehicle, then they offered to host Moore this past Sunday night.

Moore had previously contacted Pat Fox of Gardenview to stay on Saturday night, but her rooms were booked, so she gave him permission to pitch his tent in her yard.

On Sunday morning, Moore got a resident-guided tour of Medina, the culvert, St. Mary’s Archer’s Club, Lake Ontario (which he had never before seen) and Medina Railroad Museum. Then he was ferried to the Bates Road boat launch, where he set off on the canal in pouring rain for Albion, where the Martillottas met him.

During his journey, Moore snacks during the day and if there is not a restaurant nearby at night, he eats freeze-dried meals that he has carried with him.

He has a set of wheels in his canoe, and where he cannot paddle, he pulls the canoe. After leaving Albion and paddling east on the canal half of the way, he will pull the canoe onto the towpath 170 miles to Albany. He will be on the towpath from Oct. 15 to Nov. 15.

“By making this trip, I’m looking for the common ingredients of who we are,” Moore said. “I’m attempting to explore how waterways connect from sea to shining sea. I may be traveling solo, but I’ve made so many new friends and other new friends are just around the corner.”

It is Moore's goal to approach the Statue of Liberty from what he calls the “wrong side,” meaning from the west, whereas the immigrants who came to this country approached it from the east.

“Each individual I’ve met along the way is a thread and when you add them all up and I end up in New York City, I’ll have woven a tapestry of American people.”

“The most beautiful sight will be the Hudson,” Moore said. “That will be my 22nd waterway and it is going in my direction.”