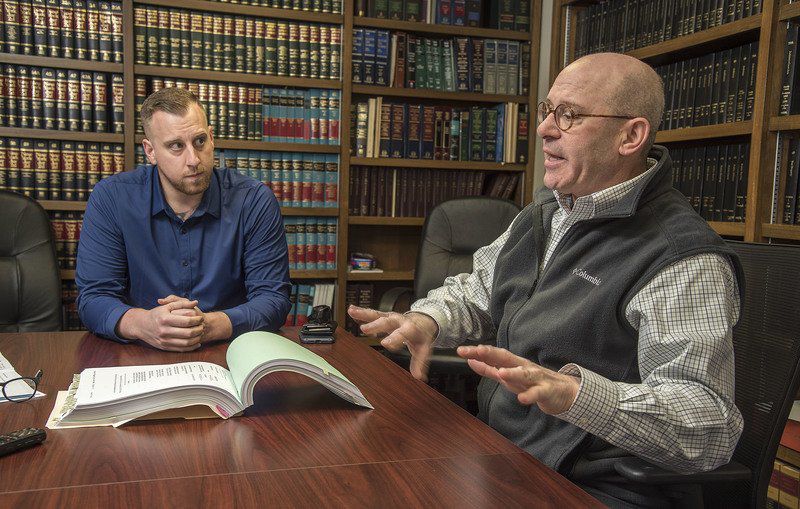 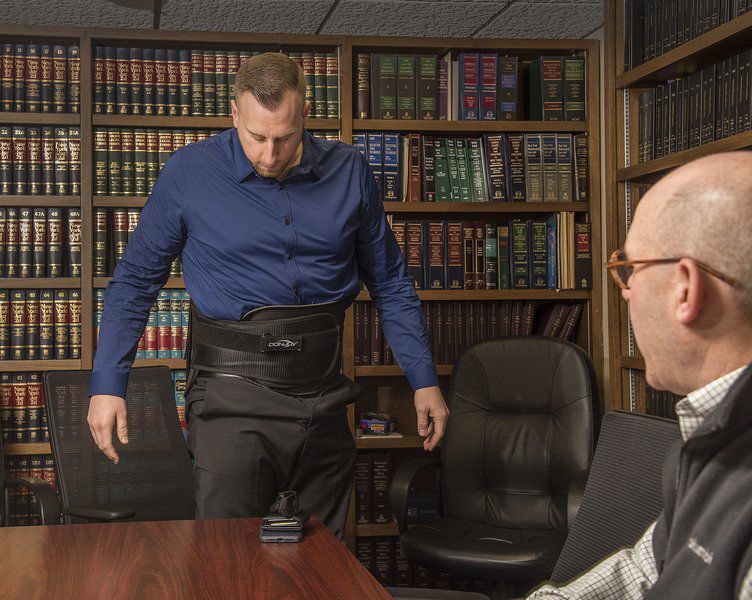 James Neiss/staff photographerFormer Lockport Police Officer Mark Wallace showing off his back brace, talks about his lawsuit against the City of Lockport. He said he suffered a permanently disabling leg injury during police academy training. 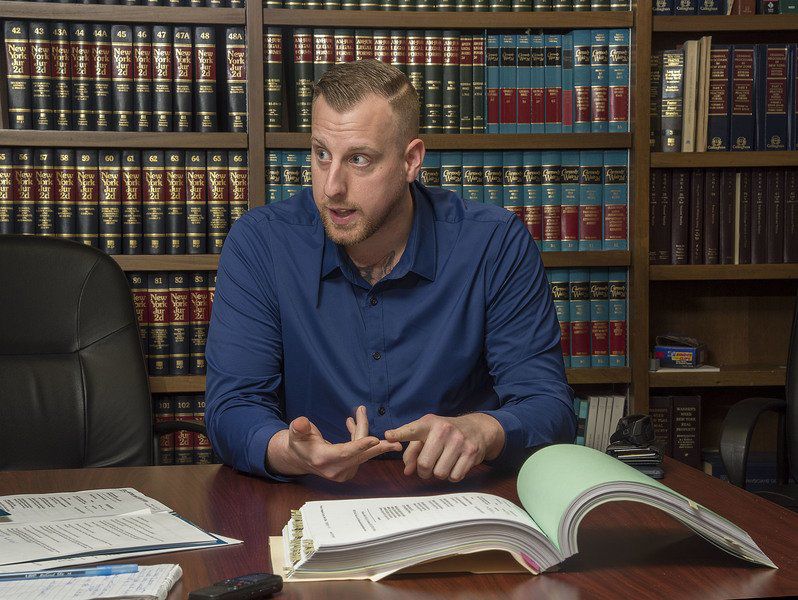 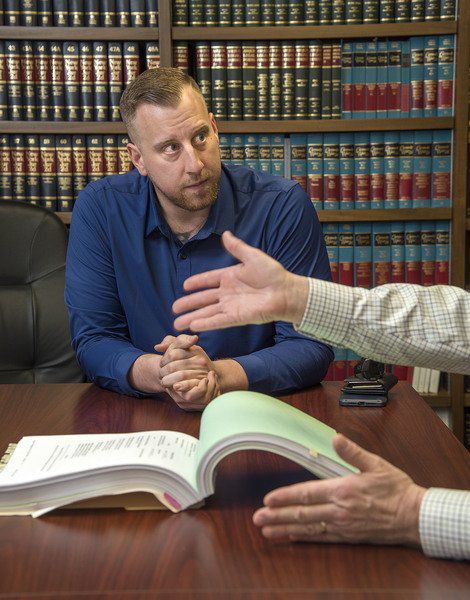 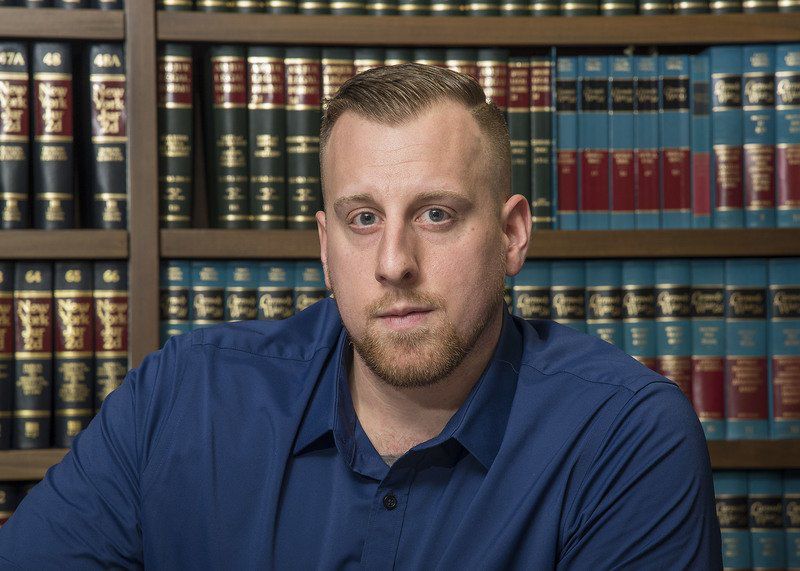 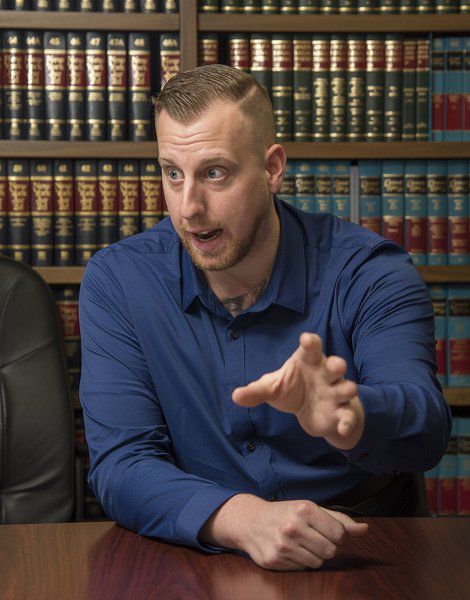 James Neiss/staff photographerFormer Lockport Police Officer Mark Wallace showing off his back brace, talks about his lawsuit against the City of Lockport. He said he suffered a permanently disabling leg injury during police academy training.

A former employee of Lockport Police Department is suing the city for denying his request for benefits awarded to officers injured in the line of duty, after he suffered a permanently disabling leg injury during police academy training.

Mark Wallace says he spent his whole life striving to become a police officer in the community he grew up in.

"I knew I wanted to be a police officer from a young age ... . For me, it was about I actually get to be a voice for the people who usually don't have one," Wallace said in a recent interview with the Union-Sun & Journal.

Wallace said he returned to Lockport after college to give back to the community that "raised him" and now he feels "like my city completely threw me under the bus and let me down."

Wallace's attorney, Paul Weiss, said Wallace was granted worker's compensation benefits and his lawsuit is about obtaining the benefits due to a police officer who's injured in the line of duty.

For several months, according to his lawsuit, Wallace had been dealing with the effects of an ankle injury and was not given the medically prescribed time to heal while he continued training.

A year after he was fired, Wallace applied for General Municipal Law 207C benefits (disability benefits for police officers) and was turned down. In an Aug. 29, 2019 letter, City Clerk Richelle Pasceri said his claim was denied because he had been terminated for cause, was not currently a city employee, had refused to sign forms and was employed in the private sector, and as a result waived his rights under general municipal law.

Wallace clarified that at the time of Pasceri's letter he was partially disabled prior to a surgery he underwent, and was only allowed to do desk work for a maximum of 15 hours.

Weiss disputes that finding, arguing that general municipal law extends to a probationary police officer who is injured and disabled in the performance of his duties even after his employment is terminated.

Michael Risman, special counsel representing the City of Lockport, said the city in response to the lawsuit denies that Wallace was terminated for any alleged injury.

Wallace sustained a left ankle injury during a training exercise at the Niagara County Law Enforcement Academy on Feb. 27, 2018. He sought medical treatment the next day, and was prescribed crutches and referred to an orthopedic surgeon. According to Wallace's suit, Dr. Frank Schlehr gave Wallace medical restrictions to gradually increase physical activity over a period of two to three weeks and LPD was informed of Schlehr's evaluation. Wallace claims in his suit that LPD leadership directed him to resume long runs and ignore the restriction.

Wallace's employment with LPD was terminated on July 6, 2018, after he did not finish a run in the required time limit.

About two month later, on Oct. 1, Andrew Cappuccino, M.D., determined that Wallace had suffered a consequential back injury connected to his left ankle injury, according to the lawsuit. He underwent spinal fusion surgery at Niagara Falls Memorial Medical Center in September 2019. The city's independent medical examiner also determined the same diagnosis, Wallace added.

Wallace and Weiss say he is totally disabled from work, and will never be able to become a police officer due to the severity of the injury.

"Now, I will have to make an entire life and career shift and likely need to pursue higher education to do so, which takes a lot of time and energy and money, as well as the emotional toll that all of this has had turning my entire life upside down," Wallace said.

A recent Buffalo News article, which cited four unnamed sources, seemed to suggest that Wallace's firing might have been the consequence of his relationship with a Western New York woman who served time in a Louisiana state prison for causing the accidental death of her then-boyfriend.

In response, Weiss told the US&J, that leak of personnel information "isn't even applicable to the case."

Asked why the information would be leaked, Weiss suggested, "because they want to change the story."

"He's a police officer. He's injured on duty. He's entitled to this. ... They want to create public sentiment against him," Weiss said.

Wallace noted her case is in the process of being expunged right now.

Mayor Michelle Roman told this newspaper she strongly discourages city officials from sharing confidential employee information, but that she is not sure what, if anything, she can investigate to determine who shared confidential information about Wallace.

The defendants in Wallace's suit are the City of Lockport, Lockport Police Department, City Clerk Richelle Pasceri, Mayor Michelle Roman, Police Chief Steven Abbott (who was not police chief during the time period) and the Common Council.