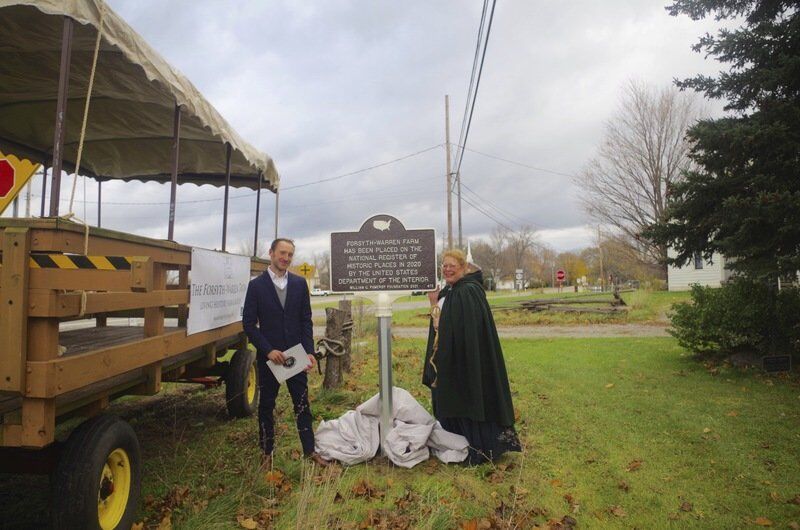 Photographs by Benjamin JoeThe Forsyth-Warren Tavern of Cambria, a piece of the Town’s early history as a center for the then-pioneer town, received a historic marker. Here Tyler Booth, owner of the property, and Bethann Roeling-Flynn, president of the board of trustees, unveil the marker 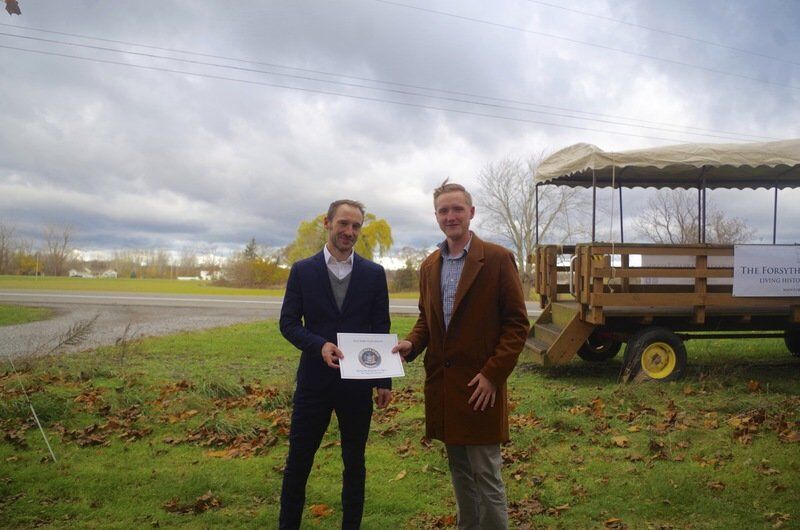 Photographs by Benjamin JoeThe Forsyth-Warren Tavern of Cambria, a piece of the Town’s early history as a center for the then-pioneer town, received a historic marker. Here Tyler Booth, owner of the property, and Bethann Roeling-Flynn, president of the board of trustees, unveil the marker

The Forsyth-Warren Tavern is believed to be one of, if not the oldest buildings in Niagara County, dating back to 1805. The building was originally owned by Mary and John Forsyth, and it spent a large period of time directly under the ownership of Mary Forsyth after she was widowed.

The marker represents the accomplishment of a longstanding goal of the current owner of the property, Tyler Booth.

“I’m just happy to see it happen.” he said, “It’s been a long time coming for this property.”

Several stories have come from the tavern, such as how during the War of 1812, refugees who fled Lewiston stopped at the tavern and tried to warn Mary Forsyth about the British. Risking her life and livelihood, Forsyth decided to stay and protect her tavern. She wouldn’t need to flee though, as the U.S. Army arrived to use the tavern as a makeshift base of operations. This was how Forsyth would meet her future second husband, Sgt. Ezra Warren of the Vermont Cavalry. Musket and cannon balls from this era can still be occasionally found around the area.

A particularly amusing legend about the tavern occurred in the 1820s after Warren moved in with his new wife, and helped to run the tavern. Allegedly after listening to an impassioned sermon about temperance from his minister, Warren took all of the alcohol from the tavern and dumped it in the community waste heap. Warren found out the next morning that pigs from a nearby farm had eaten food waste from the pile, became intoxicated, and were then drunkenly wandering around the area. When the community complained to him about this, he argued that the behavior of the pigs was much like their own behavior when drunk, making the case for his views on temperance.

The building and property would stay in the Warren family until the 1940s, when their line died out, and the land was inherited by a close family friend. Booth took ownership of the property in 2017, and since then he has been trying to make it into a living-history museum, and have it recognized as a historic landmark.

“When you really dive into it, it’s super easy to get lost in the complete depth and breadth of the history here,” he said.

Booth attributed the survival of the building itself to the sturdy Dutch craftsmanship, as it was aided in its construction by the Holland Land Company.

“We were fortunate enough that the building itself, being Dutch construction, it’s built like a brick house.” Booth said. “The building is an architectural gem.”

Booth is also expecting that there will be much more to do at the site in a few months.

“Once spring comes,” Booth said, “we’ll have more things to invite the community to the property, to get involved in the farm, and just get the place back to being a community center like it was meant to be.”

A certificate was also given to the Booth from the office of State Sen. Robert Ortt during Friday’s ceremony.

Booth is optimistic that the marker will aid the tavern in its roadside noticeability, and help accomplish its goal of once again being a fixture for the local community, and a preserved piece of local and national history. “This is our moment of having a real sign out there, permanently to designate to everyone going through the area, that this is a property that is not just historic for the town of Cambria or Warrens Corners, but for our nation’s history.” he said.