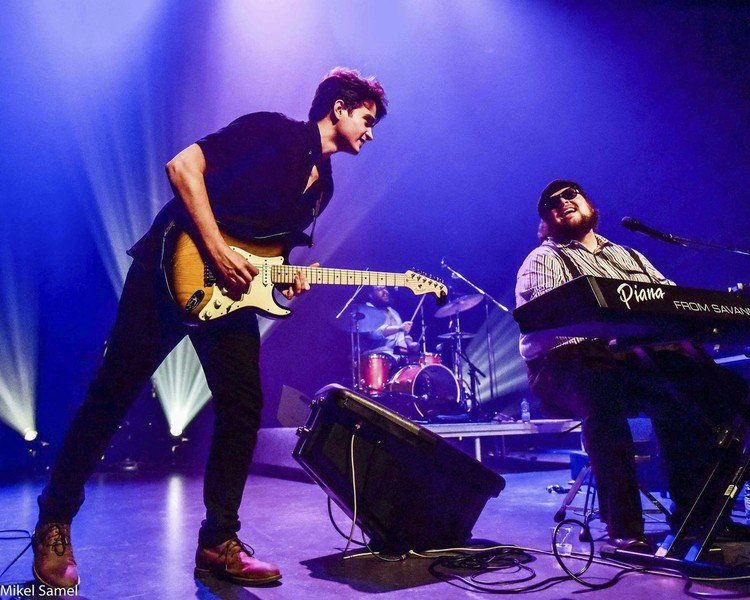 CONTRIBUTED PHOTOsGasport native Patrick Harrington, left, lead guitarist of Grammy-nominated Victor Wainright and the Train, is pictured on stage, along with fellow band members, drummer Bill Dean, in the distance at center, and Victor Wainright on keyboards at right. Not pictured is Train bass player Terrence Grayson. 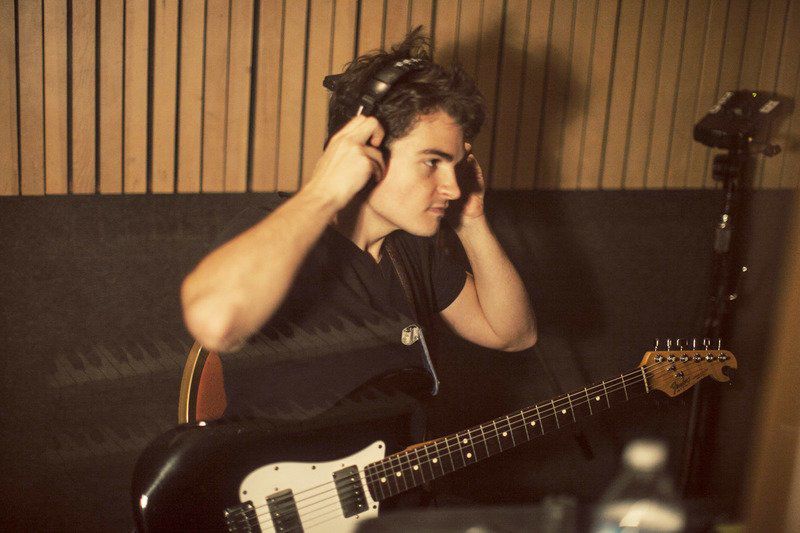 CONTRIBUTED PHOTOsGasport native Patrick Harrington, left, lead guitarist of Grammy-nominated Victor Wainright and the Train, is pictured on stage, along with fellow band members, drummer Bill Dean, in the distance at center, and Victor Wainright on keyboards at right. Not pictured is Train bass player Terrence Grayson.

To a young, aspiring musician looking to inspire others with his creative talents, nothing vindicates the decision to leave home, join a band, record an album and travel the globe more than a Grammy nomination.

Gasport native Patrick Harrington, at 27, has struck gold as the lead guitar player and trusted musical collaborator with Victor Wainwright and the Train — whose 2018 album by the same name is up for the prestigious Best Contemporary Blues Album of the Year Award at the upcoming Grammy Awards, slated for Feb. 10 in Los Angeles.

“I was sleeping back in Memphis, where I live with my fiance, Lydia, who was working. It was about 9:30 in the morning,” said Patrick, the son of Roy and Heidi Harrington of Gasport Road.

“I finally woke up because my phone was blowing up and I looked over at it and I notice that I’ve got all these missed texts and messages on Facebook and calls. My friends and family were all saying, ‘Congratulations!’ but no one said what for, so I was like, ‘Thanks. For what?’ “ Patrick said.

“When I found out, I couldn’t believe it, so I called Victor, who lives about 20 minutes away from me and he was sleeping (he likes to sleep in, too). When I finally got a hold of him, I was like, ‘Hey man, see any news today?’ He said, ‘No, what’s going on?’ and he thought it was bad news immediately, because why else would I be calling him before noon? I finally told him that our album got nominated for a Grammy and he couldn’t believe it.”

They immediately began recording their Grammy-nominated album in January of 2017 at famed Ardent Studios in Memphis (ZZ Top, Stevie Ray Vaughn), with Wainwright on keyboards, Harrington on guitar, Billy Dean on drums and Terrence Grayson on bass guitar as the core members.

“Before we even went into the recording studio, we were already really confident with the music,” Patrick said last week at his parents’ Gasport home. “Victor, everyone, was amazing. They had so much great insight, so, we knew pretty much exactly how we wanted the tunes to be.

Harrington said it took about a week to lay down the basic tracks at Ardent, along with the four core band members in Ardent’s “Studio A.” Also there were producer Dave Gross and engineer Mike Wilson. “Dave’s one of the most talented musicians I’ve ever met and just an overall amazing genius of a dude,” Patrick said. “It was a tight community (in the studio) and amazing crazy talent. It was so cool because it was my first real recording experience and to be doing it at Ardent with these incredible musicians, it was pretty mind blowing.”

Back home, news of the album’s Grammy nomination has struck the Lockport-Gasport area like a good snowstorm and that includes the historic Harrington mansion on Gasport Road, where Patrick’s proud parents and the extended Harrington clan are celebrating the news happily.

Roy and Heidi, especially, are vindicated by the fact that their unwavering support and encouragement to allow their guitar maestro son to pursue his musical dreams has helped pave the way for this moment.

Added Heidi, “How can you tell your child that you can’t go live your dream? That’s what he’s always wanted to do and we thought, ‘Well, maybe you should do something else. It’s not going to give you a lot of money (laughs),’ but he worked very, very hard at it and here he is.”

Harrington said some of his most memorable experiences at Ardent was looking around at the photos of the great artists of the past who have recorded there, including Stevie Ray Vaughn, brother Jimmy Vaughn, ZZ Top, The Allman Brothers, James Taylor and R.E.M.

“One of my favorite records, ‘Family Style,’ was recorded in the same studio, so that was cool,” Patrick said.

“We’d spend the whole day at the studio, 8 to 12 hours, order out or get some food after and talk about our plans for the next day.”

Patrick said his favorite among many tracks on the album is ‘Thank You, Lucille,’ the band’s tribute to the late blues great B.B. King.

“We were very lucky to have ‘Monster’ Mike Welch play guitar on the song. He’s a really good friend and one of my favorites. He sounds exactly like B.B. King and played a beautiful tribute to him on this tune.

Him and Victor go back and forth. Victor’s singing about BB and thanking Lucille, BB’s guitar, and Mike’s playing the part of Lucille, answering back. It’s pretty cool.”

Patrick said he won’t be able to attend this year’s Grammys, but will be doing what he loves most, playing out.

“We’re going to be playing on a blues cruise, so even though we won’t be able to make the Grammys, it’s cool because we’ll be out doing what we got nominated for in the first place — and working hard,” he said.

Next up for Victor Wainwright & the Train is a two-week U.S. Tour, beginning soon in Florida, then it’s the Blues Cruise Tour, the Grammys, more recording then they’re off to places like Barcelona on a European Tour that will take the band to Spain, France and Switzerland.

Not bad for a member of the Royalton-Hartland High School graduating class of 2009.

“I’m very lucky to be playing with someone who lets me be myself,” Patrick said.

“It’s what I always wanted to do — and to be able to make people smile. It’s a collaborative effort. It’s Victor’s band. He’s an incredible writer, especially with lyrics. He’ll bring the main ideas, then lets us bring it to life in what ever way that we feel. He’s very open to our ideas and us coming up with our own parts to play. It’s a really a fun process.”

Among Harrington’s many supporters is his fiance, Lydia.

“I thank my parents first because without them I wouldn’t be here, but they’ve let me pursue this dream my whole life,” Patrick said.

“And also Lydia for constantly supporting me. It’s not easy because  I leave all the time, but I think this nomination has been a validating experience. We’re all, like, ‘Okay, we’re on the right track.’ “

Victor Wainwright & the Train will perform at Buffalo’s Tralfamadore Cafe on March 28.

WHAT DOES HE PLAY?

National recording artist Patrick Harrington of Gasport, lead guitarist of Grammy-nominated blues band, Victor Wainwright & the Train, plays a Stratocaster, most of the time. “I’ve been branching out lately,” he said. “I love Tellys (Telecasters) and I want a Gibson, but I don’t have one yet. Maybe someday. And I play through old fender amps.”