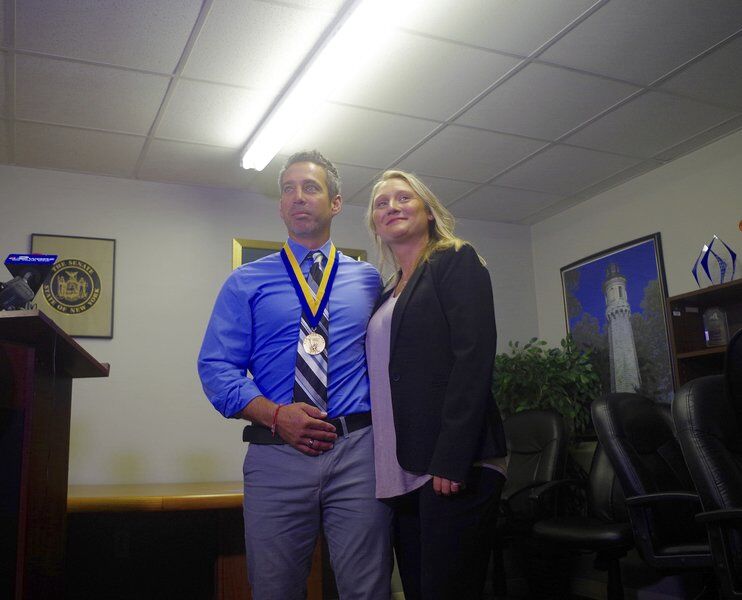 Ryan Suitor shows off his Liberty Medal with wife Diana at a ceremony where he was recognized for his heroism in saving a 2-year old's life in April. The Liberty Medal is the highest honor the New York State Senate can award. (Photograph by Benjamin Joe) 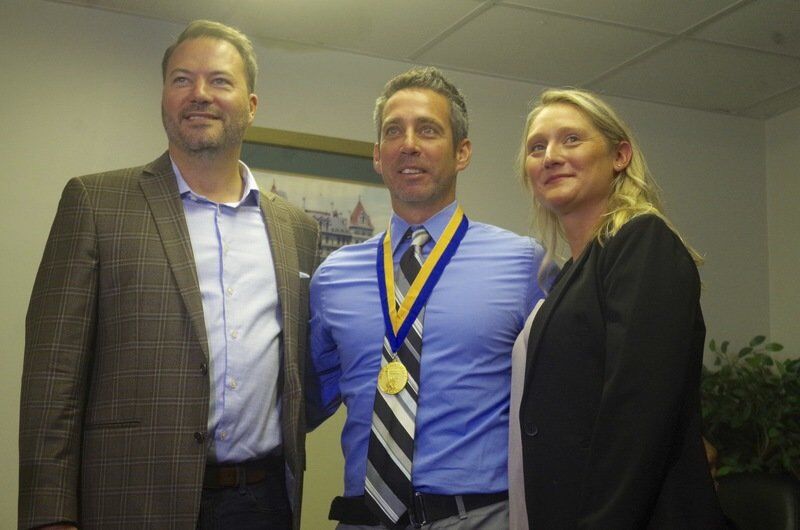 Ryan Suitor shows off his Liberty Medal with wife Diana at a ceremony where he was recognized for his heroism in saving a 2-year old's life in April. The Liberty Medal is the highest honor the New York State Senate can award. (Photograph by Benjamin Joe)

Ryan Suitor, a school counselor who serves autistic children at Orleans Niagara BOCES, was presented Tuesday with the Liberty Medal, the highest honor given by the New York State Senate.

It was on a Wednesday, April 21 that Suitor saw Susan Rosanski of Ransomville on the I-190 in Niagara Falls, holding her 2-year-old son Kasper who was suffering from a fever and had lost consciousness en route to Immediate Care and was turning blue.

“That day just happened so quickly,” Suitor said at a small ceremony with his wife, Diana, and State Sen. Rob Ortt.

“I was just coming home from BOCES and I saw her. She was screaming on the side of the road and I was on the other side of the highway. I drove over the median and pulled up next to her.”

For Rosanski, the entire day is also a blur. In a  phone interview with the US&J she shared the experience from her side.

"It felt really surreal,” she said. “You know you hear stories like that, but you don't expect it to happen to you. When he pulled up, honestly, a weight off my shoulders was lifted because it was just that somebody cared and it was nice to know there were people out there still like that.”

Suitor told Rosanski to get in the car and then he drove straight to Mount St. Mary’s where Kasper was treated and saved.

While Kasper was in treatment, Suitor was hit by another surprise. He found out that Rosanski’s husband was Greg Kent, a friend he knew in high school.

“Coincidently my oldest son is (also) in the same class as Kasper’s brother,” he added.

Rosanski said she remembered Suitor from helping around the school.

“We had seen each other, but there was no way we would’ve known we knew each other,” Rosanski said. “It’s a small town, but it was really crazy when he said he went to school with Greg.”

Rosanski went on to say that today she sees Suitor all the time.

“Our sons are in the same class and their friends, and my family is always super thankful, so they’re all friends on Facebook. It’s like we’re family. … He’s always been a real been a good-hearted person.”

Ortt compared Suitor to the heroes of 9/11, people who “sprung into action” when they were needed.

“Just coming off the 20th anniversary of September 11 we all remember heroes from that day,” Ortt said. “But sometimes you don’t have to look so far away. Sometimes heroes kind of hide in plain site, and Ryan, you are one of those, in a moment of time an ordinary regular citizen in Wester New York sprung into action and did something heroic.”

After saying this, Ortt presented Suitor a Liberty Medal, an award which recognizes regular people for doing extraordinary actions.

“It’s the state’s highest honor, presented to citizens who have merited special commendations for their actions on behalf of their fellow New Yorkers and their community,” Ortt said.

“There was a very good chance that Kasper wouldn’t be here with us if it weren’t for your actions,” he concluded.

Suitor now joins the ranks of Christopher Burke, who in July of 2015, a lifeguard who was on vacation in Westhampton who saved a woman from drowning, as well as, Patrick Hinchy, Richard Montgomery Jr. and David Brown who rescued a teenager from an overturned burning vehicle in December of 2016.

Suitor helped maintain some perspective of his status as, ‘a hero.’

“I’m thankful for being there at the right moment, at the right time, but there were other heroes there that day … the hospital team was right there,” he said. “I stayed until the nurse came out and said he was breathing.

“And then I went home and took my kid to the park.”