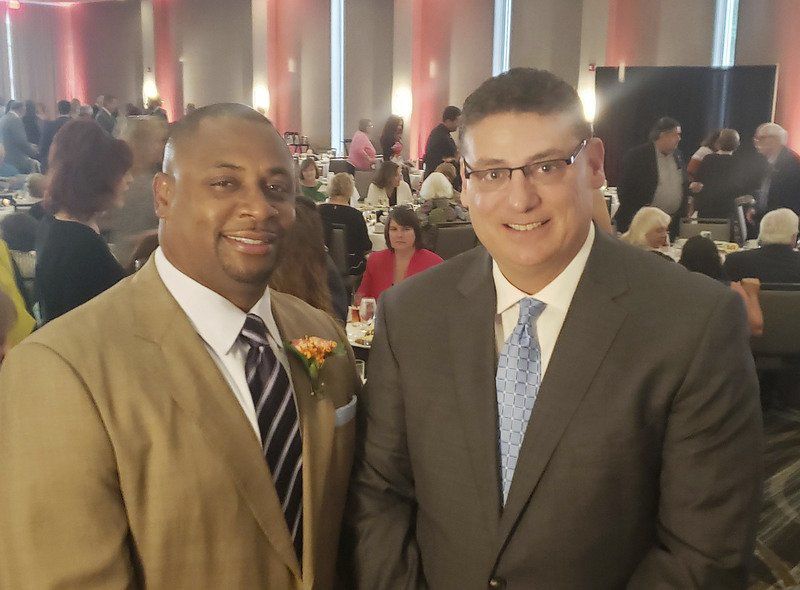 Michele DeLuca/staffTroy Vincent, the executive vice president of football operations for the NFL, standing with Niagara County Sheriff James Voutour, was honored as the Y’s 2019 Hero of the Year during Tuesday night’s annual YWCA of the Niagara Frontier’s Tribute to Women awards dinner.

Michele DeLuca/staffTroy Vincent, the executive vice president of football operations for the NFL, standing with Niagara County Sheriff James Voutour, was honored as the Y’s 2019 Hero of the Year during Tuesday night’s annual YWCA of the Niagara Frontier’s Tribute to Women awards dinner.

They spanned the 10 members of the all-female Niagara County Sheriff’s Office Mounted Patrol Unit, two educators, an artist, two emerging leaders, a management specialist, a health and human services provider, a social change agent, a survivor of alcoholism and a survivor of sexual harassment who lost one career only to discover another. They were all joined by a pair of lawyers and an All-Pro football player turned NFL executive.

The YWCA of the Niagara Frontier’s annual Tribute to Women awards dinner looked to, in the words of one honoree, “aspire to inspire, before you expire.”

In welcoming remarks, state Lt. Gov. Kathy Hochul told the attendees that, “The Y’s story is my story.” Recalling how she entered politics after attending Y-sponsored classes to recruit and educate women candidates, Hochul said as a result of that experience, “I have a chance to see the people you help on a daily basis. I come here to be recharged and renewed that we have the ability to touch other’s lives.”

Receiving the YWCA’s Hero Award was former Buffalo Bill Troy Vincent, the executive vice president of football operations for the NFL, who said he was “uncomfortable” with the honor.

“The women are the real heroes,” he said. “I’m just trying to do my part. I made a commitment and I’m keeping it.”

Vincent, considered a national leader in the fight against domestic violence and sexual assault, has championed the message that men of all ages need to take responsibility for their actions and confront the abuse of women.

“(Domestic violence and sexual abuse) are men’s issues,” he said. “Until we change the way we see and value women, these crimes will continue.”

And Vincent expressed some frustration that domestic violence remains a crisis in America.

“The numbers haven’t changed,” he said. “This room should be filled with men. More facilities (for abused women) are being developed every day. We address the problem, we don’t need these facilities. The work continues.”

Alejandra Castillo, the CEO of YWCA USA, the event’s keynote speaker, said she spoke with Vincent over dinner and agreed with him that the challenges women face “can feel daunting.” She said that made the Y’s work in its communities all the more important.

“Not all YWCAs have swimming pools,” she said, “but we help women when they’re drowning.”

“The Y has been a friend of the Zuccos for years,” Richard Zucco said. “And the easiest way to do good, is to support the YWCA.”

The Art Award was given to Terri Filips Vaughan of Niagara University, the Health and Human Services Award to Patricia Shea with Niagara Family Medicine Associates, the Management Award to Dawn Gilliam and the Social Change Agent honor was presented to Flora Hawkins.

The Y honored Kathleen Neville, a consultant who works closely with Vincent, with the Entrepreneur Award and presented its Frontline Award to Susan Potter from Wheatfield Commons.

Looking out at the honorees at the end of the dinner, Vincent said, “I think we’ve already heard from the heroes. My wife and I have been on this journey a long time. Let’s keep up the good effort.”