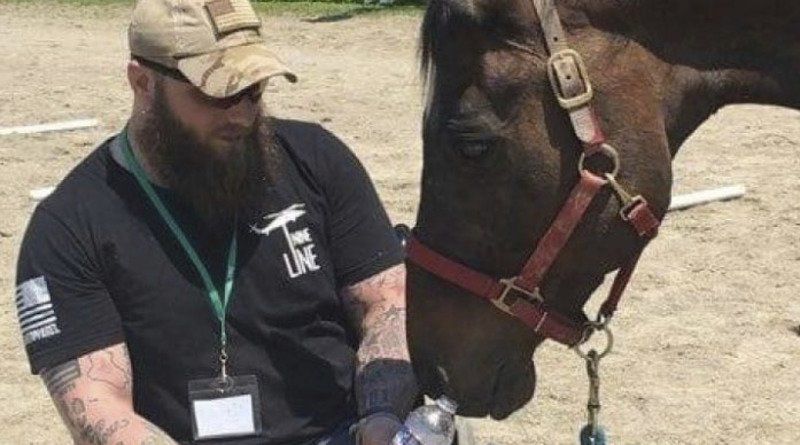 Contributed photoAn image of Matt Daniels from a GoFundMe effort to raise money for renovation of his Lewiston home to make it more handicapped accessible. The four-day old effort has raised nearly $4,000. 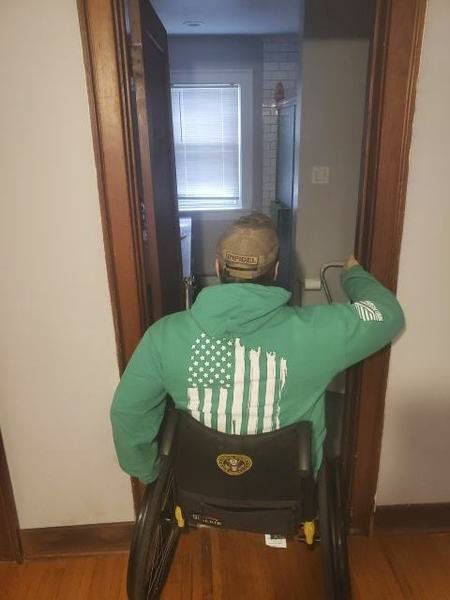 Mia Summerson/photoDisabled veteran Matt Daniels says his wheelchair is too wide to fit through the doors in his Lewiston home. Though he does have very limited use of his legs above the knee and is able to move himself in and out of rooms, it's extremely challenging.

Contributed photoAn image of Matt Daniels from a GoFundMe effort to raise money for renovation of his Lewiston home to make it more handicapped accessible. The four-day old effort has raised nearly $4,000.

Mia Summerson/photoDisabled veteran Matt Daniels says his wheelchair is too wide to fit through the doors in his Lewiston home. Though he does have very limited use of his legs above the knee and is able to move himself in and out of rooms, it's extremely challenging.

LEWISTON — Matt Daniels lives in a house that wasn't designed for someone who uses a wheelchair, but he's making do with what he has.

Daniels was injured by an IED strike while serving with the Army's 101st Airborne Division in Iraq, suffering extensive nerve damage in his legs. At first he was still able to walk, but over time, the ability deteriorated, leading to his use of a cane, then a walker, then crutches and eventually a wheelchair.

In 2015, his family bought a house in Lewiston. At the time, Daniels still had a bit more use of his legs, but as things got harder, he came to realize the house wasn't exactly built to the standards of the Americans with Disabilities Act. There's no convenient way for him to utilize many parts of his home.

"All the doorways in my house, they're not wide enough for me to fit into," Daniels said. "I have to park my wheelchair right up to the door and kind of lunge myself in and grab onto the bed or the cabinet."

This past Thanksgiving, Niagara Falls Councilman Ken Tompkins was approached by the K.I.A. Memorial Road March (KMR), a Buffalo-based veterans advocacy group. They were looking for local veterans who might need some extra help getting through the holidays.

Tompkins said he immediately thought of Daniels and his family, which consists of himself, his wife Kristin and their four children, 13-year-old Connor, 9-year-old Dominic, 5-year-old Kwani and 2-year-old Anna-Rose. He said he knew they were having difficulties and thought that they would really benefit from KMR's assistance.

While helping his family during Thanksgiving, and Christmas as well, Daniels said the volunteers who were at the house with him noticed that he was having a difficult time getting around and they wanted to find a way to help.

"We saw that he couldn't get into his bedroom, or his kitchen or even all the way into his bathroom," recalled Tompkins. "And we said 'We have to do something about this."

Tompkins has teamed up with local nonprofit organizations, businesses and private citizens to form Hands Helping Heroes, an organization that will aim to help Daniels and other veterans with disabilities. Those involved include 2 Guys Construction and Nickel City Dolls.

A GoFundMe campaign was also launched with a goal of $45,000. As of Tuesday afternoon, when the campaign was just a day old, more than $3,000 had already been raised.

"It's overwhelming in a great way," Daniels said. "I didn't ask for this, but it makes me feel great about living in this community and being surrounded by such great people."

Tompkins said there are a lot of major changes the house needs in order to be fully functional for someone who uses a wheelchair. He said two of the biggest things will include turning his bathroom into a "wet room," with ceiling-to-floor tile and a floor drain that will allow the whole room to get wet, making it easier for Daniels to maneuver in and out.

The other big issue will be either finding or building cabinets designed with Daniels' needs in mind. Tompkins said the needed type of cabinets can't be easily purchased from a home store. He encouraged anyone with knowledge of a contractor who might be willing to donate the appropriate cabinets to contact him at 940-7092.

"My biggest hope is that we can find somebody to get the cabinets," Tompkins said. "The more we get donated, the less we have to raise."

An addition fundraiser has been organized for the project. A one-time benefit will be held from 11 a.m. to 7 p.m. March 7 at American Legion Cadille Post, 752 E. Market St., Niagara Falls.

Daniels thanked the many people who have come together to help adapt his home to meet his needs. He said he has been amazed by the amount of outreach he's received since his story became public, from friend requests on social media to messages about how to make donations.