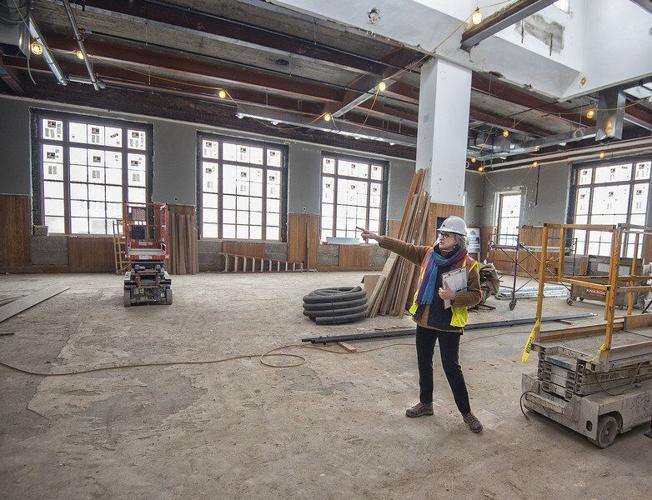 Project Manager Monica MacKay, with ISKALO Development Corp., shows off ongoing remodeling work at the old Lockport Post Office. The Historic Post Office on One East Avenue is being renovated to its former glory by the Iskalo Development Corporation. The project is required to adhere to the original floor plan, as much as possible, to use historic preservation tax credits. 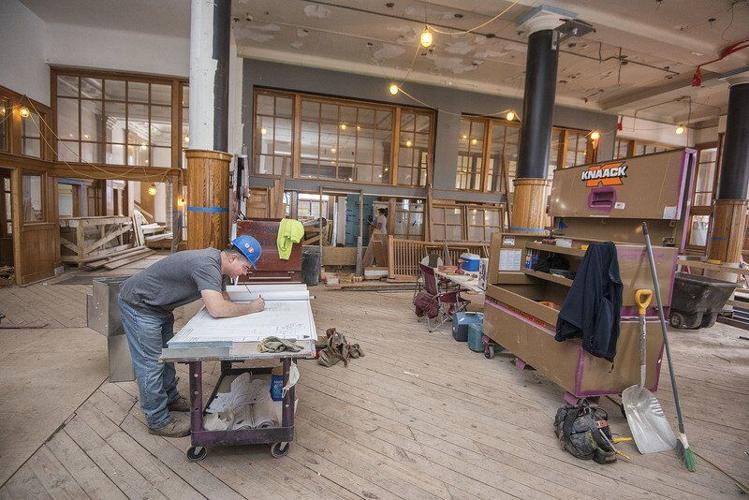 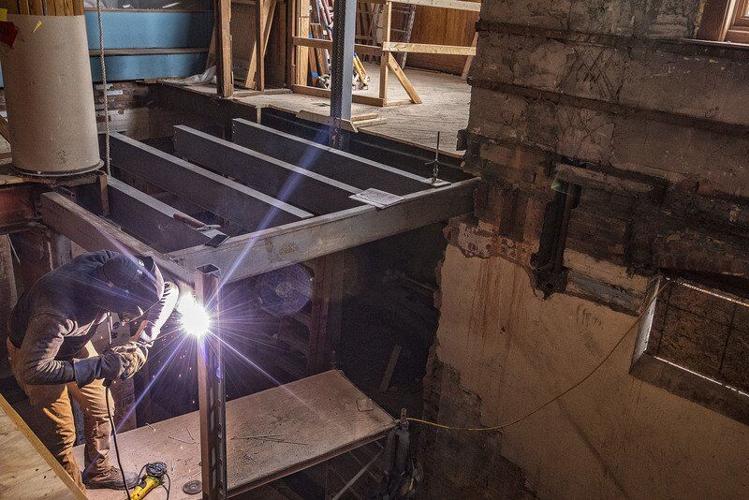 The Historic Post Office on One East Avenue is being renovated to its former glory by the Iskalo Development Corporation. 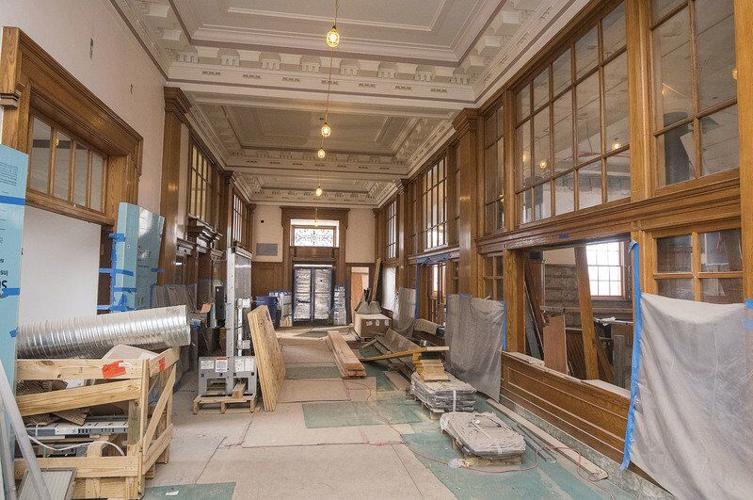 Much of the historic elements are still in place, like the ceiling moldings as remodeling continues at the old Lockport Post Office.

Project Manager Monica MacKay, with ISKALO Development Corp., shows off ongoing remodeling work at the old Lockport Post Office. The Historic Post Office on One East Avenue is being renovated to its former glory by the Iskalo Development Corporation. The project is required to adhere to the original floor plan, as much as possible, to use historic preservation tax credits.

The Historic Post Office on One East Avenue is being renovated to its former glory by the Iskalo Development Corporation.

Much of the historic elements are still in place, like the ceiling moldings as remodeling continues at the old Lockport Post Office.

Different properties in the city’s downtown, such as the Historic Post Office, the Tuscarora Club on Walnut and even an old bowling alley formerly known as Kendzie’s, are being renovated or are slated to be within the year.

Funding for the projects came from many places, including historic preservation tax credits as well as state grants pursued by the Greater Lockport Development Corp. to give incentives to buyers looking to renovate the jewels and gems of the city’s landscape.

The final result, said Brian Smith, president of the GLDC, is an ongoing process of maximizing the city’s potential and being able to see progress, not only in the downtown areas, but the entire city.

“Are we fully capitalizing on all our assets to have the greatest potential economic impact that we possibly can?” Smith asked. “I think when you break down that philosophy, I think you’re going to find that it’s never done. You’re always looking at what are the assets that we have right now and, ‘Are we fully realizing the potential that this asset gives us?’ ”

Smith gave examples of the Historic Lockport Palace Theatre and the Flight of Five Locks area along Canal Street as “assets” that have been reborn as attractions that bring more people downtown.

The GLDC purchased 13 West Main St., formerly Kendzie’s bowling alley and bar, for $100,000 in December of 2018. Funding through the Restore New York Communities Initiative pumped $300,000 into engineering costs for the building to make it “market ready.”

On Wednesday, developer Matt Martin said he should close on the building within two weeks and take possession of the 66-year old, 14,200-square foot building that has been vacant since 2001. Martin confirmed that he and his brother, CJ Martin, will be investing close to $1.85 million into the project and renovate to house apartments on the second floor while the first floor will be dedicated to a micro-brewery.

“Some work has been started,” Martin said. “Putting a new roof on and some other things.”

Martin is a Lockport native who’s been in real estate business for about 12 years. He said he loves old buildings.

At the YMCA, Martin said he envisions a co-work where professionals can have workspace on an as-needed basis.

Construction on Kendzie’s is started, but will ramp up in April of 2022, Martin said. The building should be complete by Jan. 1, 2023. Historic tax credits will be used for the former bowling alley, whose name will be changed.

Work on the YMCA should begin in May and should also be completed by January 1.

The One East Main Street Historic Post Office was opened in 1904 and listed on the National Register of Historic Places in 1989. It was purchased by Iskalo Development in 2015.

Iskalo Executive Vice President Dave Chiazza said that historic preservation tax credits will be applied to the project and that renovations will need to meet National Park Service standards.

Smith agreed, saying that while all grants using public money are reviewed through the State Historic Preservation Office (SHPO), the properties using the tax credits are held to higher standards.

“Nothing is done that hasn’t been signed off by SHPO,” he said. “Just because you’re not using historic tax credits doesn’t mean you aren’t held to a standard to ensure that nothing is going to take away from the historic fabric of a property or community. … The benefit is so great with the actual tax credit, but the SHPO review is still (necessary). You’re not going to see any of these projects taking away from historical fabric.”

Chiazza said that the building will hold a variety of tenants, with just under 10,000-feet earmarked for boutique shops as well as a potential restaurant and artisan space.

Chiazza said Lockport is coming up on a high.

“Projects like the theater across the street from us, the Cornerstone Arena, our project. Those are the building blocks of place. Once you create enough critical mass, you have momentum. Once you have momentum it just builds on itself,” he said.

The project will be complete in late spring of 2022.

Dominic Ciliberto, head of DLC Diversified Holdings, LLC, bought the Tuscarora Club Building in 2018 for $230,000 from the GLDC and planned to make the 15,000-square foot building into a banquet hall and boutique-hotel spot, with rooftop patio. He believes there’s nothing like it in Western New York.

Partially funded by a $500,000 Restore New York grant and $800,000 in state Downtown Revitalization Initiative (DRI) funds, Ciliberto has also invested an additional $1.5 million. It should be noted that Ciliberto also received a 10-year Payment-In-Lieu-Of-Taxes agreement with the county, saving him $315,000 in property, sales and mortgage taxes.

Ciliberto estimated that the “T-club” event center will be open in summer and hotel rooms will begin opening in the next two years.

“I think we’re doing a good job preserving the bones until we move forward with the rest of the project,” Ciliberto said. He noted that final design approval is with SHPO before grant money becomes available.

“Once it’s all redone, it will be pretty easy to rent out,” he said. “As soon as we get the approvals back, we’ll submit for the building permit and start to put some of the rooms back together.”