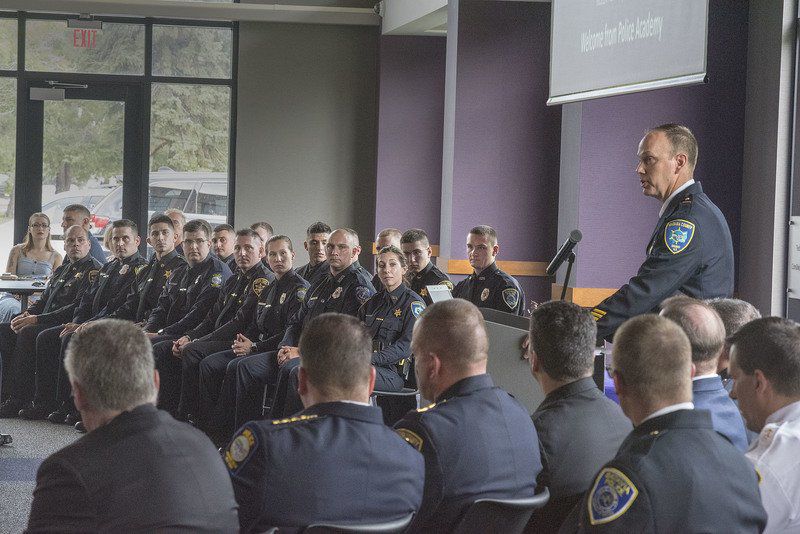 James Neiss/staff photographerThe Niagara County Law Enforcement Academy at Niagara University held a graduation ceremony where seven of the graduates will be serving at police departments in Niagara County.

James Neiss/staff photographerThe Niagara County Law Enforcement Academy at Niagara University held a graduation ceremony where seven of the graduates will be serving at police departments in Niagara County.

The graduation took place this week at Niagara University's Lewiston campus where the academy is located.

In a break from recent classes, 15 of the 16 graduates will immediately join local law enforcement agencies. The last few classes at the academy have featured a majority of pre-employment law enforcement graduates.

Jordan Collins and Amber Denman are joining the Falls Police Department and will help to fill current double-digit vacancies on the force.

"Absolutely," Falls Police Superintendent Tom Licata said. "And we can use a lot more (new officers). They're good kids and they worked hard at the academy. I think they're going to be good police officers for us."

Denman and Collins are now in field-training, which places them on patrol, on all three shifts, working with veteran officers to develop their street skills.

"Early indications are that we got a couple of good officers," Licata said.

The superintendent said another new Falls Police recruit is now training in the academy's 72nd class.

The class also included two new North Tonawanda police officers, a pair of new Niagara County Sheriff's Office deputies and one new officer each in the Lockport and City of Tonawanda Police Departments.

Niagara County native and Special Agent-in-Charge of the Buffalo Field Office of the FBI, Gary Loeffert, delivered the keynote address to the graduates.