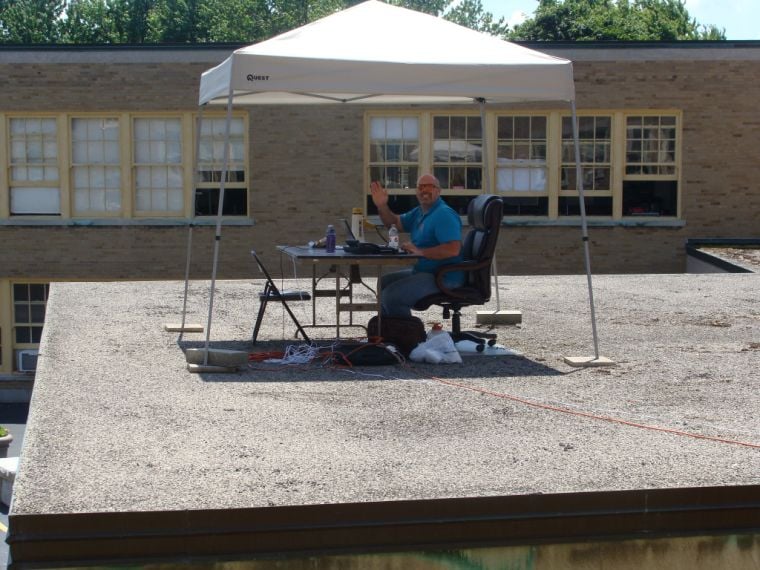 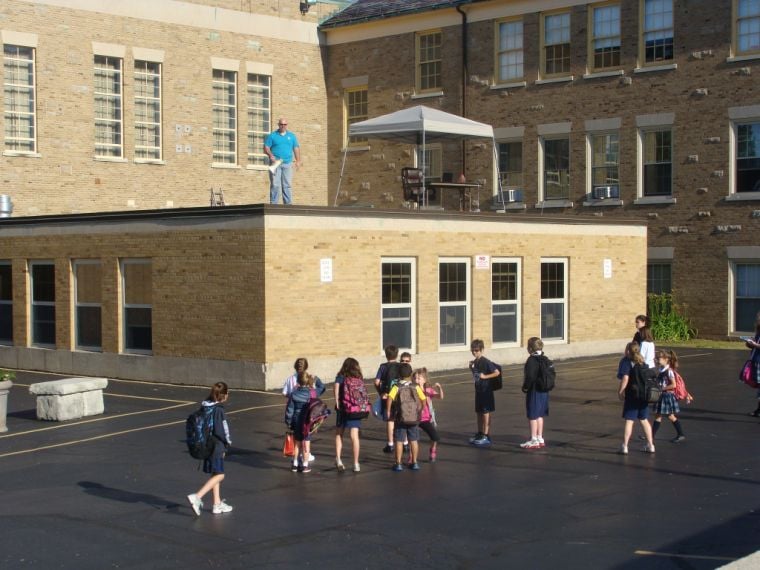 CONTRIBUTED PHOTO MAN ON A LEDGE: DeSales Catholic Principal Scott Fike overlooks a group of students as they arrive for school Thursday. Fike spent the entire day working from the rooftop of the school, the reward for students completing a school-wide service project. 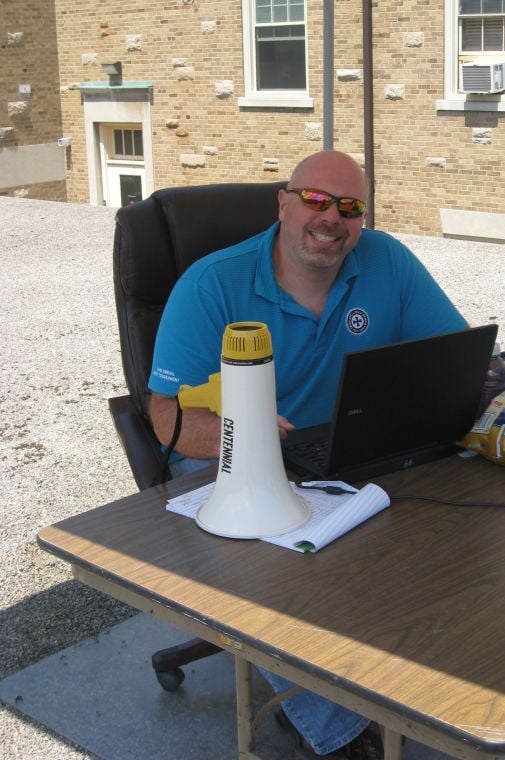 JOE OLENICK/STAFF AT WORK: DeSales Catholic Principal Scott Fike seated in his temporary office. Fike spent the entire day working from the rooftop of the school, the reward for students completing a school-wide service project. 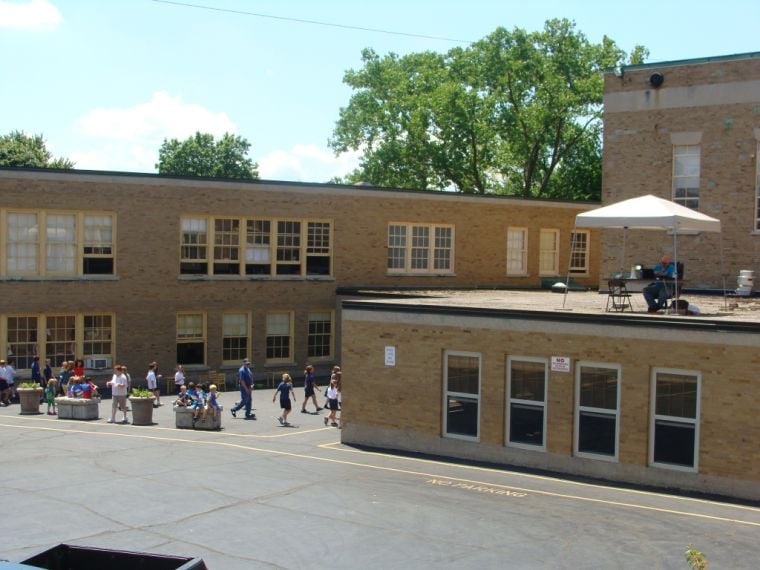 CONTRIBUTED PHOTO MAN ON A LEDGE: DeSales Catholic Principal Scott Fike overlooks a group of students as they arrive for school Thursday. Fike spent the entire day working from the rooftop of the school, the reward for students completing a school-wide service project.

JOE OLENICK/STAFF AT WORK: DeSales Catholic Principal Scott Fike seated in his temporary office. Fike spent the entire day working from the rooftop of the school, the reward for students completing a school-wide service project.

Scott Fike didn’t spend much time in his office on Thursday. But that doesn’t mean he was hard to find.

The principal of DeSales Catholic School spent Thursday working from the roof of the building, much to the delight of the school’s student body. The temporary relocation was a reward for the students’ successful community service project, which finished in early February.

Each year for Catholic Schools Week the kids at DeSales work on a school-wide service project. This year, the kids brought in items such as soap, toothpaste, deodorant, shampoo, shaving items and so on to be given to St. John’s Outreach Center on Chestnut Street. The goal was to fill 25 large boxes, then Fike would spend a day working from the roof.

So when they came to school Thursday, or went out for recess, the kids saw their principal waving from the roof.

“They were waving, parents were taking pictures, the kindergartners sang,” Fike said.

A colleague called Fike to see if he really was spending the day on the roof. Expecting to get his voicemail, the caller was surprised when Fike picked up, while still on the roof. A state trooper drove by, gave a confused look and drove off.

And the kids certainly enjoyed seeing Fike up there. Many walked by shouting, “Hi, Dr. Fike!”

“I was talking to the third-graders through that window,” he added, pointing to a wing of the school.

Fike was set up with a tent, a makeshift desk, his regular desk chair, phone and laptop. Maintenance Supervisor Rich Klee was able to run a power cord and phone line out to Fike.

The rules were Fike was confined to the roof until 3 p.m., but was allowed down for bathroom breaks or if an emergency arose. Fike said despite his location, he actually had more visitors than he normally does. And he was getting more work done.

”I like to wander and see what’s going on in the classrooms, but I can’t do that up here,” Fike said.

Michael Boron, the director at St. John’s Outreach, was very appreciative. He said the DeSales items went quick, about six weeks, even with St. John’s limiting what was given out.

“It’s always difficult to get enough of the things we need,” Boron said. “Our numbers are up, hygiene products are of need. They brought in a tremendous amount.”

DeSales is a strong supporter of St. John’s, Boron said, as each year the school does a number of events or drives to benefit the outreach center or the pantry. It is a benefit to DeSales as well, Boron said, because the kids learn to give to those who are less fortunate.

“I think it is really good at such a young age to be involved in community service,” Boron said.

And of course having a good incentive doesn’t hurt either.

“I’ve done goofy stuff before, but this is a first,” Fike said. “But I have no problem doing it if it gets them to do something good. We can be goofy, have fun, but let’s get something done too.”

Fike was positioned on the roof of the cafeteria, a section of the roof that is low enough to be seen by classrooms on the second floor. The rest of the roof was either slanted or was covered by the school’s solar panels.

One of the classrooms that could see Fike was Emily Crissman’s third-grade class. The kids could see Fike clearly, even having a conversation with the principal via the bullhorn Fike had brought up with him.

Early on during Catholic Schools Week, there were only nine boxes filled. Then the explosion came, the total jumped to over 25 boxes in one day.

“It was fun, we got to help others,” said third-grader Madison Abbott.

And upon seeing Dr. Fike on the roof all day? “I can’t believe he went up there.”