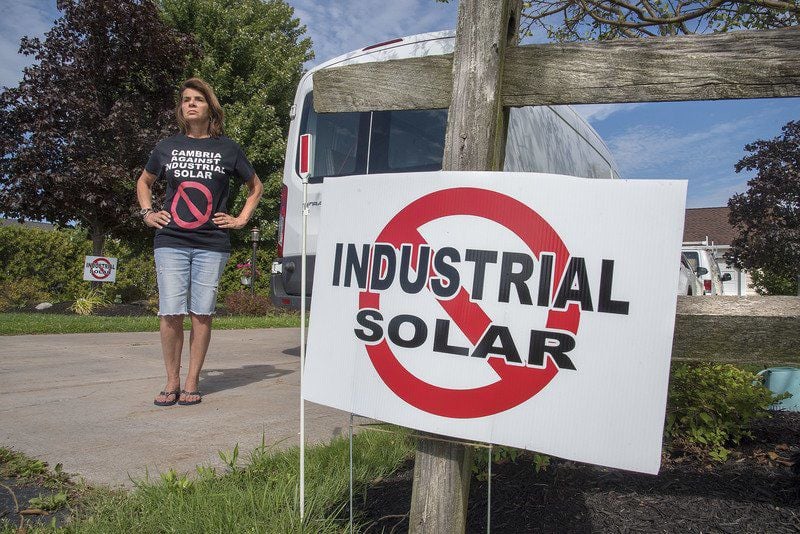 James Neiss/staff photographerSharon Tasner of Subbera Road said she and her husband bought their home a little over a year ago and, at the time, were not aware of a plan being undertaken by Cypress Creek Renewables to develop a large-scale solar project in the area. "I don't think we would have bought the home had we known," she said. 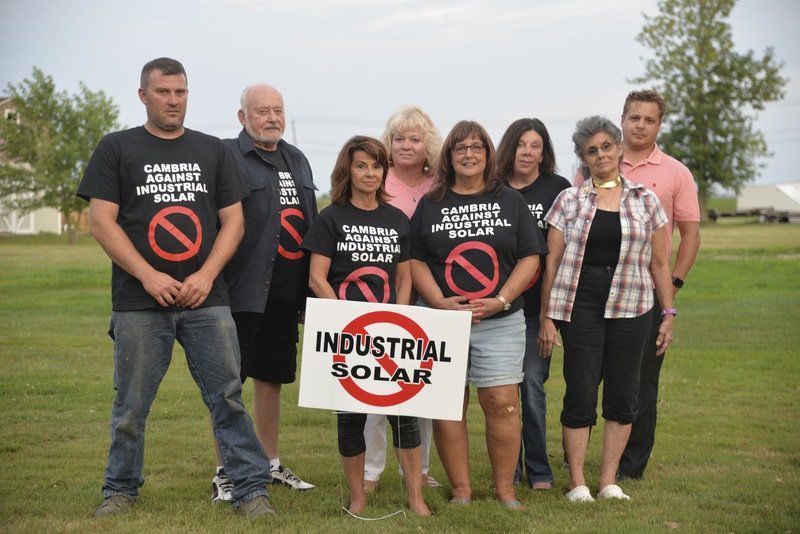 Connor Hoffman/staffMembers of Cambria Opposition to Industrial Solar have made T-shirts and lawn signs as part of their broader campaign to prevent a large solar farm from being developed in the town's of Cambria and Pendleton.

James Neiss/staff photographerSharon Tasner of Subbera Road said she and her husband bought their home a little over a year ago and, at the time, were not aware of a plan being undertaken by Cypress Creek Renewables to develop a large-scale solar project in the area. "I don't think we would have bought the home had we known," she said.

Connor Hoffman/staffMembers of Cambria Opposition to Industrial Solar have made T-shirts and lawn signs as part of their broader campaign to prevent a large solar farm from being developed in the town's of Cambria and Pendleton.

They come from different backgrounds and hold a wide variety of political beliefs.

The one thing they do have in common is a dislike for a plan that they fear could have a negative and long-lasting impact on the fabric of their community.

"We're regular Joe Shmoes," said Ed Saleh, one of more than 200 members of the group called Cambria Opposition to Industrial Solar. "We are Independents. We are Democrats. We are Republicans. It doesn't matter what party line we are. We're everybody. We're the forgotten people of New York state."

Saleh and dozens of his neighbors have banded together in an effort to stop the development of a 900-acre solar project which has been proposed by the company Cypress Creek Renewables.

Cypress Creek Renewables, a company with corporate offices in California and North Carolina, has proposed the Bear Ridge Solar Project, which involves the proposed leasing of 900 acres of private land throughout a 5,000-acre project area in southern Cambria and a portion of northern Pendleton. The developers plan to install solar panels mounted in rows on racking systems up to 12 feet high. The panels would be visible from a distance of about 1-1/2 miles, including from sites on Bear Ridge Road and IDA Park Drive in Lockport.

The grassroots opposition group began forming in May with initial meetings taking place at Cambria Town Hall before gatherings were moved to Cambria Volunteer Fire Hall to accommodate a growing number of participants.

The group's members - numbered at 240 to date - are now meeting weekly, according to member Susan Fischer.

Tasner said members are not against solar energy but rather against the company using land that isn't zoned industrial.

Tasner and her husband moved from North Tonawanda in an effort to scale down before they retire.

She found their current home in Cambria and loved the backyard and the view.

"I walked in this backyard and I had tears in my eyes because I thought it was the most beautiful sight I had ever seen - with the two decks, the land," Tasner said. "Imagine how we felt when we found out after we moved here that there was the possibility that across the street from us a huge solar farm may be put in."

The thought of it makes her "sick," she said.

Tasner and her husband had plans to put around $20,000 into their residence and that all stopped when they found out about Bear Ridge Solar.

"My husband said everything stops ... That's sickening," Tasner said. "It's very sad for us and there is not a day that doesn't go by that my husband and I aren't sad."

Karen Kurczynski, a Saunders Settlement Road resident, said that she would be exposed both in the front and backyard of her residence to the solar panels. Kurczynski worries about the impact the panels will have the environment.

"I feel the Lord has made this beautiful world, and we have a responsibility to take care of it," Kurczynski added. "It's going to make the land un-farmable."

Tom Gertz, a retired employee of Harrison Radiator, has lived in Cambria for about 60 years, and doesn't want to have his landscape drastically altered.

"When I get up in the morningm I want to see green," Gertz said. "I don't want to see brown or solar panels. The solar panels will be within eye sight on three sides of me."

"I have a 15-year business plan that exploded and I'm stuck," Westphal said.

Group members also feel like they aren't getting answers when they pose questions about the solar project to representatives from Cypress Renewables.

"They act like this is their first walk in the park," said project opponent John Soto.

Members of Cambria Opposition to Industrial Solar vow to keep fighting, saying they believe allowing the project to move forward will result in significant changes to their community.

Their efforts are likely to be impacted by Article X of the state Public Service Law, which puts a seven-member appointed board in charge of reviewing and permitting any electric generating facility that generates 25 megawatts or more. Host municipalities - like Cambria and Pendleton - can nominate four individuals for consideration as ad hoc members of the board. From that list, the state senate and assembly get the first opportunity to appoint one community member each to the board, and if the houses don’t do so within a given period, then the governor gets to appoint two members from the list.

According to state Sen. Robert Ortt, R-North Tonawanda, who represents Cambria and Pendleton, the senate and assembly leaders “failed to do their jobs” in timely fashion, meaning the responsibility now falls to Gov. Andrew Cuomo's office. During a visit to the Town of Wilson earlier this week, Cuomo expressed support for local representation on the siting board. As of this week, Cambria town supervisor Wright Ellis, said no action had been taken on the towns’ nominees.

In the event the governor also fails to appoint local representatives within a certain time, a quorum of the siting board’s five permanent members — governor’s appointees, all — may meet and make a decision on a power project, Bear Ridge Solar included.

While many may view it as a local issue, one that concerns only property owners in the towns of Cambria and Pendleton, Soto believes if Bear Ridge is successful, more projects like it will begin to pop up all across Niagara County.

Since the announcement of the Bear Ridge Solar Project last year, another project called the Ridge View Energy Center is being proposed to take up 2,000 acres in the Hartland and Newfane area.

"This is just the beginning," Soto said. "Cambria, New York is a testing ground for the rest of the state. If they get through and they do it here, it's going to be a solar onslaught because of Gov. Andrew Cuomo's ambitions and it's going to be going on farm land from here to New York City. Because that's the only places they can put it on a large scale."