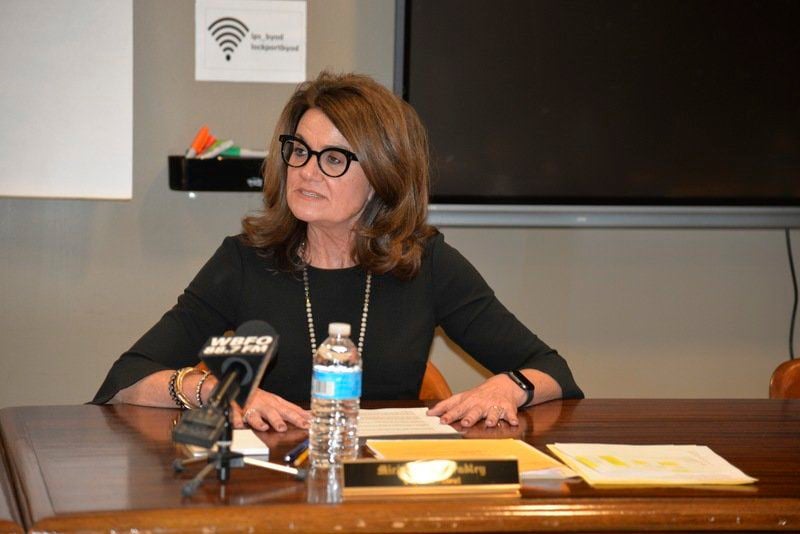 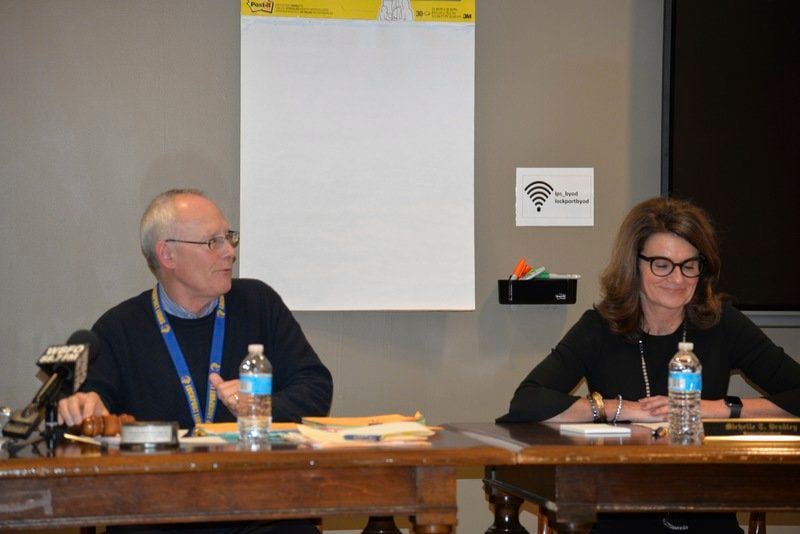 Connor Hoffman/staffLockport School Board President John Linderman and Superintendent Michelle Bradley on Wednesday took part in a discussion about the policy covering the use of the district’s new facial and object recognition system.

Connor Hoffman/staffLockport School Board President John Linderman and Superintendent Michelle Bradley on Wednesday took part in a discussion about the policy covering the use of the district’s new facial and object recognition system.

The Lockport school board has once again amended its policy governing the district’s facial recognition system.

The major policy changes, approved by the board during a meeting on Wednesday, include a scope section at the beginning of the policy clarifying that no students would be put in the database. The new policy also designates the president of the board of education as an individual who would receive notifications through the system. In addition, law enforcement agencies were added to the database.

The policy changes were recommended by the state education department. The system was activated by the district last week.

During Wednesday’s meeting, no trustees spoke before the amendments were approved. Superintendent Michelle Bradley gave brief remarks, saying the district feels it has satisfied the state education department’s privacy concerns with the revisions to the privacy policy. She specifically pointed to the portion of the policy that says “in no event shall a district student be placed in the Aegis database.”

“In the district’s view, there was no need to further delay the implementation of the Aegis system and its corresponding enhancement of district security pending the few policy amendments that were approved tonight,” Bradley said.

In an interview after the meeting, Bradley said the system has been performing “as expected.”

Another development on Wednesday was the return of lawmakers to the state legislature.

Last year, Assembly Member Monica Wallace, D-Lancaster, introduced a bill into the legislature that would implement a moratorium on facial recognition in schools until the state education department studies the issue further. The bill overwhelmingly passed the assembly but the companion bill was not voted on in the senate. Wallace told the Union-Sun & Journal she is going to prioritize the passage in the senate this year.

When asked about the bills, Bradley said the district will continue to monitor the legislature.

“Like we did with the state education department, we would be very open to working interactively and having dialogue with Assembly Member Wallace,” Bradley said.

Board President John Linderman said at the time the board of education will respect the state education department’s concerns of not having students in the system, but could not promise that will always be the policy.

“I think you always go back and you review it. Can I say we’ll never add student photos to the system? I can’t say that. At this time, there is no intention to do that. We’re going to respect the request of the state,” Linderman said in an interview following the meeting.

“The district will not expand the categories to be entered into the database, as specified above, except upon notification to and consultation with the Chief Privacy Officer of the New York State Education Department, and in accordance with all applicable law,” the policy reads.

The district’s use of the Aegis facial recognition system was stalled for months after the state education department told the district to hold off until its privacy concerns were addressed. Last spring, Bradley announced a goal launch date of Sept. 1, but that changed after the state education department warned the district in statements to the media that its concerns had not been adequately addressed.

The changes were implemented at the request of Temitope Akinyemi, the New York State Education Department chief privacy officer, who wrote a letter to Bradley in November, saying that if the changes are made, then the state education department will allow the district to use the system.

The district spent $1.4 million of the $4.2 million allocated to it through the New York’s Smart Schools Bond Act to acquire and install one the systems, one of the first of its kind in an American school. The system relies on the Aegis software suite created by Canadian-based SN Technologies.

In a surprise unannounced change, the New York State Education Department amended its website to explain the department is not currently appro…