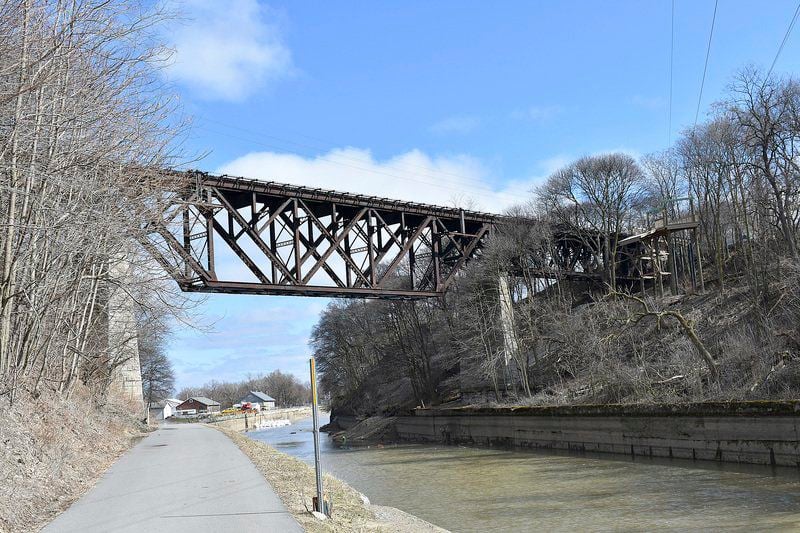 The Lock City's famous upside-down railroad crossing with footbridge over the Erie Canal. 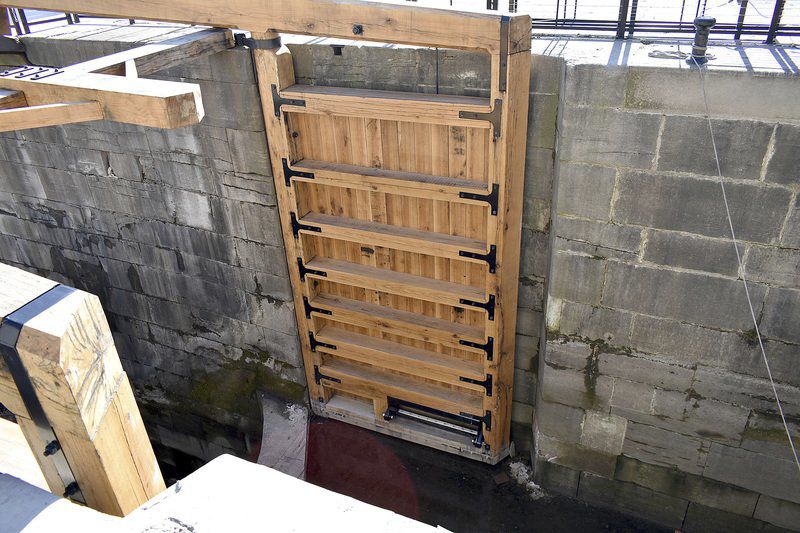 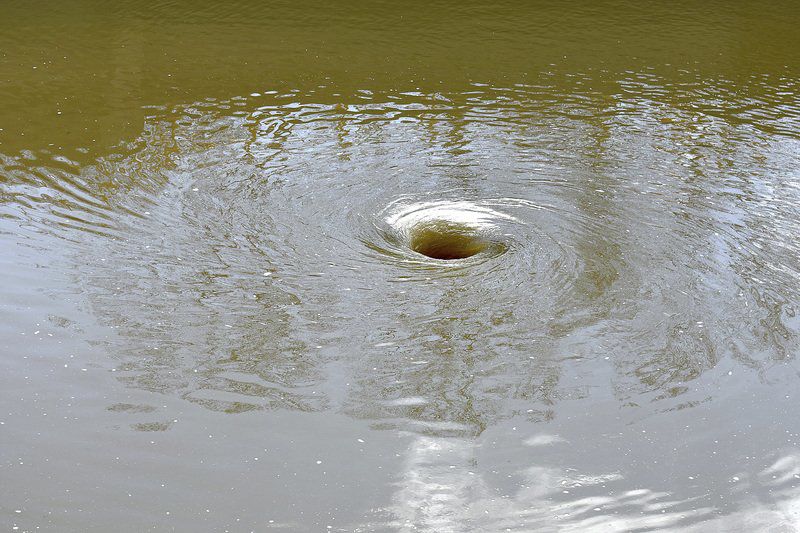 A whirlpool on the Erie Canal in the area where Eighteen Mile Creek passes underneath the canal. 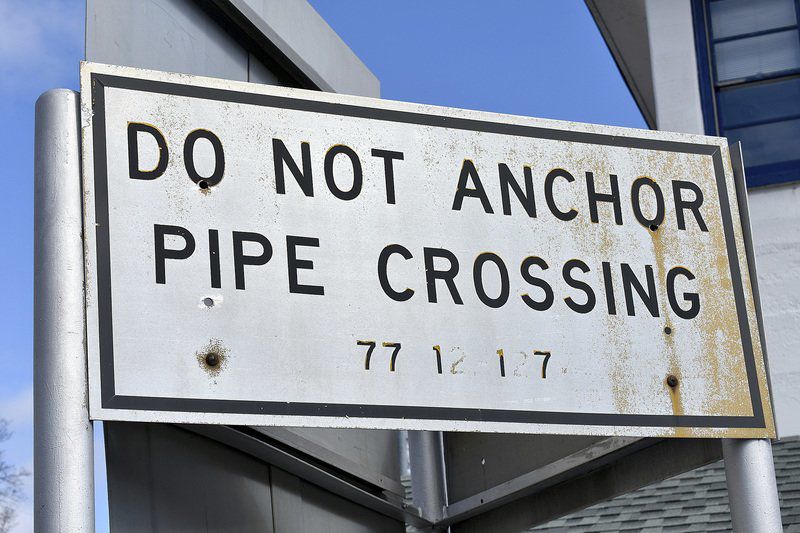 This sign references the pipe that carries Eighteen Mile Creek underneath the Erie Canal, near Josephine Carveth Packet Park off Market Street. 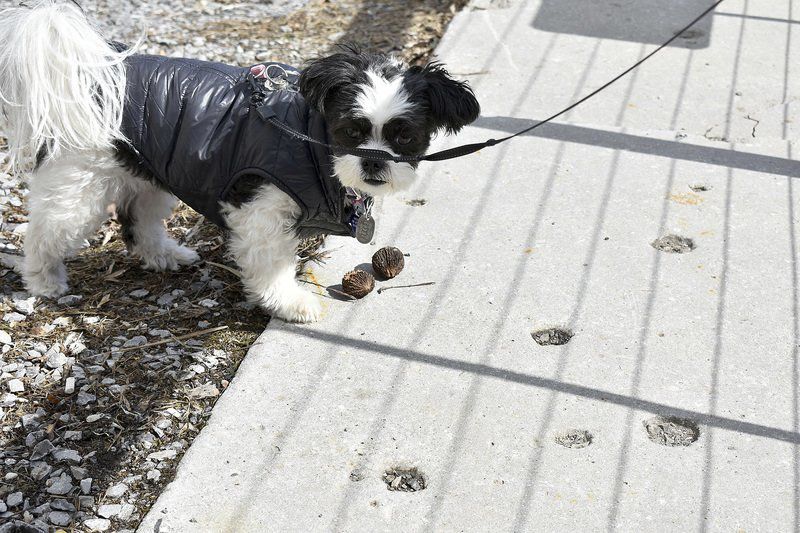 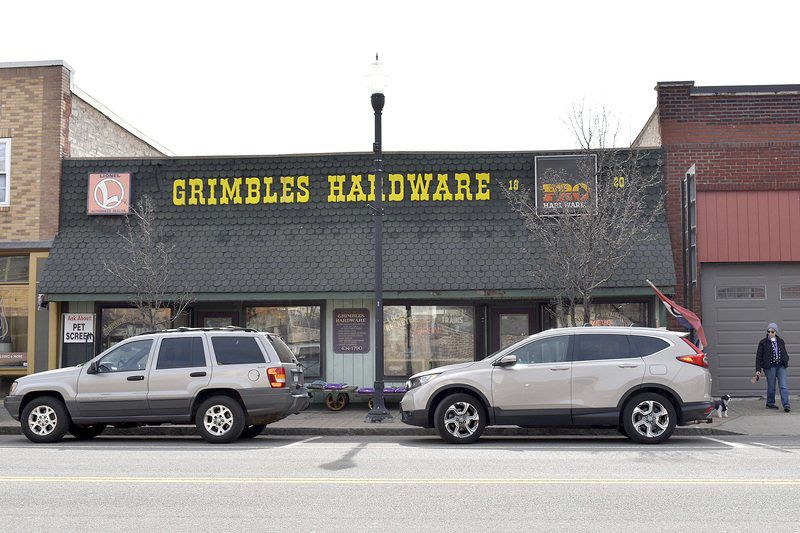 Where would one find the tools needed to rescue a squirrel trapped in a canal lock? Grimbles Hardware, 18 W. Main St., of course. 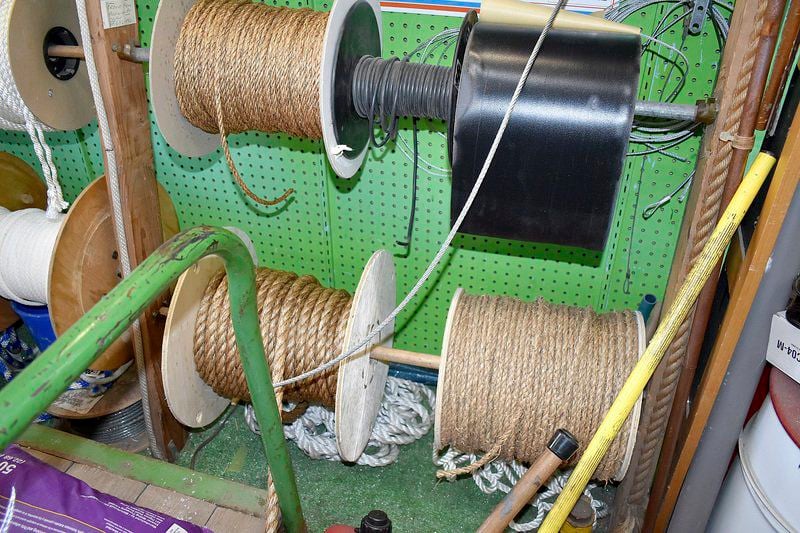 The rope selection at Grimbles Hardware. 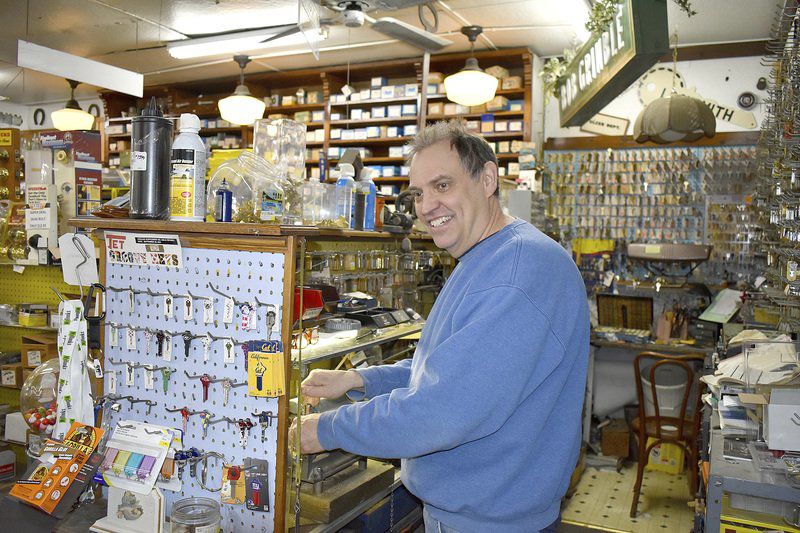 Doug Roberts, the owner-operator of Grimbles Hardware, with his 10,000 keys. 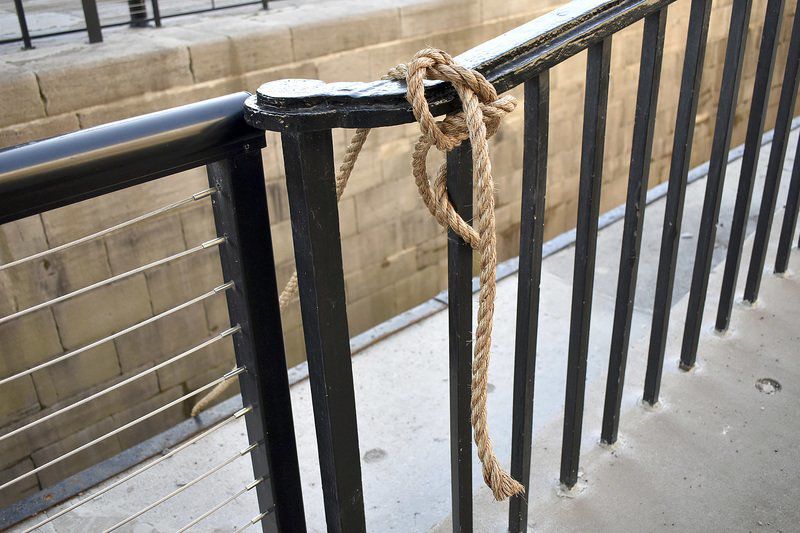 Jim Boles tied one end of a 40-foot length of rope to the canal lock guard rail and dropped the other end into the lock, offering the poor trapped squirrel a way out. 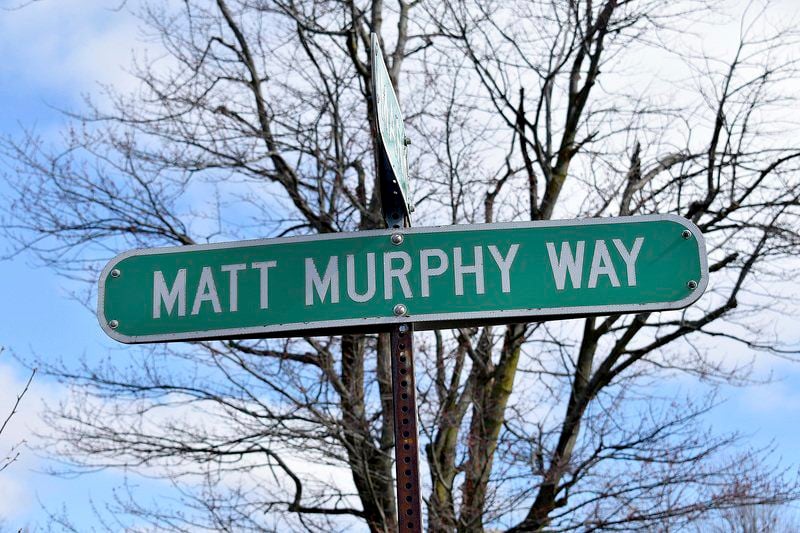 Matt Murphy Way is the name of the roadway connecting Market Street and Route 78 over the Erie Canal. It's named after the late beloved Lockport businessman and New York State Assembly Member. 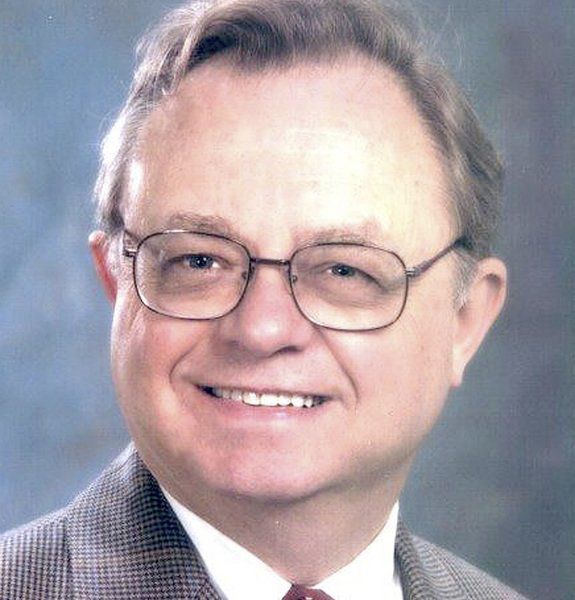 The Lock City's famous upside-down railroad crossing with footbridge over the Erie Canal.

A whirlpool on the Erie Canal in the area where Eighteen Mile Creek passes underneath the canal.

This sign references the pipe that carries Eighteen Mile Creek underneath the Erie Canal, near Josephine Carveth Packet Park off Market Street.

Where would one find the tools needed to rescue a squirrel trapped in a canal lock? Grimbles Hardware, 18 W. Main St., of course.

The rope selection at Grimbles Hardware.

Doug Roberts, the owner-operator of Grimbles Hardware, with his 10,000 keys.

Jim Boles tied one end of a 40-foot length of rope to the canal lock guard rail and dropped the other end into the lock, offering the poor trapped squirrel a way out.

Matt Murphy Way is the name of the roadway connecting Market Street and Route 78 over the Erie Canal. It's named after the late beloved Lockport businessman and New York State Assembly Member.

Niagara County is gifted with many professional and amateur historians. Great research is being done and reported. Sometimes I wonder if there is any history left to be discovered, given all the talent.

In search of some of this undiscovered history, my wife, Paige, our dog Moo-Moo and I set out to explore what Lockport’s famous cultural geographer, Pat McGreevy, has called the “mechanical heart of Lockport” — the famous Flight of Five locks or, as McGreevy named it in his excellent book on the Erie Canal, “Stairway to Empire” — and its surrounding impacts. McGreevy grew up on Ontario Street a block from the canal.

I come by interest in the canal naturally. At one time my family lived only a short distance away and the Irish immigrants on my mother’s side, Dugan, Madden and Sullivan, lived in the North End of Lockport; and family history has them periodically working on the Erie Canal.

With the Lockport Cave tour closed for the winter, in March, the area around the locks surprisingly still had quite a few visitors: tourists taking pictures, dog walkers and runners. Activity in this area is not seasonal. It was a bit cold, but people were out. The canal is partially drained, it is quiet, and everything is visible.

After parking off Ontario Street, our adventure started across from Lake Effect Ice Cream, 79 Canal St., with a walk down a short flight of steps to the locks. The old locks, the Flight of Five, are drained and all the old original finely cut stone, new thick wooden doors and the beautifully crafted heavy iron work are easily seen.

Midway on our walk, we passed the underground routing of Eighteen Mile Creek. Heading east on the towpath the creek passes under the canal and at one time powered a number of mills as it headed west and eventually north to Olcott. Mixed with canal water, this vigorous creek pours out of the canal bank, splashing the stone and brick ruins of the former mills.

In the middle of the canal, a large, powerful whirlpool has formed right where you would think the tunnel might be. We thought the canal might be leaking, but when I contacted the state Canal Corporation they reported that there are a number of drains in sections of the 524-mile canal that are used to adjust the water level and this drain into Eighteen Mile Creek is periodically opened. The ducks and geese stay away from this dangerous area.

Across the canal at Josephine Carveth Packet Park is the exit of Eighteen Mile Creek as it enters the tunnel that flows under the canal. If we could follow the underground creek south with a unmanned robot we would find a small cave entrance, now named Culvert Cave, which is believed to be a branch of the Lockport Cave. This is just east of Lockport Locks and Erie Canal Cruises at 210 Market St.

We returned from our walk and stopped at the old locks where Moo-Moo discovered that the floors were active with squirrels harvesting black walnuts. One lock had no escape route and the lone squirrel was looking for a way out. The squirrel kept throwing itself on the walls, clawing and falling off. It appeared tired and injured.

Thinking quickly, I realized Grimbles Hardware, just up the canal, is the only place you would go if you needed items to rescue a squirrel.

I entered Grimbles Hardware at 18 W. Main St. looking for a solution and found thick sisal tugboat rope, right away, at the front door. A little dusty — it was waiting for me — it had been there for years.

Grimbles, with a history going back 100 years this year, has a bit of everything. It is the first place you would go to get items to pull an animal out of the canal. I bought 40 feet of rope, after the owner, Doug Roberts, walked the length of the store to measure it, and decided that at 100 years of age Grimbles deserved a historical review — a quick one, as I had to get back to the squirrel.

The family has been in business in Lockport since 1920. The store was moved to its present location from Market Street in 1936. The West Main building was previously a livery, caring for horses and carriages. Into the 1940s the family ran mostly a garage with some hardware items.

In the late 1940s, Grimbles became a fully stocked hardware store with toys. The owners are proud of their Lionel train collection, having started out as a distributor in 1940. The basement, now with an extensive model train layout, was once the old work pit used to get underneath vehicles.

Now competing somewhat with the big box stores on Transit Road, Grimbles' strong points keep it in business. There's a better selection of nuts, bolts and dated hardware, plus more hands-on knowledge, and the employees have been helping to fix broken things in Lockport for more than 100 years. Doug Roberts is a key and lock expert and the shop can fix anything connected to the windows in older homes. Is there any other business in Lockport that's been going for 100 years, 80-plus on Main Street?

I thanked Doug for the history tour and began to realize that, if you look, history in Lockport is everywhere.

Returning to the squirrel, I tied the rope to a rail and dropped it 30 feet to the lock. The squirrel started to investigate the rope but was cautious. We thought it best to leave the rope overnight, believing that the animal would figure it out as the area quieted down.

We returned the next morning, stopping for strong coffee at the very busy SteamWorks Coffee House, 51 Canal St. , before heading down the nearby ramp to the canal. The rope was still there, and we could not see the trapped squirrel but decided to give it some more time. We continued down the canal path, east, looking for history.

We passed under the “upside down bridge,” an old railroad bridge that at one time had a walkway on the side for pedestrians. There is a rumor that the footbridge may be rebuilt. This seems like a good idea. You would have a great view of the locks and the canal and you could continue your tour visiting shops on Main Street, at the Bewley Building — Bling, Ticklebridge cooperative, Cousin’s Cafe — and down the Market Street hill to the canal cruise headquarters and ART 247.

My mind wandered to Western New York native Joyce Carol Oates’ mention of this railroad trestle in her writings about Lockport. In her book “You Must Remember This," which seems to describe a combination of mainly Lockport with a few other western New York locations, she brings the bridge up again: “… and the narrow plank footbridge that spanned the canal …” Years ago, I attended one of Oates' book signings. She mentioned the footbridge in her talk and we discussed it as she signed my book, agreeing that it was dark and scary but somehow an important memory.

Few adventuresome Lockport teenagers escaped a walk on the canal railroad footbridge. Just this year, in a March article in Smithsonian Magazine, Oates again referenced it — "… and on the shaky pedestrian bridge that ran unnervingly close beside the railroad tracks crossing the canal ... .”

Lockport has a famous footbridge with a great view, and it would reconnect parts of the city. Can it be restored?

We continued down the old towpath to Matt Murphy Way, the bridge named after the beloved Lockport resident who used to run a tire and auto repair shop on Park Avenue. We trusted him in his shop, and we trusted him in government, when he later became a member of the New York State Assembly. When something needed an answer, or some governmental intervention, Matt Murphy is who the residents would contact, and he was responsive and got the answer to their questions. The adults at weekend family gatherings would be discussing a local matter and the conclusion often was, "I will call Matt next week and find out.”

Although images tend to show Murphy in a suit and tie, I remember him in blue work clothes in his shop. That was quite a while ago, it qualifies as history, I think, and I am happy he was memorialized in this canal crossing. It brought back good memories, a time when we all had a different view of government.

We crossed Matt Murphy Way over to Market Street, clocking 1.6 miles from the locks. At the Exchange Street bridge, we passed back over the canal to the towpath.

Returning to the lock with the squirrel, we checked again and it was true: the squirrel had escaped. I gathered up the rope and put it in the trunk of the car. Contact me if you need it for a rescue.

Note: This adventure started when there were no social distancing rules. However, further on in our journey the guidelines were in place and SteamWorks Coffee House had marked six-foot spacing areas.

Because the gyms are closed, and many people just want to get out of the house for a few hours, this walk along the canal is a good way to get some exercise and view history. There is plenty of space for social distancing and a good walking path.

Jim Boles is a Lockport native with a keen interest in local history and cultural tourism. Contact him at jamesboles47@gmail.com .