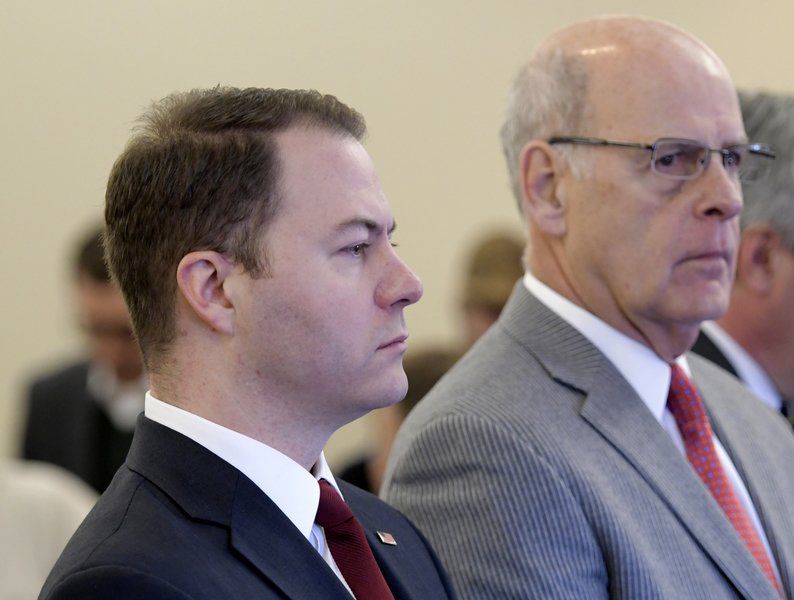 The Associated PressRepublican state Sen. Robert Ortt, left, with his attorney Steven Coffey, right, stands before Judge Peter Lynch for his arraignment in Albany County Court on Thursday in Albany. Ortt pleaded not guilty to charges that, as mayor of North Tonawanda, he arranged for a no-show job for his wife in order to pad his salary. Ortt dismissed the charges as politically motivated. 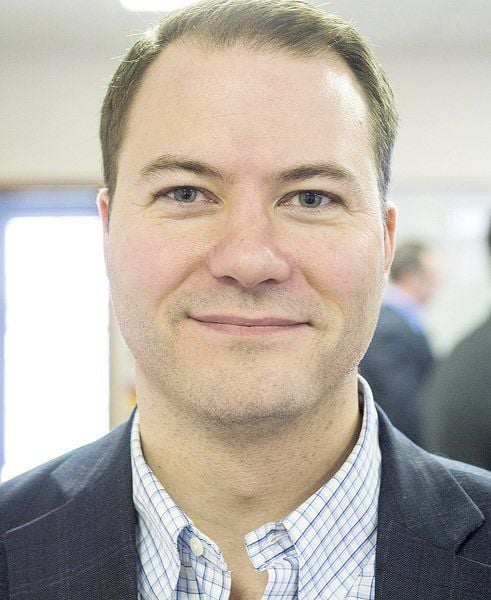 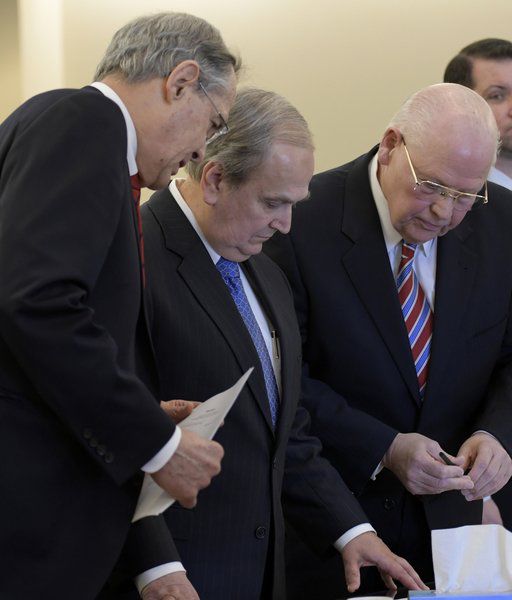 Former Republican Sen. George Maziarz, second from left, with his attorneys E. Stewart Jones of Troy, left, and Joe LaTona of Buffalo, center, stands before Judge Peter Lynch for his arraignment in Albany County Court on Thursday in Albany. Maziarz, pleaded not guilty to charges that he used campaign money to secretly pay an ex-staffer accused of sexual harassment. 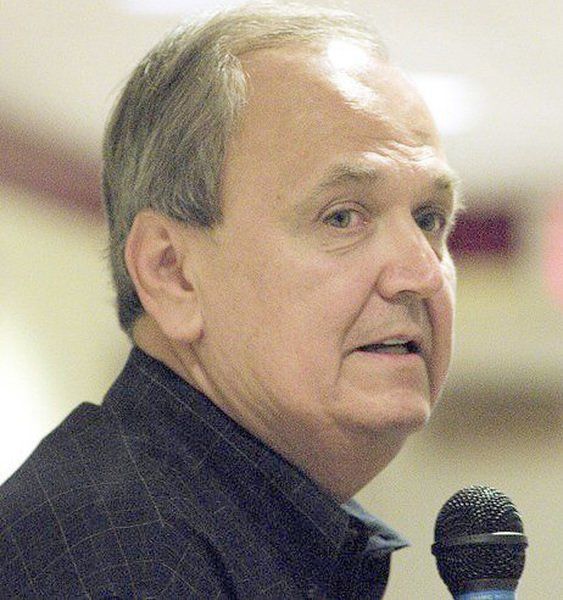 The Associated PressRepublican state Sen. Robert Ortt, left, with his attorney Steven Coffey, right, stands before Judge Peter Lynch for his arraignment in Albany County Court on Thursday in Albany. Ortt pleaded not guilty to charges that, as mayor of North Tonawanda, he arranged for a no-show job for his wife in order to pad his salary. Ortt dismissed the charges as politically motivated.

Former Republican Sen. George Maziarz, second from left, with his attorneys E. Stewart Jones of Troy, left, and Joe LaTona of Buffalo, center, stands before Judge Peter Lynch for his arraignment in Albany County Court on Thursday in Albany. Maziarz, pleaded not guilty to charges that he used campaign money to secretly pay an ex-staffer accused of sexual harassment.

Former New York state Sen. George Maziarz and his hand-picked successor, current state Sen. Robert Ortt, did not back down from proclaiming their innocence in a State Supreme Court courtroom in Albany on Thursday.

“All I have to say today is that George Maziarz is not guilty,” defense attorney Joseph LaTona said after his client entered a not guilty plea to five felony charges stemming from election law violations. “He looks forward to being vindicated in the courts.”

Ortt was just as blunt.

“I’m guilty of nothing,” he said. “I will fight these charges and I believe I will prevail.”

Maziarz — long considered one of the most powerful men in Niagara County politics — and Ortt, a former North Tonawanda mayor, were swept up in a public corruption investigation initiated by the New York State Attorney General’s Public Integrity Bureau.

Bureau prosecutors laid out their charges against Maziarz and Ortt in a grand jury indictment handed up Wednesday afternoon and unsealed following the pair’s arraignment Thursday morning. The grand jury action came less than a month after the state prosecutors opened up a probe into possible spending irregularities from both Maziarz’s now-defunct campaign fundraising committee and the Niagara County Republican Party’s fundraising arm.

The indictment charges that Maziarz engaged in a “multi-layered pass-through scheme” that enabled him to use money from his campaign committee, the Committee to Elect Maziarz State Senate, and also from the Niagara County Republican Committee, to funnel secret payments to a former senate staffer.

Though not identified in the attorney general’s court filings, it has been confirmed that the former staffer is Glenn Aronow, a former Niagara County legislator who was Maziarz’s director of community affairs before leaving that job in late 2011 amid allegations of sexual harassment from a fellow state senate staffer. Aronow served as a county lawmaker, representing Lockport, from 2002 to 2006.

State prosecutors charge that Maziarz’s campaign committee and the Niagara County GOP committee paid Aronow $49,000 in 2012 and $46,000 in 2013-2014, but that the senator didn’t want the payments made public. The AG’s office said Maziarz wanted “to conceal these payments — and to avoid public scrutiny of his decision to retain the former staffer for campaign-related work.”

Under the alleged scheme, Maziarz, “acting with others,” is accused of falsely reporting the expenditures on five separate filings with the New York State Board of Elections as payments to “pass-through entities, rather than to (Aronow).”

According to a court filing in the case, the committees made payments to a pair of unidentified public relations firms that then funneled the money to Aronow.

In the case against Ortt, state prosecutors charge that while he was serving as North Tonawanda’s mayor, he hatched a scheme to “pad his taxpayer-funded salary.”

Ortt faced a $5,000 pay cut by leaving his position as North Tonawanda’s clerk/treasurer and becoming mayor. To off-set that income reduction, prosecutors said Ortt “and others devised a pass-through scheme to pay Ortt’s wife for a job for which she performed no actual work.”

Prosecutors charge that Meghan Ortt received approximately $21,500 from 2010 to 2014 from a Lockport print shop that is also tied to the Maziarz scheme as a pass-through entity used to pay Aronow.

According to the indictment, Ortt’s wife did no work for the print shop. Meghan Ortt did testify before the grand jury investigating her husband.

“No-show jobs and secret payments are the lifeblood of public corruption,” Attorney General Eric Schneiderman said. “New Yorkers deserve full and honest disclosures by their elected officials — not the graft and shadowy payments uncovered by our investigation. These allegations represent a shameful breach of the public trust — and we will hold those responsible to account.”

As he did in the hours after his indictment, Ortt attacked Schneiderman, accusing the Democratic AG of attempting to advance a “well-documented, partisan agenda” by involving him in the probe. The Republican senator said he’ll remain in office and has no intention of resigning.

Ortt said he was “saddened” and “sickened” at the “ridiculous and baseless” charges.

“The only thing false in this case is the indictment that’s been filed which constitutes Schneiderman’s list of false charges,” Coffey said.

Before the attorney general’s probe, Maziarz had been the subject of an investigation by the U.S. Attorney’s Office for the Southern District of New York. That office had been attempting to resurrect the work of the state’s defunct Moreland Commission on Public Corruption.

The federal investigation had been spear-headed by agents from the Buffalo Field Office of the Federal Bureau of Investigation.

“As we have seen too often in Western New York, this case presents another instance when public officials served their own interests instead of those to whom they were positioned to serve,” Adam Cohen, the special agent in charge of the Buffalo FBI Office said. “The defendants are alleged to have chosen greed over good and their behavior compromised the integrity of government.”​

A spokesperson from Schneiderman’s office also dismissed claims that the investigation was politically motivated. They noted that Schneiderman has been involved in the prosecution of public corruption cases involving Republicans and Democrats, including a pending case against former Erie County Democratic Party Chairman and longtime Western New York political operative G. Stephen Pigeon.

The charges against Maziarz and Ortt, first-degree filing of a false instrument, carry a maximum possible prison sentence of one and one-third to four years on each count.

While Ortt was eager to speak to reporters outside the Albany courtroom, Maziarz was whisked away by his lawyers.

When a reporter asked the long-time state senator if he had anything to say to his former constituents, defense attorney E. Stewart Jones, Jr. replied, “He’s not talking.”