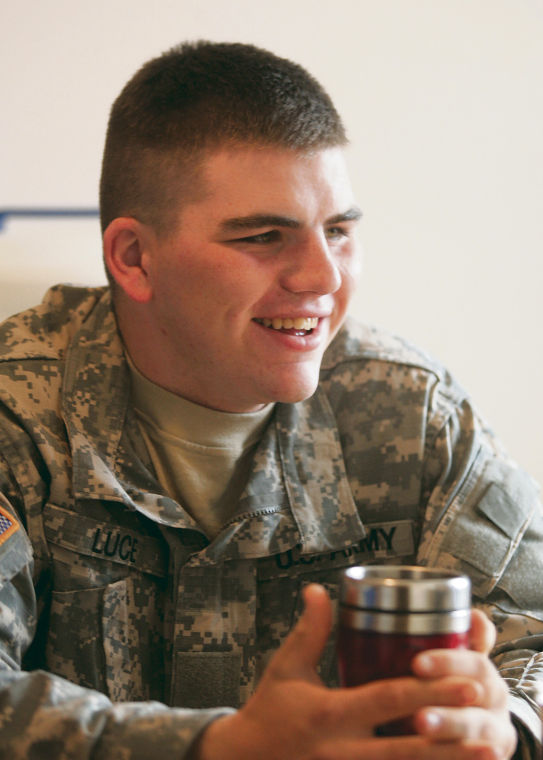 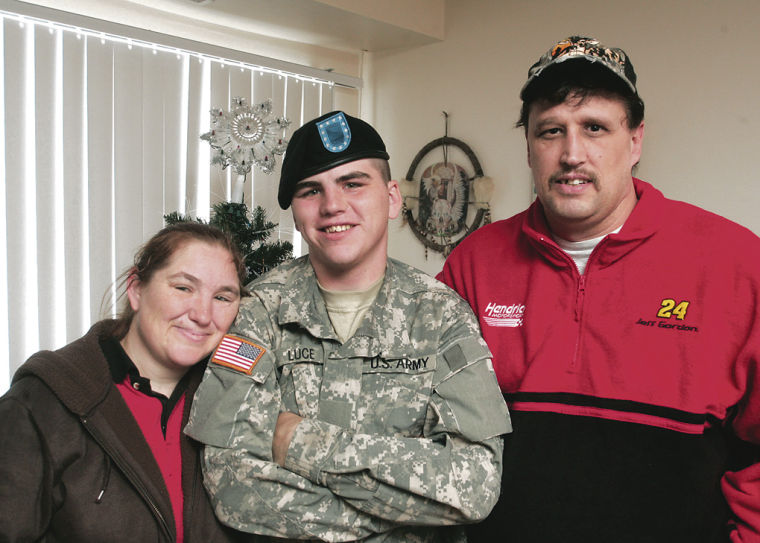 For one Lockport family, the holidays were made a bit cheerier by a welcome homecoming. U.S. Army Pvt. Maxwell Luce, 19, has spent the past week at his parents’ home on Ruhlmann Road, taking a short break from training before heading back to Arizona. Luce is a 2008 graduate of Lockport High School. He was drawn to the military after speaking with a recruiter in the cafeteria. “In the past five years, I’ve been thinking about my future and what I was gonna do,” he said. The recruiter told him about the money offered by the Army for college, and after thinking it through, Luce decided it was the best course of action for him. He spoke with his parents, Ray Sherman Jr. and Harriet Luce, about the decision. “He came to me and said, ‘Well, I’m thinking of joining the Army.’ ” Sherman said. “I said, ‘Are you sure?’ I had to ask him if he was sure, like, 10 times. ‘Are you sure this is what you want to do? Are you positive?’ And he said, ‘Yeah.’ ” In August, he traveled to Fort Sill, Okla., for basic training. For his parents, the separation has been tough at times. “You don’t realize what the feeling is, until he’s gone for a while,” he said. “You don’t know what the loss is until they’re gone.” Luce has enjoyed training so far, though he said his drill sergeants were sometimes tough on the recruits. “You’re doing push-ups, you’re doing jumping jacks, you’re doing whatever they can think of to punish you for no reason,” he said, laughing. But all the physical training helped him get in shape. When he left for basic training, he weighed about 215 pounds, and now he weighs about 173. “I can do a hundred times more push-ups than I could before,” he said. He graduated from basic training Oct. 17, which was “the best day of my life,” he said. He’s now in training at Fort Huachuca, Ariz., where he has been since October. He flew in to Buffalo on Dec. 20 for his holiday break. When he arrived at the airport, he zeroed in on the one thing he recognized in the crowd — the bright orange of his father’s hunting jacket. “In the middle of the airport, you could see an orange coat,” Luce said. “That was one of the happiest feelings in the world.” He ran for Sherman, almost running right past his mother. “He didn’t even see me,” Harriet Luce said, laughing. “As soon as he saw me, he started running toward me,” Sherman said. “He almost passed her.” They said they were surprised by the reception at the airport, where strangers stood and clapped for Luce as he walked by in uniform. Luce said he was in the airport in Charlotte, N.C., when a woman walked up and handed him a card thanking him for his service to the country. Inside the card was a $20 bill. “And then I was over at the bank, and this guy out of nowhere just handed me a $20 bill and said, ‘Thank you,’ ” he said. “Before, when I wasn’t in uniform, I didn’t see the support that we do get.” The family will spend the holidays together, and Luce will return to Arizona on Jan. 3. He said he doesn’t know when he’ll be able to come home again. He graduates from training in March, and he might be sent on a 90-day “quick start” deployment after that. “I might want to do that, because 90 days’ deployment gets me that experience,” he said. Right now, he’s training to be a human intelligence collector — learning how to talk to people and find out what is needed. In places like Iraq, he said he would talk with Iraqis about what they need to help with rebuilding. “I see what I can do to help them out,” he said. “That’s what we’re trying to do now, is rebuild them up, after Saddam Hussein. It’s been five years, but there’s still a lot. They plan on pulling out in 2010 with Obama, but we’re still gonna be there like any other place. ... We’re there to do what we can to help the people out.” He has a six-year contract with the Army, and once that is up, he said he’ll decide whether to sign up again. In the more distant future, he’s considering a career in law enforcement. For now, he’s enjoying his time with family, and looking forward to accomplishing more in the future. “There were a lot of friends who didn’t think I could do it,” he said. “I proved a lot of people wrong.” Contact reporter April Amadon at 439-9222, ext. 6251.