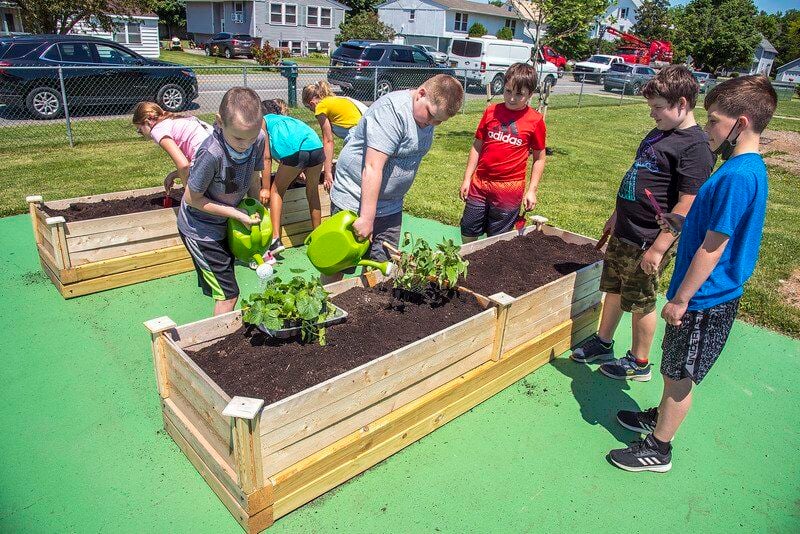 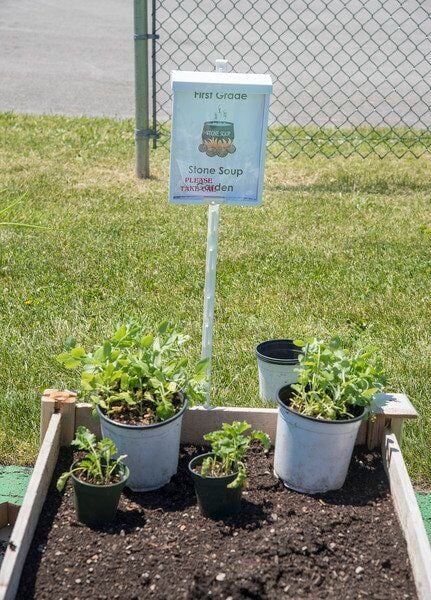 Peas, potatoes and carrots will grow in the “Stone Soup” bed at the Roy-Hart Elementary Outdoor Learning Lab.

A dozen raised garden beds were planted by students at Royalton-Hartland Elementary School on Thursday. The on-campus vegetable garden is an element of the school’s Outdoor Learning Lab, designed to provide hands-on agriculture education.

Peas, potatoes and carrots will grow in the “Stone Soup” bed at the Roy-Hart Elementary Outdoor Learning Lab.

A dozen raised garden beds were planted by students at Royalton-Hartland Elementary School on Thursday. The on-campus vegetable garden is an element of the school’s Outdoor Learning Lab, designed to provide hands-on agriculture education.

GASPORT — Children gathered around raised garden beds behind Royalton-Hartland Elementary School on Thursday to plant vegetables that will be harvested upon their return to school in the fall. The planting was part of the first phase of the school’s new Outdoor Leaning Lab.

District superintendent Hank Stopinski pointed to several locations within sight of the dozen raised beds that were built on a small basketball court, painted green, and explained how RHES will be transformed by the program.

“There’ll be a stage or sitting area where students can go outside for any class, whether it be ELA or math or science or they want to do a choral presentation. That’s going to be set up there,” Stopinski said. “There will be a mini-playground area, but more fitness oriented. In these other areas we’re going to have strawberries and blueberries. We’re going to do a butterfly garden. On the opposite side of the building we’ll have a weather station (and) bird houses. So, the hope is to take the students out of the science classrooms to out here.”

Each raised bed was filled with different plants according to what meal they would make. The list included pizza (tomatoes, basil and peppers), stone soup (peas, potatoes, carrots), little dippers (broccoli, cucumbers), salsa (cilantro, peppers, tomatoes, onions) and another combination of crops known as “Three Sisters.”

“This is a Three Sisters garden. In Native American culture, you would plant corn in the middle, and around the corn you’d plant pole beans which would climb up the corn and produce beans; then in the ground, we plant squash, which keeps the moisture in the ground and keeps weeds out,” Stopinski said. “So, it’s called Three Sisters. They pair the three of them and that will all grow.”

Fourth-grade teacher Jessica Monaco said she had waited a long time for the events of Thursday.

While she talked about the project, Monaco directed students where to plant squash and zucchini. She said the Outdoor Learning Lab had been three years in the making, beginning with a simple conversation with Stopinski about the need to cultivate hands-on learning with nature. The work done at the school was a team effort, she added, including the manual lifting of soil by the school’s building and grounds workers.

Tim Pietrowski, director of operations and facilities, said he and his employees were happy to help.

“It’s a group effort. They come down here to help out, they got the cement painted, they got the boxes built,” he said. “Supplies came through Home Depot and Lakeside Sod donated a cubic box of compost. They really helped us out.”

The best part, Stopinski, said is the way the students have reacted to their new lessons.

“What do you guys think of all this?” he asked the students. “Is it cool?”

“What’s so cool about it?” Stopinski inquired.

“We get to eat them when they’re grown!” chimed in another.

The project was funded through state Department of Environmental Conservation remediation of Roy-Hart district properties, which FMC Corporation was required to finance. According to Stopinski, normally all funds would be directed to the state, which would then choose where to spend them, but FMC asked to deliver $750,000 directly to the Roy-Hart district and offered to give an additional $250,000 to ensure it.

“About a year and half ago we were awarded $1 million to make this happen,” Stopinski said.